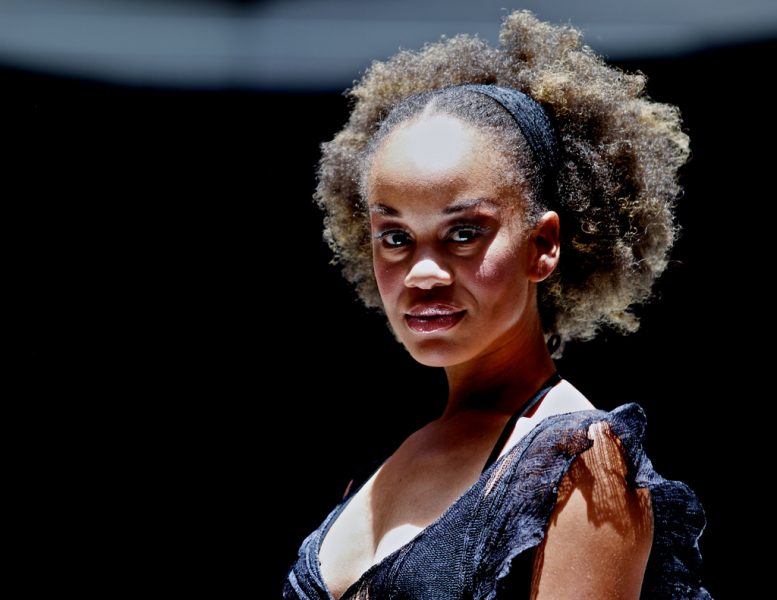 Would this bare-armed woman be allowed into a public building in Jamaica? If the current dress code status quo remains, probably not. Photo by flickr user AntonSLarsson, CC BY-NC-ND 2.0.

Jamaica is a hot country, and with climate change it's getting hotter. On August 3, 2017, the country's meteorological service registered a record high of 36.9 degrees Celsius in Kingston, the capital.

So, with all this heat, why do Jamaican women (and men) need to cover their arms (and legs, and feet) when visiting a government office or institution? Because of a set of dress codes — an issue that was recently raised on Twitter, with traditional media quickly catching on to the debate.

The discussion is not at all new. In 2010, The Gleaner newspaper reported that the dress code pertaining to government entities was not even relaxed in emergencies. In one instance, this resulted in the death of a woman who “was killed minutes after she was reportedly turned away from a police station because she was instructed by a policeman to get ‘properly dressed’ before entering the station.”

Several years ago, there were persistent complaints in the media, including this 2014 letter to The Gleaner newspaper, in which the writer concluded, “Perhaps Jamaica would now be First World if we stopped majoring in the minor.”

Even grief-stricken parents and relatives are turned away from public hospitals if they are deemed to be inappropriately attired. Most of the time, one's attire is the very last thing on one's mind when a loved one is seriously ill. It is heartless to turn away someone for wearing the same clothes that they would wear in any city capital.

The dress codes for government institutions are ridiculous, hypocritical, unfair, sectarian, archaic, bigoted nonsense. It's time to get rid of them. Short of exposing private parts, I can't imagine how one's attire can influence the way that business is conducted on government property.

In fact, there is no Jamaican law prohibiting sleeveless dress for men or women; but almost all government agencies have a notice on the door stating that the dress code includes (but is not limited to): strapless blouses, sleeveless blouses, tank tops, low cut blouses, short mini skirts, tube tops, shorts (for women); and shorts, slippers, low-slung pants, undershirts (for men). The list of prohibited items for women is usually longer.

There followed a slew of personal anecdotes from Jamaicans, who had visited government offices and were turned away:

Went to get a yellow fever shot, after waiting 20 mins to register, was told that I couldn’t get the shot because my top was sleeveless

A friend was turned away from a govt office because he was wearing slippers while suffering from a foot ailment even with a doctor's note.

Even television reporters visiting a government-run open air greenhouse were not immune:

The same television station devoted its weekly current affairs program to the topic:

There are Jamaicans who are being denied services that they are entitled to because of these dress codes, says @garveygirl. Yes, a serious issue to be addressed. @djmillerJA #TVJAllAngles pic.twitter.com/RGlDLYGfpw

The host of the show took the opportunity to make a “sartorial statement” in the studio:

Some noted the double standards in Jamaicans’ adherence to — or disregard for — rules. Broadcaster and educator Fae Ellington tweeted:

It's amazing how many Jamaicans are quick to utter ‘rules is/are rules’ when it's a discussion about women's sleeveless outfits but often break rules that could cause death. For example, the rules of the road. ‘Mout mek cross way if seh anyting’. #Rulesarerules

One tweeter referred to a British comedian, who portrays an overdressed rapper:

In #Jamaica offices and state buildings, women are expected to dress like #BigShaq ? No sah! #armsout we deserve the #RightToBareArms pic.twitter.com/lkcqIPORr1

However, not all Jamaicans were opposed to the dress code. One of the arguments for the “no bare arms” policy was hygiene:

Good morning to everybody, except those who make a big stink about having to dress properly to go into ppl's offices…have a care for the workers who don't wish to interact with your underarms…

The perspiration argument was refuted by some:

Sleeveless can't be less hygienic than sleeves. The heat while wearing clothes creates more sweat, and that is the best bacteria growing environment. #tvjallangles

However, many Jamaicans were quite happy to follow the rules, as one television viewer noted:

It is striking how many people in the vox pop said “Rules are rules.” #sleeveless #TVJAllAngles @djmillerJA pic.twitter.com/69f2DbUwHO

Will there be an online petition? Not yet, it seems, although one television commentator mentioned plans to post one on the Office of the Prime Minister's Jamaica House Petition portal:

Donna Scott-Mottley says she has a volunteer who is going to set up an online OPM petition re the sleeveless rule. @djmillerJA #TVJAllAngles pic.twitter.com/r0Q9r5gSA5

However, most of the current petitions are currently languishing with very few votes between them. So far, there are none on the dress code issue.

Nevertheless, an informal online media poll showed 72% of readers supported the relaxation of the sleeveless rule.

Latching on to the social media discussion, the Jamaica Observer consulted with a well-known human rights lawyer, Bert Samuels, who suggested that refusing to grant entry to public buildings because people are dressed in sleeveless clothing “could offend their constitutional right to liberty, freedom of association and freedom of movement”. He added that the legislation which addresses clothing is the indecent exposure law, which is really intended to prohibit the exposure of private parts.

Time for my legal profession to challenge this nonsense in the courts.

The newspaper featured the contentious issue on its front page:

Unconstitutional and colonial! No Jamaican must be denied access to public Services based on this nonsense rule. ???? pic.twitter.com/RB5KoZvgN4

Perhaps unsurprisingly, there are always Jamaican entrepreneurs (whom some might call “hustlers”) ready to profit from the situation, with some renting appropriate clothing outside some government offices.

While former First Lady of the United States, Michelle Obama, was well-known and admired for her sleeveless fashions, overseas-based educator Grace Virtue likened the dress code to “Trumpism”:

Trumpism : When you live in a tropical country (96 degrees in the shade…) and thick long-sleeved lined polyester suits are accepted as proper dress code and a sleeveless shirt is a violation. Trump is a metaphor – for ignorance and the utterly absurd! I don't even know about the legality but I am certain of the stupidity!

It is notable that this is not a purely Jamaican phenomenon; according to a number of online sources, including this post from Barbados, it is common elsewhere in the English-speaking Caribbean.

There has been very little response from any government agency or institution to the most recent uproar over the rules. Apart from social media outrage, there has also been very little in terms of action, which may suggest that this may continue to be an unresolved issue two or three years’ from now.