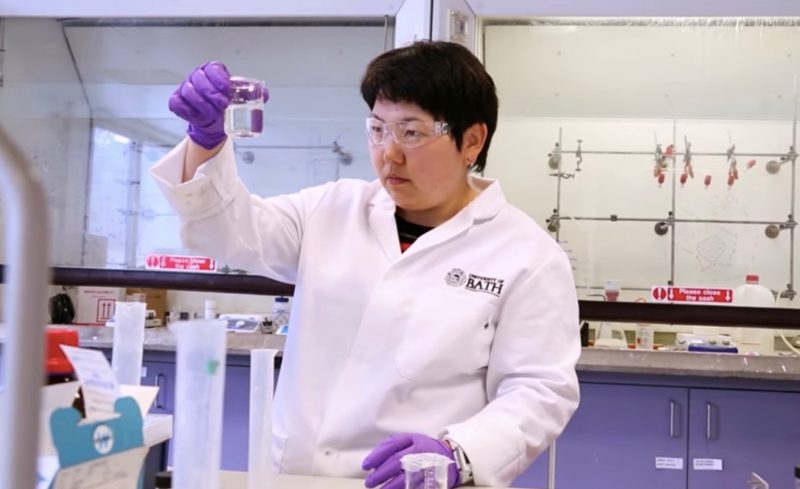 When a prominent businessman set Kyrgyzstan's social media space alight by calling female leadership “nonsense” and equating feminism with “terrorism”, it was a woman scientist from the Central Asian country who provided the perfect response.

Biochemist Asel Sartbaeva and the British University of Bath triumphed in the Biotechnology Award category at the IChemE Global Awards ceremony held in Birmingham on November 2, delighting compatriots in her homeland.

According to IChemE, Bath’s Biotechnology project spearheaded by Sartbaeva “uses silica to protect vaccines from spoiling, and reduces the need for cold-storage equipment.”

In the video below, Sartbaeva describes how she first became interested in developing a technology that IChemE says “could go on to save millions of lives” by keeping vaccines secure in unconnected locations.

After the birth of my daughter I took her to the doctor to be vaccinated. The doctor took the vaccine out of the fridge and was going to administer it. And I naively thought he was going to warm it up. But he said, “No, no, no, because if we warm it up it would denature.”

And I thought, OK, I know nothing about vaccines, so I started searching and found out that vaccines need to be stored in refrigerators all the time. That is when I thought I can maybe use silicon to cage them so they don't unfold.

The news of the award came just days after Babur Tolbayev, the founder of one the country's most successful micro-credit institutions made waves by comparing feminism to “terrorism” and calling the idea of female leadership “nonsense.”

In an interview with a local talk show, Tolbayev, whose Mol Bulak company lends money in Russia as well as Kyrgyzstan, said:

Many women want to be superbusiness-women, leaders. Sorry, but this is all nonsense. Feminism — is terrorism. A form of radicalism. 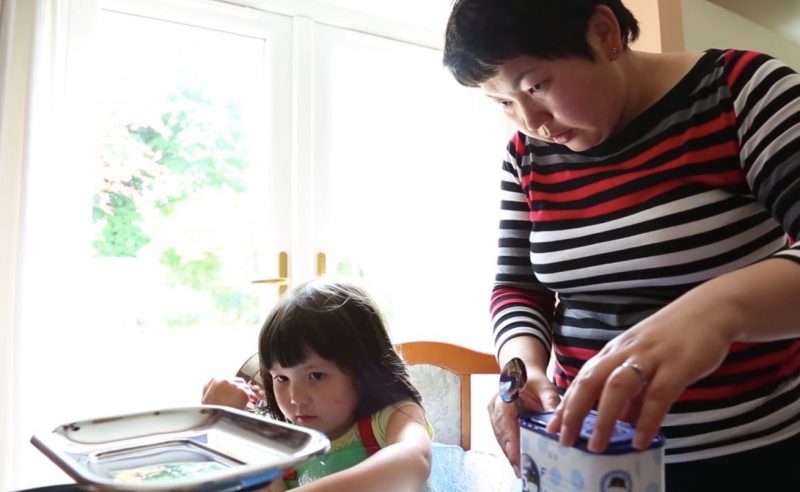 As journalist Bermet Talant kyzy noted in a blog, these were strange words coming from a man whose business includes several female top managers and has provided countless loans to a mostly female client base, including for start-ups.

Talant kyzy concluded that Tolbayev, who styles himself as a philanthropist, was “a big hypocrite”:

Seemingly, women for Tolbayev can be divided into two categories: those that serve him, like his wife, and those who help him increase his wealth, like his company's staff and clients.

On social media, links to Tolbayev's interview circulated for days.

In a Facebook post, children's author Altyn Kapalova accused Tolbayev of misunderstanding feminism and came up with a name for a character based on him that may yet feature in one of her books:

Feminism is not an adherence to some kind of views. Feminism is simple and normal practical actions that neither restrict nor privelige women. #TheKingofDiscardedSocks 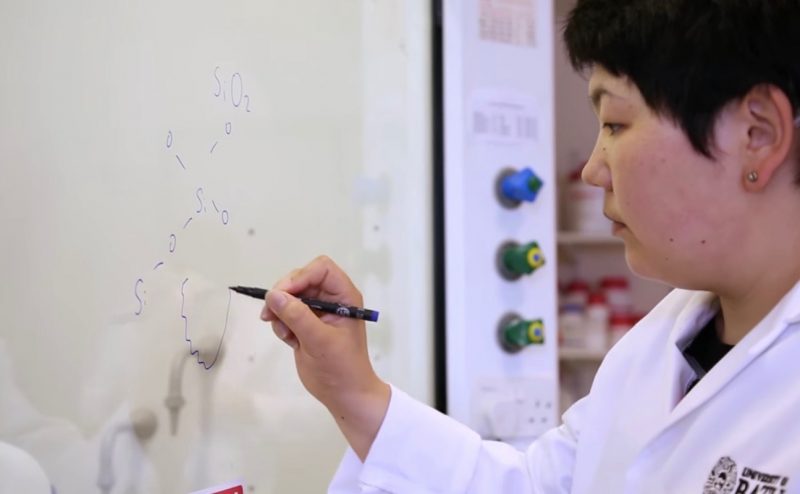 I understand that at one point men were hunter-gatherers, ran around with clubs and so on. But a lot of things have happened since then. Today, a woman doesn't need feeding [by a man]. We see this in the context of Kyrgyz labour migrants, when sometimes a female migrant is feeding whole families. And these are things that women achieve in some of the worst imaginable conditions. Now imagine what kind of successes a woman would have if she enjoyed the support of her husband, family and the state.

Where is the surprise? Babur Tolbayev is a typical representative of Kyrgyz business circles, for whom a woman is second-grade human.

Tolbayev subsequently attempted to explain his remarks. He acknowledged that his comparison between feminism and terrorism was an “exaggeration”, and claimed he stood for “a correctly implemented gender policy” that allowed men and women to pursue their own life and career goals equally.

Nevertheless, he argued, women were the “foundation of the family”, which justified his comments during the interview that having a family is “better than any MBA” for a woman, and that women should try to “have as many children as possible” before they reach the ages of 35 to 40.

Understandably, few were convinced by the backtrack:

Just days later, however, with the news of Asel Sartbaeva's award, Kyrgyz women had an example of exceptional leadership to celebrate, as well as an excuse to troll Tolobayev on social media: 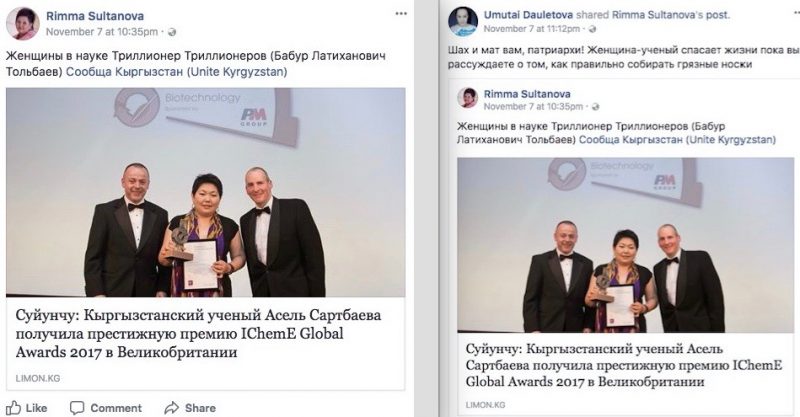 Rimma Sultanova's post (on the left) says “Women in Science” and is addressed to Tolbayev. Umetai Davluetayeva's post (on the right) says, “Take that patriarchs! A woman scientist is saving lives while you make judgments on how to correctly collect dirty socks!” 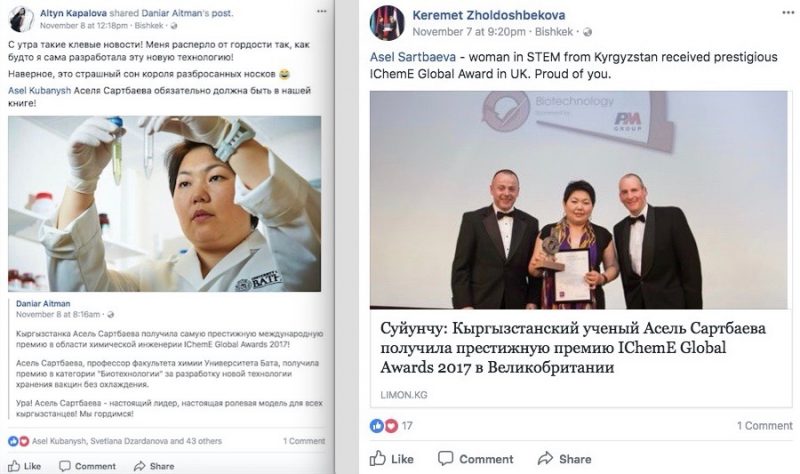 Altyn Kapalova's post (left) says: “Such cool news! I have been walking about with pride as if I developed this new technology by myself! Probably, this is a terrible nightmare for the King of Discarded Socks.”

To find out more about Dr. Sartbaeva's journey to the forefront of international science, read this interview with her on the website of the Royal Society of Chemistry.