A Game of Inches: Watch the Georgian Try That Sent Rugby Fans Into Raptures 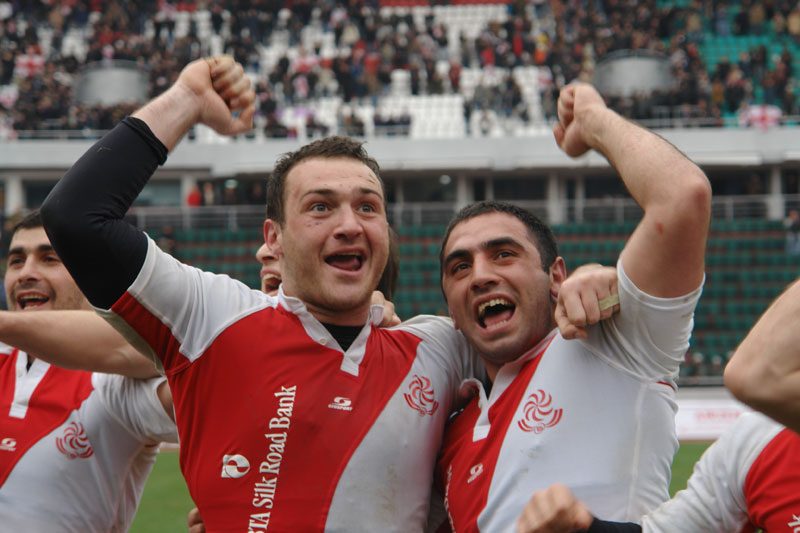 The ex-Soviet nation of Georgia is gradually building itself a reputation as an emerging force in the sport of Rugby Union. Moments like this one help that cause.

Georgia was already beating Canada by a comfortable margin — 40 points to 22 — when the Caucasus country's full back Soso Matiashvili decided he fancied some more.

The fan-powered sports blog Pundit Arena described Soso Matiashvili's second try of the game that took place in the Georgian capital Tbilisi on November 11 as “a piece of individual brilliance from the 24-year-old.”

Matiashvili spotted some space in the Canadian backfield and kicked the ball deep from the halfway line. He used his blistering pace to catch up with the ball and spectacularly dove on it just before it went dead – incredible.

In Rugby Union a try is scored “when a player touches the ball down inside the opposition's in-goal area between the try line and dead ball line.” Matiashvili got just enough contact on the ball at just the right time. Al Pacino, famous for his “Game of Inches” speech in the American Football-themed movie Any Given Sunday, would surely have approved.

He wouldn't be alone. Despite the fact that the friendly game that finished 54-22 in Georgia's favour was of little consequence, fans of the sport piled in on the Georgian Rugby Federation's tweet hailing the try:

Wooooow! I wish I had seen this in real time. The speed those legs were pumping at, to reach the ball. AND ground it! Amazing! Bravo ?????? #Try!

This is the reason rugby is one of the best sport in the universe. That attempt was pure dedication and he nailed it ??✌️

Canadian outlet the Province hailed Matiashvili and his team in a sober reflection on the defeat:

The Canadians did a fine job in the first half on defence, disrupting more than one Georgian attacking move but that strength fell away in the second half.

Georgia played with pace and power and the Canadians struggled to match. Tbilisi has never been a kind venue for visitors so that’s something for Canada to point to, but it’s also worth noting the last encounter in the Georgian capital four years ago was a narrow four-point victory for the home team, a game which might have been a Canadian win but for a moment of extreme violence by the Lelos that turned the game on its side.

It’s also worth noting Soso Matiashvili was deadly for Georgia, recording 34 points including a spectacular chased-down try. The 24 year old was electric with the boot, bringing a backline dimension we’ve not always seen from Georgia.

The bigger picture question that will linger after the gifs disappear from social media timelines is where Georgia's national team can go from here.

Since rugby world rankings were first introduced in 2003 the country's worst rank has been 23rd and its best 11th. They are presently 12th and peering in on a top ten that includes all the sport's traditional powers, topped off by the indomitable ‘All Blacks’ of New Zealand.

In 2019, Georgia will come up against three teams from that elite in the form of Australia, Fiji and Wales in the tournament's ‘Pool D’.

A win against any of those would be something of a quantum leap for Georgian rugby.

After all, previous iterations of the tournament failed to deliver the big scalp that local fans of the sport have been waiting for.

But following Soso Matiashvili's incredible try, the impossible might suddenly seem possible for the Caucasus team.