In a Video Testimony, Mothers Expose Horrible Situation Inside a Venezuelan Children's Hospital 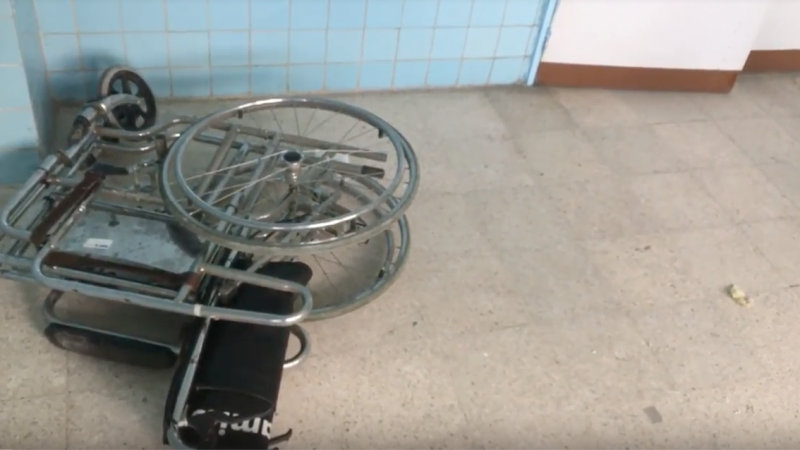 A screenshot from the video made by Prepare Family.

The serious problems facing public hospitals in Venezuela continue to grow with very little help being given by the state and very little attention being paid by the media. Nevertheless, non-government organizations like Prepara Familia (Prepare Family) make use of the Internet to draw attention to these issues. For instance, the organization has made a video in the nephrology ward of Juan Manuel de los Ríos Hospital in Caracas, the country's capital, and presented the difficult situation the patients and their families are in.

The amount of time the patients have spent in the nephrology ward in that hospital has created bonds that are almost equal to those of a family. The mothers make a community and support each other to make up for the shortcomings of their surroundings and the difficulties of the treatments. However, since mid-2017, several of the littlest patients in the waiting room have died, one after the other.

Although the hospital denies it and the authorities had attempted to hide it, some of the rooms and pieces of equipment have shown signs of being contaminated. Studies conducted by the Health Technology Unit of Simón Bolívar University suggested the presence of total coliforms, fecal coliforms, and airborne mesophiles. The machines that the hospital uses to clean the blood of the children contaminated them and were not promptly attended to due to budget constraints. Because of this, some of those who went to this hospital to get better only found themselves in worse conditions.

In the video, the mothers of the patients of the nephrology department of Juan Manuel de los Ríos Hospital tell of the complications that come with the lack of proper hygiene in the hospital, like the infections that further complicate the state of their children's health. In general, children who need dialysis go to the hospital at least twice a week for treatments so when finished they can continue leading normal lives.

This has been very difficult […] I don't see any improvement in my son's health. This situation is horrible.

For many of the families affected, the true epidemic is the mismanagement of the government. There are no replacements for the reagents that are used to perform the exams, and the costs are unmanageable. There are no ambulances to transfer the families to other hospitals. At times there was not even enough food in the hospital and they were depending on donations.

In the video, which was first presented on July 5, 2017, the mothers of Deivis, Rafael, and Cristhian – all three of whom are patients of the department – spoke about the situation of the hospital, the lack of maintenance, and the constant infections. Complaints have been made previously before the Office of the Public Prosecutor but they were not allowed to enter with lawyers. The courts also have not accepted claims made by CECODAP, an organization dedicated to the defense of the human rights of children, that has repeatedly called for the acknowledgment of the emergency.

The mothers of the three children who died during August and September gave their testimonies in the video. The number of children who died from infections in the unit has since risen to seven. It was reported in the description of the organization's video that:

At the time this video was recorded, three children (Raziel Juare, Samuel Becerra, and Dilfred Jimenez) had died and Daniel Laya died during the filming, tragically infected with bacteria. The audiovisual piece was presented in auditorium Number 163 before the CIDH celebrated the fifth of July, 2017 in Lima, Perú by CECODAP, Prepara Familia, and Judith Bront, the mother of Samuel Becerra, one of the dead children. Since then, three more children have died due to the contamination in that hospital. Their names were: Deivis Perez, Rafael Velasquez, and Cristhian Malave. Some of the mothers who appear in this video made complaints about the situation while their children were still alive.

As 2017 comes to an end, the hospital continues to be contaminated. The public prosecutor's response has been to request the closure of the unit and the transfer of the patients to other hospitals. A court dedicated to the protection of children has called on the public prosecutor to guarantee access to the medical treatments that the patients need. Nevertheless, Katherine Martínez, president of the organization Prepara Familia, denied that the unit had been closed. According to Martínez,

The ward and the dialysis clinic continue to be in operation because this is the only unit left in the country that takes pediatric patients who weigh less than 20 kilos.

The mothers of the victims continue to come together at the wakes and meetings. They also continue protesting, and trying to make this situation visible to international authorities. The video was presented to the Court of Interamerican Human Rights, the largest human rights organization on the continent before the Venezuelan government left it in 2013. Seeing how the prosecutor's instructions were not complied, it is unknown if the government will take an active role in solving this emergency, as it seems priorities are focused on the political disputes that divide the country.