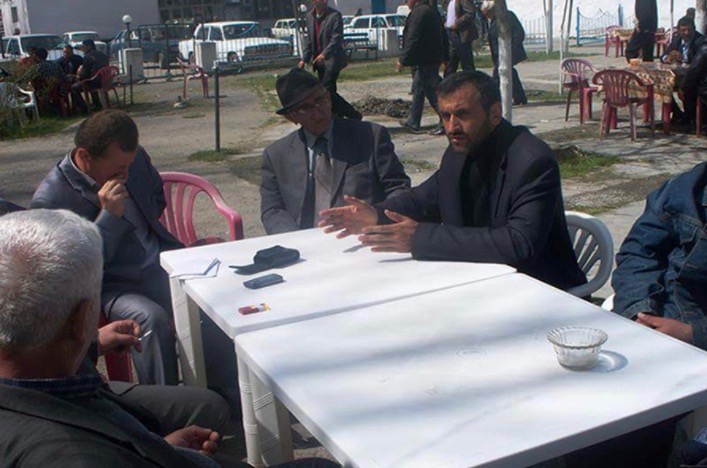 Shanin Javadov [center] is the founder and chairman of the Construction Workers Union in Gabala, Azerbaijan. His union focuses on labor rights advocacy at the grassroots level. (Photo courtesy of Shanin Javadov).

The following is a partner post from EurasiaNet.org written by Durna Safarova. Republished with permission.

Shahin Javadov comes from a long line of rabble rousers.

His great-grandfather assassinated a Russian colonial official in Gabala, a crime for which his ancestor was exiled to Siberia. Only in 1917, after the Bolshevik Revolution, was his family allowed to return to Azerbaijan. Another relative also spent time in Siberia amid the 1937 Soviet repressions for publicly coming to the defense of Nariman Narimanov, the famous Azerbaijani Bolshevik revolutionary and writer.

“So, I was raised with the idea of fighting against injustice,” Javadov said.

Javadov, 52, is the founder and chairman of the Construction Workers Union in Gabala. With about 2,000 members, it's one of the largest non-governmental organizations in Azerbaijan.

Over the past several years, Azerbaijan's government has steadily cracked down on the country's civil society sector, particularly by restricting foreign funding, resulting in the closure of some of the country's most well-known NGOs. In August, the local branch of Transparency International announced it was all but shutting down, spurring soul-searching among the beleaguered NGO community about the failure of internationally funded groups to make meaningful change in Azerbaijan.

Javadov represents a different form of civil society activism: grassroots, volunteer, local. The union focuses on labor rights, advocating for workers whose employers don't pay them. It also lobbies against construction projects that bring in foreign workers, rather than employing locals. And since 2011 he has published the newspaper Qızıl Alma (“Golden Apple” in Azeri), a six-page monthly that covers politics and corruption in local and national government. Javadov and other volunteers hand them out on the streets, teahouses and other public places.

“People still come to me and share their problems, and I try to pass them on to the appropriate authorities, as an intermediary,” Javadov said. “The most important thing is the idea of the solidarity of ordinary people to be able to demand their rights and keep struggling.”

For the most part NGOs have had only a superficial impact in Azerbaijan because they have tended to be organized from the top down, by international donors, rather than built up by ordinary citizens, said Cabir Aliyev, a legal expert who works with a variety of international organizations.

“Shahin Javadov is a rare case,” Aliyev said. “People who have experience in working with donor-organized NGOs learn how to get grants, rather than doing something for the community like Javadov does.”

“Maybe I’m too pessimistic, but what I've seen during my lifetime is that most of the democracy and freedom fighters sold out in the end,” he added. “That’s why ordinary people in Azerbaijan don't trust politically active people.”

The government has justified its crackdown on foreign-funded NGOs by invoking the need to protect Azerbaijan from potential foreign influence and threats.

But the Gabala Construction Workers Union has fared little better, despite getting no funding at all, foreign or local, and being entirely volunteer-run. It, too, has been refused registration.

Javadov also was jailed for five days in 2011 on what he asserts were spurious charges of assault; Javadov believes his real offense was writing an article that attacked Ramiz Mehdiyev, President Ilham Aliyev's longtime senior adviser.

“The government has zero tolerance to any small protest coming from society,” Javadov said. “All the people connected to this government are paranoid and attack every single independent organization, person, initiative that they see as a threat. All the authoritarian regimes are the same: they think that a small compromise can open door to big, unstoppable uprisings.”

Publicly, though, the authorities praise Javadov. “He's very well known and respected in Gabala,” said Damir Bagirov, a member of Gabala's district council. “He is a very active citizen who brings good things to our community.” Gabala is the administrative center of the district with the same name, situated in northern Azerbaijan.

Javadov's civic activism, however, has brought him little material reward. He has been unemployed for two and a half years, and he and his family – including two children, 8 and 10 – have been living on his wife's teacher salary. The family also has a large garden where they grow food for themselves, and he's planning soon to get a few sheep.

He said he hasn't given up hope in helping to create change in Azerbaijan, but he's pessimistic.

”All the ways of struggle that we see in normal democratic countries, are closed in Azerbaijan,” he said. “Elections? No. Rule of law? No. Public opinion? No. Government is not dependent on its people. That’s why using your constitutional rights and doing activism is not working, that's the reality.”

Still, he plans to keep living the life of an activist and publishing Qızıl Alma. “It won’t be possible to find a job anyhow,” he said. “The only thing that I've gained is people's trust,” he said.