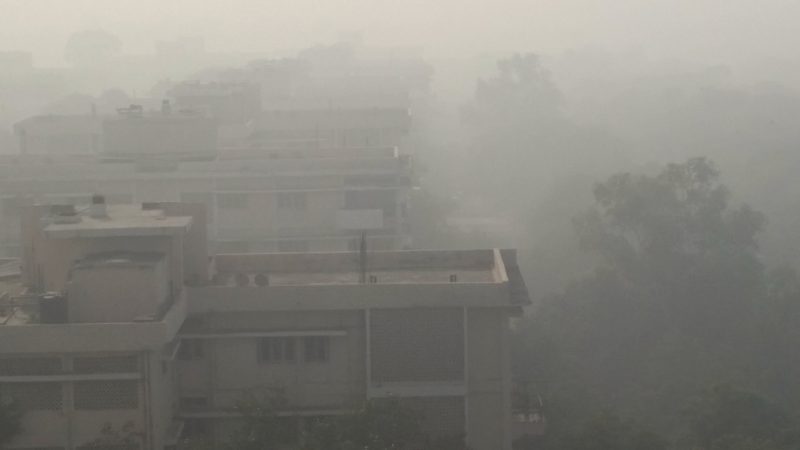 A foggy morning in Dhaula Kuan, Delhi. Image via Flickr by Oatsy40. CC BY 2.0

In response, the government has shut down schools and declared a public health emergency, but criticism is building that authorities aren't doing enough to solve the situation.

There have been increasing instances of smog engulfing many parts of North India just before the winter in recent years. 2017, however, has seen the problem worsen dramatically. The photos below, uploaded by Twitter user @gandabherunda, illustrates how thick the smog was at the end of October.

This is #Delhi as seen from above just few minutes before landing.Wonder how do ppl even breathe,live & survive here everyday! #Smog pic.twitter.com/jQFtq8TeUR

According to the US Embassy air pollution tracker in New Delhi, the levels of PM2.5 (fine particulate matter) reached 703 on November 7, 2017, which is far above 300, the mark when air is deemed as hazardous. The World Health Organization says sustained exposure to high levels of PM 2.5 can cause respiratory diseases, inflammation of the lungs, and even heart problems.

To compare, New Delhi's smog beats Beijing's infamous pollution, according to reports, as the carcinogenic pollutants in the city's air are ten times the reading in the Chinese capital.

‘Delhi has become a gas chamber’

The capital's chief minister Arvind Kejriwal, took to social media, terming the megacity of 20 million people as a “gas chamber” and blamed the pandemic to crop burning in neighboring Indian states:

Delhi has become a gas chamber. Every year this happens during this part of year. We have to find a soln to crop burning in adjoining states

Garbage fires and factory emissions are said to contribute to the problem, too. This augured by low wind speeds and low temperatures make the problem worse and are having a negative impact on residents’ health.

According to the UK newspaper the Guardian, doctors in New Delhi have claimed half their patients suffering from lung cancer are non-smokers. Arvind Kumar, a lung surgeon at the medical facility told the Guardian:

In the last two years, half my lung cancer patients have been non-smokers. I am seeing a peak in people aged in their 40s, even people in their 30s. Our cancers are occurring earlier, more in non-smokers, and more in females.”

The World Health Organization meanwhile has named Delhi the world's most polluted mega-city, beating Cairo, Mumbai, and Kolkata. And according to international medical journal, Lancet, air pollution has claimed as many as 2.5 million Indian people in 2015.

Many citizens have taken to Twitter to express their disdain. The #SmogInDelhi hashtag was trending for a while. Journalist Annie Gowen wrote:

Is “bad weather” some kind of euphemism for “Punjab and Haryana farmers illegally burning acres of paddy stubble and endangering millions across northern India and Lahore, Pakistan”? https://t.co/FUCBV80e7W

Journalist Aman Sharma expressed concern over the perceived lack of action to solve the problem:

Feeling sick to the core due to this smoke & smog though I was not out much. No one doing anything about it. UP, Punjab, Haryana all not bothered. Delhi CM trying but alone can't do much. This too, shall pass – seems everyone's solution to this! ?

Many have complained about Indian Prime Minister Narendra Modi and his government's silence over the smog issue:

So far we have seen zero sense of emergency from Central Govt when it comes to capital’s killer pollution. Emergency meetings should be called & action taken on a war footing. Environment Minister @drharshvardhan should cancel his visit to Germany and come back to India soonest

Headlines even in the international press have been telling for years that India has the worst air quality in the world. The planet’s most polluted cities are concentrated in this country. You’d think prime minister Narendra Modi would at least want to be seen as doing something about this, if not actually doing something. He hasn’t said a word.

Recently, the Supreme Court of India banned burning firecrackers during Diwali festivals in New Delhi because of the pollution they cause. Rafiul Rehman observed on Facebook:

Can't believe it's been close to a month since Diwali and  Delhi is still so polluted! There is smog everywhere. I suddenly feel I am on a different planet. I want to go back to Assam now! Sigh.

The court's ruling was seen as a “communal” one by right-wing groups, who in response distributed firecrackers. One netizen called them out for their behavior:

‘No one is doing anything about it’

Journalist Mayank Austen Soofi, in his photo blog, chronicled the catastrophic Delhi smog. You can check the blog here. A comment under the blog reads:

I have been coughing for over a month, and it is only a week or so back, that I realised that it’s because of the pollution. It’s terrible. It can be brought down, but no one is doing anything about it.

While Anuradha Sengupta urged on Facebook for people who are able to take more personal responsibility in their consumption habits:

Don't understand this – helpless many? Give up the car (or do not buy multiple cars), stop so much consumption, shut down factories. … but most people do not want to make changes to their lifestyle. The people who are lowest down the ladder, who have to live (and work) in the open on the roads – they are suffering the most. And of course, the creatures who are not humans – who are probably dying by the droves without being accounted for.

For some like daily laborers and rickshaw drivers, smog is a daily problem affecting their health:

Even rickshaw drivers wear masks in New Delhi now but this is clearly not enough to protect them against the #airpocalypse pic.twitter.com/JgSfvbPeZj

Other users took a darkly humorous route to describe the smog:

Sums up the early morning ride in delhi #smog pic.twitter.com/upYEqcStmV

Tuberculosis patients aren't safe in Delhi, as this journalist noted:

Patients suffering from lung diseases line up out in open near @aiims_newdelhi OPD – 150 of them choking on noxious air as air quality index deteriorates upto 1000 – #righttobreathe #DelhiSmog @dna @maneeshchhibber pic.twitter.com/be7nGW0v8G

People are attempting to leave Delhi but air ticket prices have skyrocketed:

Smog envelopes Delhi. The cost of an air ticket out to Mumbai jumps to $1,500. pic.twitter.com/aO3zS4bEMs

And Atishi Marlena emphasized that the smog problem goes beyond New Delhi:

For anyone who thinks that smog is just a Delhi problem, pls look at this map of North India! pic.twitter.com/M2K5KHCqGI

The Delhi government has decided to reintroduce the Odd-Even nameplate traffic rule from 8 am to 8 pm in the national capital from November 13-17. Under this rule, private vehicles are allowed to run based on the last number of their license plates. The system was first implemented in Beijing in 2008 just before the summer Olympics and was tried in 2015 and 2016 in Delhi.

According to Shivam VJ, this may not be the answer as “the main cause of pollution is road dust and farm fires, but even within vehicular pollution, it is trucks and two-wheelers.”