Netizen Report: Memes and ‘Obscene’ Messages Are Under Fire in Indonesia 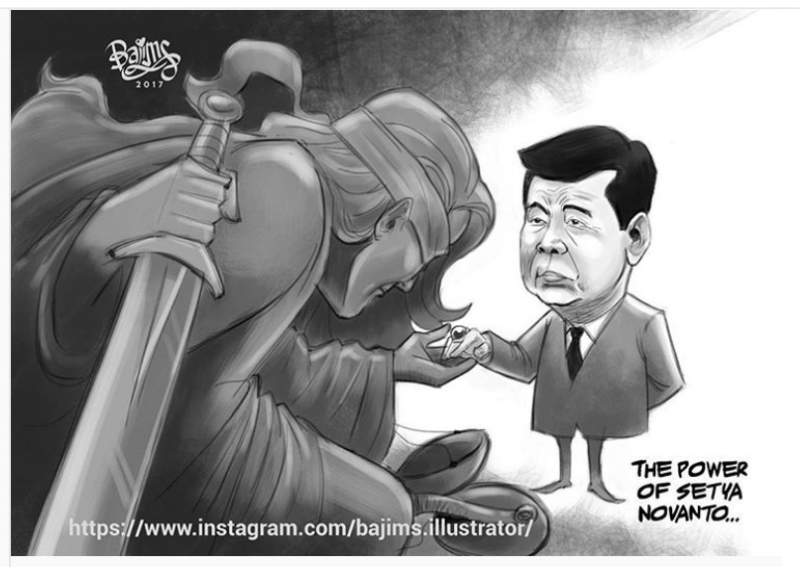 “The Power of Setya Novanto.” Cartoon by Bajims, shared on Instagram.

Indonesia’s Ministry of Communications and Information is seeking to increase controls on “obscene” content online.

The country already takes pains to censor online pornography, dating services, websites with information related to sex and sexuality, and online content that is deemed insulting to Islam.

Director General Semuel Pangerapan announced that officials would summon representatives from Google, Twitter and WhatsApp (owned by Facebook) to pressure these companies to screen their networks for content that they deem to be sexually obscene.

The announcement specifically addressed “lewd” animated GIFs and the prevalence of the typically playful looped animations circulating on WhatsApp. The Ministry threatened to block WhatsApp if the company failed to remove such GIFs within 48 hours. The company, which is owned by Facebook, did not see this as an empty threat — authorities blocked messaging app Telegram in July 2017 due to concerns of terrorist activity on the platform.

It is technically impossible for WhatsApp to identify “lewd” content in specific messages and then remove it — WhatsApp is encrypted, which means that the company cannot screen the content of messages sent between users. Users are free to share with each other anything they find online. But the app also offers fixed packages of ready-to-use GIFs from third-party creators. Shortly after the announcement, popular third-party creator Tenor Inc. had disabled access to these packages. In the eyes of authorities, this seems to have solved the problem, at least for now.

Alongside this effort to tamp down on obscene content online, congressional House Speaker Setya Novanto has unleashed a stream of legal threats against social media users for mocking him online.

A powerful force in Indonesia’s congress, Novanto has evaded corruption allegations on multiple occasions. This is often the subject of online commentary about the House Speaker.

The Indonesian police briefly detained Instagrammer Dyann Kemala Arrizqi for spreading memes that mocked House of Representatives Speaker Setya Novanto. He could face up to six years in jail under Indonesia’s Cyberlaw.

Police warned that nine other individuals will be charged for violating the anti-defamation provision of the Information Technology Law (ITE) for sharing the photo and associated memes on social media.

Law expert Henri Subiakto said that memes are equal to satire and shouldn’t be subject to charges of defamation or spreading a hoax.

According to the Committee to Protect Journalists, photographer and journalist Jesús Medina Ezaine has been missing since November 4. On Twitter, he reported that he began receiving threats directly after publishing an article about one of Venezuela's most violent and overcrowded prisons. The article was posted on Dólar Today, a US-based news site that features critical news coverage of Venezuela’s government and ruling party, alongside black market exchange rate information.

Jailed Algerian blogger Merzoug Touati ended a hunger strike that he began on 13 September in protest of prison conditions. Touati has been in prison since January 2017 on accusations of “exchanging with agents of a foreign power intelligence which could harm the military or diplomatic status of Algeria or its vital economic interests.” The charges were filed after he interviewed an Israeli official and posted that interview on YouTube and his blog. He could risk 20 years in jail. His file has been sent to the Algerian criminal court, and he is currently awaiting a verdict.

A coalition of human rights groups began proceedings this week at the European Court of Human Rights, which has agreed to hear their claims against the UK government concerning unlawful surveillance. The filing focuses on the exchange of information between UK and United States intelligence agencies. The coalition includes Privacy International (UK), the American Civil Liberties Union, Amnesty International, Bytes for All (Pakistan), the Canadian Civil Liberties Association, the Egyptian Initiative for Personal Rights, the Hungarian Civil Liberties Union.

Music keeps on streaming in Iran

The music streaming sites Soundcloud and Spotify are now accessible online again in Iran. However, Spotify’s internal corporate rules still explicitly prohibit Iranians from using its services, for reasons the company has never officially explained. It is unclear why the music platforms are suddenly accessible, GV’s Mahsa Alimardani writes, leading some Iranian netizens to speculate it may have been a mistake, while others see it as a move to loosen restrictions on Internet content.