Amid the Vast Universe of the ‘Valerian’ Movie, Ukraine Gets a Special Shout-Out 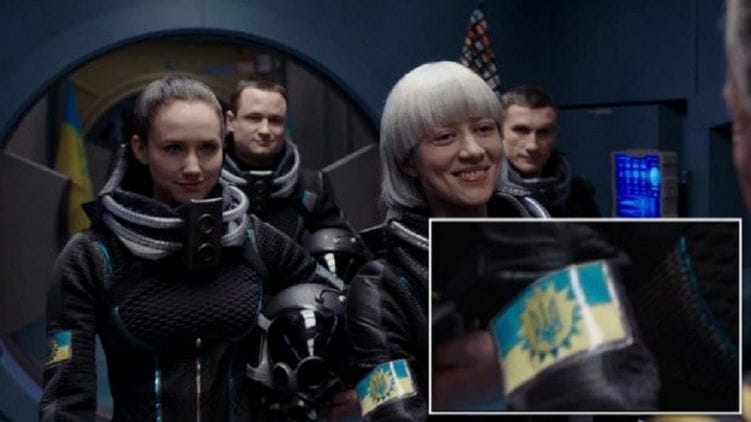 Photoshopped screenshot from the sci-fi film “Valerian and the City of a Thousand Planets” with cosmonauts wearing the Ukrainian flag as shoulder sleeve insignia, shared on social networks.

The presence of the Ukrainian flag on the sleeve of an astronaut in the movie “Valerian and the City of a Thousand Planets” has created a small sensation among Ukrainian social media users.

“Valerian and the City of a Thousand Planets” is the most recent French science fiction film by acclaimed director Luc Besson. It was released in July and possibly still runs in some theaters across the world. It's based on a long-running comics series Valérian (1967-2010) by Pierre Christin and Jean-Claude Mézières.

The opening scenes of the film introduce the history of the fictional universe, including the construction of the giant space station Alpha, which was completed by adding spaceship hulls from Earth and alien cultures onto the International Space Station of today.

Viewers are shown the arrival of a Ukrainian cosmonaut crew lead by a woman with the flag on her sleeve, delighting Ukrainian sci-fi fans and prompting tributes.

For instance, the animation above combines the scene featuring the fictional Ukrainian cosmonaut, who shakes another character's hand, and the 2014 hit song “Podaj Rękę Ukrainie” (literally “Extend your hand to Ukraine,” or “Give Ukraine A Helping Hand”) by the Polish band Taraka. That song was inspired by the Euromaidan protests of 2013 and 2014 against the abuses of the Ukrainian government under President Viktor Yanukovych, and used to raise donations for the families of protesters who were killed by snipers and other violence. It's considered a symbol of Polish-Ukrainian solidarity.

Some of the online discussions also cleared up some misconceptions held by enthusiastic movie fans.

Tweet 1: In Luc Beson's film “Valerian and the City of a Thousand Planets”, the delegation from Earth is represented by Ukraine. Cosmonauts wear our flag on arm patches.
Tweet 2: No. There are delegations from Iran, African countries, and so on. There's no “Earth” delegation. The station itself is Russian.

In fact, this correction is only partly true. The International Space Station is a joint project of the space agencies of the USA (NASA), Russia (Roscosmos), Japan (JAXA), Canada (CSA) and the European Space Agency (ESA).

Besides science fiction, Ukraine indeed runs an actual space program, which started in 1930s. The State Space Agency of Ukraine (SSAU), established in 1992, is one of the descendants of the Soviet space program, and inherited all its installations in the country. Until 2014 it conducted launches from Kazakhstan and Russia. After Russia annexed Crimea, the SSAU sends satellites to space via the multinational Sea Launch‘s floating platform.

While a number of Ukrainians served as Soviet cosmonauts, the first Ukrainian to fly in space under the Ukrainian flag was Leonid K. Kadenyuk on 13 May 1997.