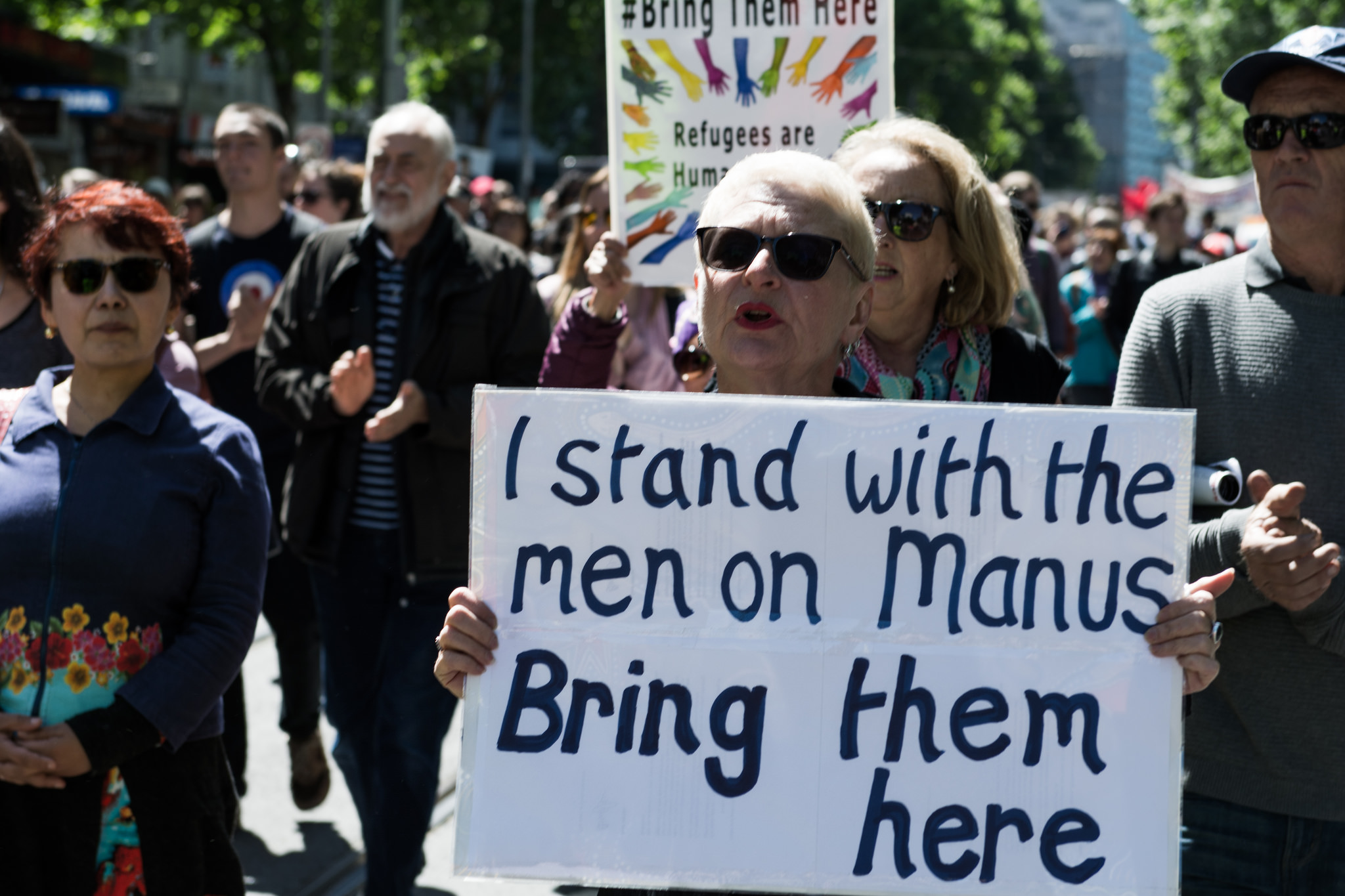 A fully blown humanitarian crisis is unfolding in Papua New Guinea at the recently decommissioned Manus Island Regional Processing Centre, the much-criticised detention facility where for years Australia sent asylum seekers who had arrived to its shores by boat.

The centre was officially shut down at the end of October; in April 2016 the Papua New Guinea Supreme Court had ordered its closure after finding that the detention of asylum seekers there was illegal.

However, 600 asylum seekers have refused to be relocated to other facilities, citing fear of violence and distrust of authorities, and the same court has rejected an application to restore services such as electricity, health, food and water.

There are growing concerns for their safety:

There have been many incidents of violence against detainees including shots being fired into the camp, allegedly by members of the Papua New Guinea military.

‘The refugees have no reason to trust the Australian government’

As explained in earlier Global Voices posts about the issue, Australia's controversial policy deals with asylum seekers who arrive by boat by:

[…] housing them in offshore detention centres on either Nauru or Papua New Guinea's Manus Island, and turning those headed to Australia back. Those who are detained and their asylum claims accepted are only supposed to stay in the centres until they are successfully resettled in a regional country. But the lack of acceptable countries for relocation means many asylum seekers languish in the detention centres for extended periods of time.

The Australian government claims that its goals include “defeating people smuggling and ending deaths at sea.”

So far approximately 50 refugees have been accepted by the United States under a deal negotiated with President Barack Obama in September 2016 and reluctantly accepted by Donald Trump. Processing of the claimants continues slowly. However, Australian Prime Minister Malcolm Turnbull did not accept a renewed offer by New Zealand to take 150, which recently elected Prime Minister Jacinta Ardern reiterated on November 5, 2017.

That decision has compounded the distrust that asylum seekers have for the Australian government, Iranian journalist and detainee Behrouz Boochani, who brought the court action to restore basic services at Manus Island, explained on Facebook. He detailed the reasons for their refusal to leave the centre:

Despite the conditions people are still saying that we won't leave the prison camp until we are offered freedom in a safe place; we committed no crime and are too tired to be in prison any more. Just thinking about relocating from a prison to another prison makes the refugees so tired. […] The refugees have no reason to trust the Australian government and have been treated with lies and disrespect for more than four years.

Boochani has written a series of articles on the crisis for The Guardian and was co-director and writer of the documentary “Chauka Please Tell Us the Time” about life in detention. He used his mobile phone to record scenes from the inside. It has appeared at a number of international film festivals including in London:

Boochani isn't the only asylum seeker who has documented their stay. Omar Jack, a refugee from Darfur, Sudan, has regularly tweeted from the detention centre over the past 12 months:

It appears that he is also part of a video published this week featuring Manus detainees:

Meanwhile, there has been a social media frenzy in Oz. The Twitter hashtags #EvacuateManus and #BringThemHere were just two of several being used. Twitter user Liz used others in her call for global support:

Many people have taken direct action in Australia. A series of rallies were held during the first weekend of November:

Right now Flinders St is shut down. We need to #EvacuateManus and #BringThemHere right now! pic.twitter.com/0AkFaBDeqF

Protesters even took their case to the Flemington Racecourse on iconic Melbourne Cup day. The Whistleblowers, Activists and Citizens Alliance claimed responsibility:

Our climbers r preparing to come down after being up on the crane for over 3.5 hours. #EvacuateManus #manus #sos #justice4refugees #auspol pic.twitter.com/hjT5OOyzLI

Another activist parked a car on the railway line to the racecourse:

“We are desperately concerned that if action is not taken in the next week that we're going to see people die.” #EvacuateManus #LoveMakesAWay https://t.co/GDWwc5VJA2

Not everyone in Australia opposes offshore detention. The Labor opposition have had a similar policy for a number of years. While public opinion is polarised, a fairly silent majority appears to support the current harsh approach.

Comments at the “conservative, independent, patriotic” Morning Mail represent some of the anti-refugee sentiment. Jarrah responded to their Troublemakers at Manus post:

If they really want to go somewhere, send them back from where they came from, we certainly don’t want them here. They can cry and wail as much as they want, I have no sympathy for them, they have had plenty of warning that this day was coming.

‘If you seek asylum from Australia, you will suffer’

Following the Papa New Guinea Supreme Court's refusal to restore power, water and food to the detention centre, Aziz maintained that the Australian government is “sending a message to the world. If you seek asylum from Australia, you will suffer.”

He explained why the detainees had little hope of a good outcome from the court. “Everything in [Papa New Guinea] has been politicised, especially our case.” He stated that they were prepared “to die with dignity.”

Australian Prime Minister Malcolm Turnbull has suggested that the detainees are not actually scared, but are being manipulated by activists and the Greens party. To that, Aziz had a very different view:

I truly believe that each and every of these men … made his own choice to stay.

The full episode can be heard here:

Meanwhile, the latest action has involved another Aussie icon:

Back on Manus, Behrouz Boochani posted this plea on Facebook:

Immigration just put up a notice saying you have only two days to move. If you don't move we'll take you by force. We have been in a peaceful protest for more than 100 days. We have shown peaceful resistance to send a message that we are not going to leave this prison camp for another prison camp and we don't want to live in PNG . We did not come to PNG by our will. Australia exiled us by force to this country and has kept us in this prison camp for nearly five years even though we have committed no crime. It has then abandoned us and it's [sic] obligation under international law to offer safe asylum. What the PNG government has done is try to force people to accept living in PNG, and it still insists on moving us under pressure and force to another prison camp. Using force is completely unacceptable. We have been totally peaceful and even silent in our daily protest. We are not doing anything wrong, we are only resisting peacefully. We are asking again for freedom in a third country.