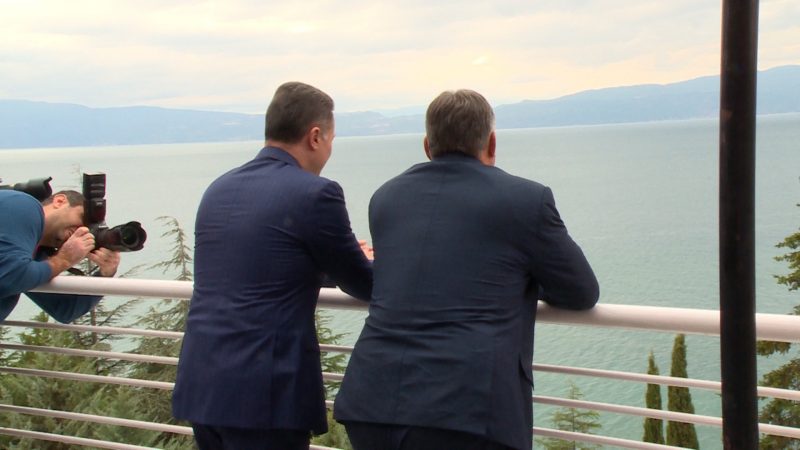 In a grand sweep to re-establish the rule of law in Macedonia after the demise of the populist regime of Nikola Gruevski (the head of right-wing VMRO-DPMNE political party), the country's Special Prosecutors Office (SPO) has initiated 19 cases accusing government officials of various kinds of abuses of power.

These cases have prompted some of the accused and/or convicted felons to attempt to flee to nearby Hungary.

One of the most prominent cases involves former secret policemen Goran Grujovski and Nikola Boshkovski, charged by the SPO with participation in a criminal conspiracy enabling illegal surveillance on the orders of former Prime Minister Gruevski and his cousin Sasho Mijalkov, the former head of the secret police.

Alongside several other colleagues, Grujovski has been convicted of the destruction of evidence by burning documentation. The other cases against him also charge him with the pulverization of state-owned wiretapping IT equipment in the spring of 2015.

Kezarovski got 4.5 years, the unfortunate man caught stealing kebabs got 3 years, and now hear this! The main guy in charge of destruction of evidence for illegal wiretapping of 20,000 citizens just got a “draconian” sentence of 1.5 years in prison.
Macedonian judiciary in a nutshell.

The SPO cases against the two are code-named “Target” and “Fortress.” For over a year, courts stacked by Gruevski's loyalists refused to approve arrest warrants, even though the SPO searched Grujovski's home in 2016 and found evidence that he had engaged in surveillance of the SPO and their witnesses. 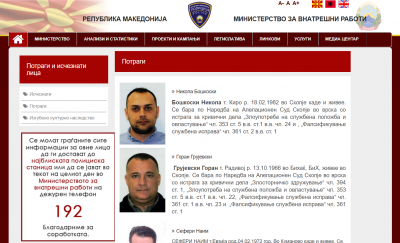 Screenshot of Wanted Persons page from the website of Ministry of Interior of Republic of Macedonia featuring the information on Nikola Boshkoski and Goran Grujovski. Click to enlarge.

The legal wrangling only resulted in the confiscation of the suspects’ passports in early July. By the end of the month, Grujovski and Boshkovski ‘disappeared.’

The Macedonian Ministry of Interior issued an international arrest warrant for Grujovski and Boshkoski at the end of July.

In September, criminal charges were pressed against the president of the Supreme Court, Jovo Vangelovski, whom the authorities hold responsible for enabling the escape.

Attempt to flee to Hungary

On 18 October, Grujovski and Boshkovski were apprehended by Greek authorities at the airport in Thessaloniki while attempting to board WizzAir, the Hungarian low-budget airline, bound for Budapest.

The fugitives were caught using forged Bulgarian passports under the false names of Hristo Atanasov and Nedžbi Hasan. Macedonia netizens commented that these names imply Bulgarian and Albanian (or Turkish) identity, which is curious given the xenophobic and nationalistic rhetoric of their right-wing party promoting Macedonian ethnic purity.

The Greek authorities have postponed the trial of the two arrested fugitives until 1 December, due to the lack of an official Macedonian translator.

Nedžbi and Hristo will remain in detention until they learn to speak Greek! :’)

Macedonian Minister of Interior Oliver Spasovski announced that the whole operation had been a regional effort, involving cooperation between several countries. Macedonian authorities have requested extradition, expected to take place after the December trial.

What made the fugitives think it was a good idea to flee to Hungary? They attempted this foiled feat only after their boss, Gruevski, held a crucial meeting with Hungarian Prime Minister Viktor Orbán in Macedonia on 28 September.

Using a private airplane, Orbán visited Gruevski in Ohrid, Macedonia. He didn't come in his capacity as the prime minister of Hungary, however, but ‘on his own time’ as the president of the ruling right-wing Fidesz party.

Fidesz and VMRO-DPMNE are “sister parties” and both are members of the European People's Party (EPP). Analysts posit Orbán was Gruevski’s “shield” in the European Union (Hungary is an EU member, while Macedonia has been a candidate for membership for years), and speculate his role as Gruevski's mentor in populism tactics.

Orbán spent three hours in Macedonia in private talks with Gruevski. He then publicly expressed his support for him at a press conference organized as part of a local elections campaign. They were joined by the controversial former Prime Minister of Slovenia Janez Janša who has been convicted of corruption.

Orbán urged VMRO-DPMNE party members to remain loyal to their leader even though he is losing power. Orbán defended his counterpart by encouraging loyalists to stick by him “when the sun is shining and when it rains.”

Meanwhile, Gruevski has continually requested the court to return his confiscated passport in order to travel abroad to represent his political party. He submitted an invitation letter from Orbán as proof. However, the Court of Appeals ultimately refused the request on 31 October.

K-Monitor, the leading Hungarian anti-corruption blog, was among the first in the public sphere of that country to address this issue on 1 November, raising the following questions:

The question is, why does the Hungarian PM invite a foreign politician who is under investigation and not allowed to leave his country (according to the press)? Is loyalty to a political ally so much more important than a decision of the Macedonian law enforcement? Another question is if Hungarian authorities knew about the intention of Macedonian ex-secret service people to come to Hungary and whether the government intends to give refuge to ex-leaders trying to escape prosecution?