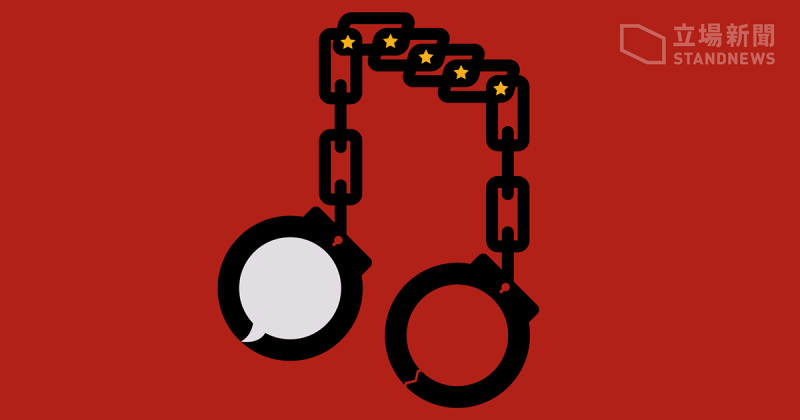 National anthem law set to pass in Hong Kong. Image from the Stand News, non-commercial use.

This post was written by Kris Cheng and originally published on Hong Kong Free Press on November 4, 2017. An edited version is published below as part of a partnership with Global Voices.

A new law in China that criminalizes disrespect of the national anthem is now headed for Hong Kong.

China’s top legislature decided on November 4 to insert the regulation into Annex III of the Basic Law, the de facto constitution of Hong Kong, a special administrative region of the mainland with a high degree of autonomy.

The National Anthem Law was passed in China in September and enacted in October 2017. The law specifies that people who maliciously modify the lyrics or play or sing the national anthem, “March of the Volunteers,” in a distorted or disrespectful way in public, can be detained for up to 15 days, and even be held criminally liable.

Soon after the new law was enacted, the Standing Committee of the National People’s Congress (NPC) amended the country's penal law to include criminal penalties for violating the law. Punishment ranges from removal of political rights and public surveillance to criminal detention and imprisonment of up to three years.

Hong Kong's government has said it will follow up the NPC's decision with local legislation. The government said it will take reference from the existing national flag and emblem law, which also has a maximum penalty of three years in prison.

The new rules come after Hong Kong football fans have been repeatedly booing the Chinese national anthem at matches since 2015 to express their discontent with Beijing for tightening control over Hong Kong.

Hong Kong's local government has been unclear over whether the local version of the law will have retroactive power.

Rita Fan, a member of NPC Standing Committee, suggested that Hong Kong enforce the law soon after it is presented in the legislature to prevent any “disrespectful” acts from happening during the public debate. In fact, Executive Councillor Ronny Tong warned that, legally, the authorities can enforce the law before local legislation is passed:

I advise Hong Kong people not to test the law themselves, because if it’s in Annex III, theoretically speaking – as I’ve said – these acts will already be considered illegal.

Secretary for Constitutional and Mainland Affairs Patrick Nip said the government will consult the legislature and the public when enacting the new law locally.

The government echoed his words in a statement on November 4: “During the legislative process, the [Hong Kong Special Administrative Region] Government will carefully consider the views of the public and members of the Legislative Council.”

Last week, Chairman of the Basic Law Committee Li Fei said Hong Kongers will have to stand up when the anthem plays at the Happy Valley and Sha Tin racecourses. He added that it will become compulsory to play the national anthem in primary and secondary schools.

‘People will follow out of fear, but not out of respect.’

Public opinion is divided. The pro-Beijing sector supports the legislation, believing that the law ensures Chinese people being respected.

However, David Tang from the legal sector wrote on citizen news portal Stand News that respect should be earned:

I like the English expression of “earn someone's respect”.

It is easy to pass a law and prevent the public from insulting the national anthem. People will follow out of fear, but not out of respect. The anthem law can't force people to respect. If you want respect, ask yourself what have you done to earn others’ respect…

Beijing has adopted the policy of improving people's livelihood to earn respect for the past 30 years, but in the case of Hong Kong, it uses the tactic of threats and forces people to respect it. Why? Because Beijing lacks confidence and can only rely on people that it can trust? Or it just gets fed up with Hong Kong's excellent performance under British colonial rule and now glad to see Hong Kong suffer?

Political dissident Lau Shan Ching pointed out the motivation behind the national anthem law is not just about punishing what's considered disrespectful, but also about introducing patriotic education into primary and secondary schools. The law specifies that schools should teach the national anthem and build it into the patriotic education curriculum.

But many argue if schools are to teach the national anthem, they should also teach the biography of Tian Han, the anthem's lyricist. Tian Han was an anti-imperialist and anti-feudalist activist since the May Fourth Movement of 1919. His life has been an embarrassment for the Chinese Communist Party as the first generation revolutionist was tortured to death during the Cultural Revolution.

Opinion leader Ng Chi Sum recounted Tian's biography on citizen media outlet inmediahk.net to show that the most disrespectful acts done to the national anthem was performed by the CCP:

During the Cultural Revolution, Tian Han was labelled as a “reactionary academic authority of the capitalist class”, insulted and tortured. His son had to openly defy him. He was jailed in a hospital room without any family members attending him when he died. Some unofficial record said that he was registered under a pseudonym to prevent the public from learning about his death.

Tian Han was turned over and of course people could not sing the reactionary lyrics of the March of the Volunteers. People changed the lyrics into: “Stand up! Red guards who are loyal to Chairman Mao. Use our blood and flesh to construct the Great Wall of China against Revisionism”. Later, the officially edited lyrics were released: “Uphold Mao Zedong's flag march on, march on, march on”. Only by 1982, the old lyrics of the March of the Volunteers was restored and written into the Constitution as the national anthem.

Tian Han's biography was deleted from the Hong Kong Education Bureau's website in September when the National Anthem Law was passed in Beijing as the national anthem lyrist's life is too sensitive to be included into the patriotic education curriculum.