How Does Your Name Look According to Kazakhstan's New Latin Alphabet? 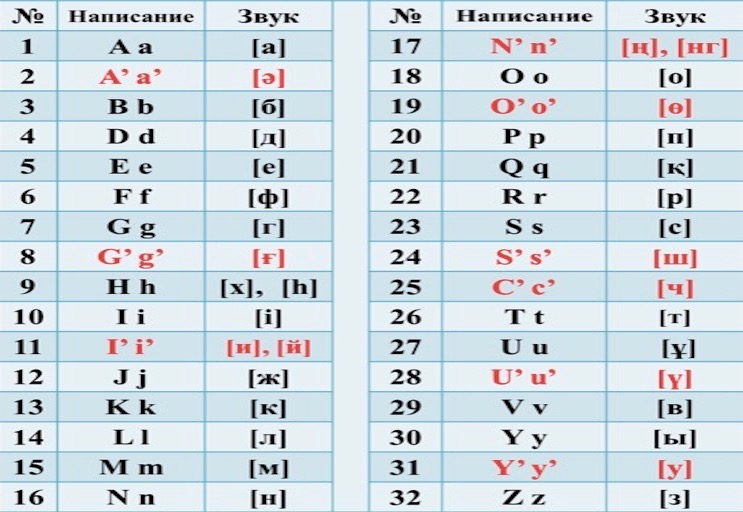 A table showing the new Kazakh alphabet, as published on the presidential website.

A website in Kazakhstan is showing users how their names will look in a new Latin alphabet expected to come into force by 2022. Many have reacted with dismay after finding their names laced with apostrophes.

Nine of the 32 letters in the new alphabet have apostrophes, leaving some that initially supported the switch to Latin from Cyrillic for the Turkic-family Kazakh language regretting the move.

Not that citizens of the authoritarian country were ever consulted: the move is the brainchild of self-styled moderniser President Nursultan Nazarbayev, 77.

After Nazarbayev announced the beginning of preparations for the switch that will see Kazakhstan eventually spelled Qazaqstan in Kazakh, the humble Kazakh carrot became a hotly-discussed topic on social networks.

As an article in the Economist explained, there were reasons for avoiding other, less punctuated versions of the Latin alphabet, such as the one initially floated:

Delighted critics pointed out that the rendering of the Kazakh word for carrot in that alphabet would have been saebiz, which looks a bit like a transliteration of the Russian for “f**k off”.

The Russian government-run outlet Sputnik noted that even in the latest iteration, there are plenty of words that might look rude to people with a knowledge of Russian.

Such quirks are perhaps inevitable, and Cyrillic will still be the alphabet of choice for millions of Russian-speakers across the country. But the issue of apostrophe proliferation in Kazakh remains pertinent.

So Nazarbayev said it’s time to accept latest version of Latin KZ alphabet. Which is a shitty one with apostrophes..https://t.co/uxcVm72OqS

To get an idea of what is bothering Kazakhs, Global Voices ran ourselves through the Latin-Cyrillic-Kazakh Latin alphabet treadmill to see how we looked when we came out the other side.

The methodology is simple. First imagine how your current name would have appeared on a birth certificate if you had been born in Kazakhstan, which was part of the Soviet Union before 1991.

To do this, use a Latin to Cyrillic converter such as the one available on the Lexilogos “multilingual keyboard”. Then use the Cyrillic to Kazakh Latin converter in order to find out how many apostrophes your name collects.

Juan Tadeo, our authority on all things Mexico would be Хуан Тадео in Cyrillic. But in Kazakh Latin his name becomes Hy'an Tadeo, a single apostrophe effort with a somewhat Chinese flavour.

The apostrophes begin to really take over when Global Voices Managing Director Georgia Popplewell, or Djordji'i'a Poppely'ell gets involved. And they go through the roof for our Uganda hand Prudence Nyamishana (Pry'dence Ni'ami's'ana).

Curiously, however, our Global Voices Lingua director Mohamed ElGohary comes through the Alphabet Soup completely unscathed. It seems he is our translations chief for a reason…