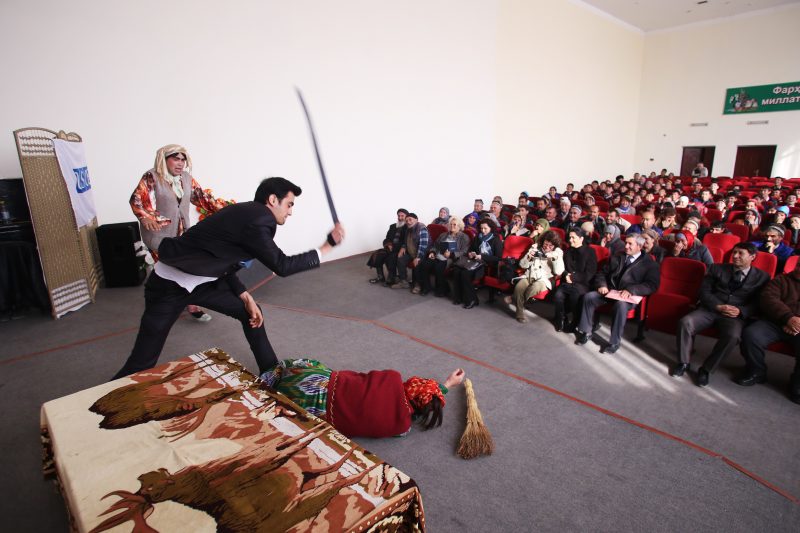 A recent report [2] by the Tajik-language service of Radio Free Europe (RFE/RL) offered a brief summary of some of the many abuses that young women, in the Central Asian country of Tajikistan, face regularly living with the families of their husbands. The comments below the article, meanwhile, demonstrate that despite increases in reporting the problem is not being taken seriously enough.

There is an unwritten law in Tajik society: what goes in the household, stays in the household. That applies overwhelmingly, and even covers cases of the most egregious domestic violence. The abuse young women sometimes suffer, in the families they live in after marriage and the consequences of that abuse, has made international news [3] in recent times. In a number of well-reported cases, suspected abuse has led to tragic ends [4].

With a push from international and local human rights organizations, a law on preventing domestic violence [5] was adopted by the Tajik parliament in December 2012.

It appears to have made a difference. Some 300 brides complained of abuse by their mothers-in-law in the first nine months of 2017 in the southern Khatlon region of the country alone. These women, however, probably only represent the tip of the iceberg.

This article explained why domestic violence is so widespread in Tajikistan, focusing on the economic and financial difficulties faced by many families, which force men to go to Russia to earn money. In the absence of their husbands, wives are forced to live alone with their mothers-in-law, a situation that often leads to conflict.

But many comments under the article were critical, rather than supportive, of the young women that had come forward with claims of abuse regarding their mother-in-laws.

One commenter writing under the name Afsus said:

All these modern girls are spoiled by using mobile phones. And I’m sure that they complained using their mobile phones as well. They perform domestic chores for only one hour, and then they spend the next two hours talking to someone on the phone.

All members of our society behave like that. For example, a dean of our faculty is no better than any mothers-in-law.

Yet another commenter, Shohin, proposed special training courses to teach women how to behave in marriage.

The committee on women's affairs ( which processes complaints from women among other functions) spends money in vain. There should be special courses to prepare young women for getting married…Their mothers should teach them how to behave properly.

The Tajik state must work harder to show that domestic violence is a government priority and that the laws protecting victims work in practice as well as on paper.