A Melbourne lawn bowls club has lost its struggle to save its home of 60 years. Despite a concerted social media campaign, the local Stonnington Council has voted 6 – 3 to replace the Chadstone Bowls Club with a new netball and basketball indoor stadium.

In Lawn Bowls, the aim is to roll bowls closest to a smaller yellow or white ball. It is played on grass or artificial surfaces, both indoors and outdoors. The national body Bowls Australia represents nearly 1900 clubs with over 600,000 participants.

Netball is predominantly played in British Commonwealth nations. Its old name was women's basketball. It is the number one team sport for women and girls in Australia.

A Stonnington Council press release explained some of their reasons:

A new indoor facility in Stonnington is required to meet the needs of netball and basketball, sports that are especially popular among females. Women and girls deserve modern, safe, welcoming and inclusive facilities and this new facility will provide that.

Stonnington covers a large suburban area in Melbourne with over 100,000 people residing there. It has a relatively young population with a median age of 35. The area has become increasingly gentrified in recent decades, with prosperous residents renovating or renewing local housing. It is culturally diverse and has extremes of wealth and income.

Chadstone Bowls Club has 600 members of all ages and is mixed gender. Many are elderly. The club's video, All the Bowling Ladies, had received over 1.3 million views on the Residents Against the Stadium (RATS) Facebook page, with 20,000 reactions and 8,500 comments. Two 82-year-olds and a 72-year-old danced to their adaptation of Beyonce's hit song Single Ladies. The YouTube version had nearly 140,000 views:

Take away oldies from our society & people really miss out on goodness, sweetness, & examples of how younger people should act. I remember when they took it away from St Kilda [Another inner suburb]. I still question the move.

The council offered downsized facilities such as a synthetic green, but the club rejected the offer as a “slow death” because it would remove the space needed to hold fundraising and competition events.

Others have cause for celebration. Facebook group Build Stonnington Stadium (BSS) described the decision as a “great outcome for an inclusive sporting community in Stonnington.” They posted their own Facebook video three months ago featuring school-age netballers. However, it did not achieve the viral impact of the seniors’ performance.

Though the dispute has a ‘young versus old’ quality, both sides have rejected the notion. Build Stonnington Stadium put its case in these terms:

We support equal access to council facilities for all sporting groups. There are 26 ovals & grounds for cricket, football & rugby across the City, but only 2 courts for netball & basketball!

They say that they asked Council not to remove the bowls club but only wished to share. They posted this factsheet in August: 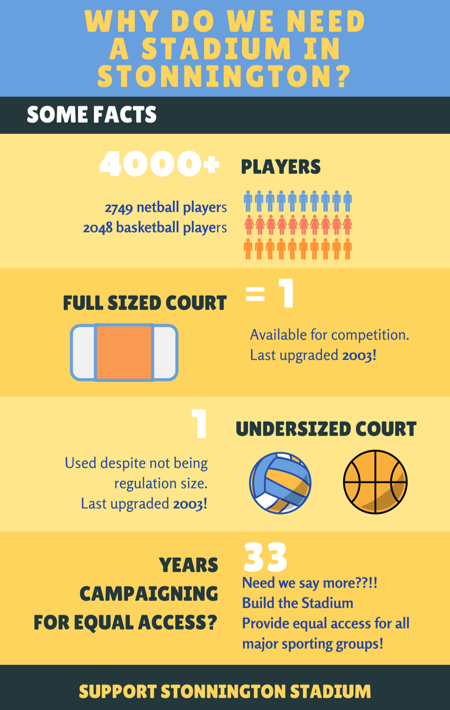 When is council going to do something about the obvious inequality here? There are football ovals and facilities around every corner for (mostly) boys.

Before the council meeting, RATS deplored the division created by the proposal:

Apparently Prahran Netball Association has urged its members to attend tonight's meeting decked out in their netball uniforms. Presumably there will be Chadstone Bowls Club members in attendance also, probably in their bowling uniforms. It's just wrong of Stonnington Council to have created this situation – pitting sport against sport, generation against generation. It's like The Hunger Games – survival of the fittest. Shame Stonnington City Council, shame.

It's a disgrace. Where are the professionals around mental health, aged care, sport for elders?

The fight is apparently not over yet, with suggestions of another bowls video. A different kind of bowler, Victorian cricketer Michael Beer, tweeted:

To the 6 @StonningtonNews councillors who voted for the stadium to go ahead. You've got a fight on your hands! Good Luck #savechaddybowls

Supporters of the Chadstone Bowls Club vowed to continue the campaign:

This battle might be over but the war is just beginning. Residents Against the Stadium will re-group and re-commence our campaign against this ridiculous vote.