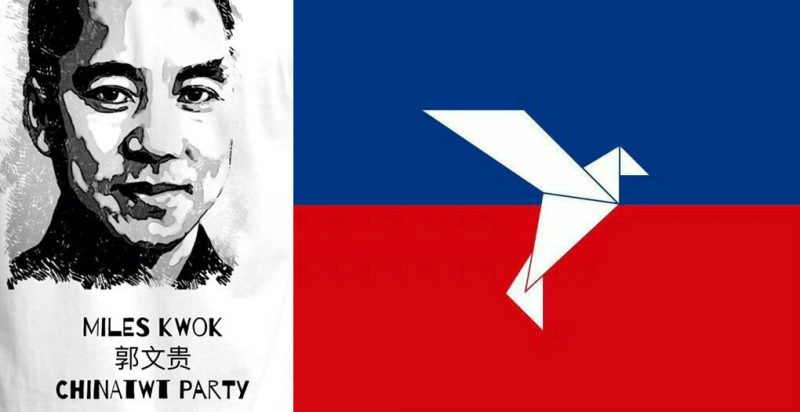 Guo Wengui's supporters organized themselves into Twitter Party with a party t-shirt and a flag (one of the designs).

Allegations of corruption and scandal within the Chinese Communist Party (CCP) have split China's Twitter community into two camps, thanks to corruption allegations made by Chinese billionaire Guo Wengui.

Guo is wanted by anti-graft authorities in Beijing. He left China in 2013 and moved to New York when authorities began investigating his involvement in a series of crimes, involving blackmail, bribes and multiple instances of sexual assault.

In early 2017, the billionaire began publishing allegations of misdeeds by CCP officials, primarily by way of Twitter, where he posts videos of talk shows that he conducts online.

Guo's main target has been Wang Qishan, who leads China's anti-graft campaign. Guo has accused Wang of stealing wealth from the country by turning the HNA Group, a giant corporation with an opaque ownership structure, into a family asset, but Guo has produced no conclusive evidence to support this claim.

Guo has promoted the idea that by exposing acts of corruption, he will bring radical changes to China's political system.

His regular talk shows on Twitter have attracted a large number of fans, and his slogan, “All of this is only the beginning,” become a meme on Chinese social media in May (it was subsequently censored). Many from mainland China have circumvented the “Great Firewall” just to follow him. Currently, his Twitter account has 463,000 followers.

A number of prominent Chinese political dissidents have expressed their support of Guo, regardless of his previous involvement in helping the Chinese secret police to develop overseas spy networks and Beijing's allegations of criminal activity.

Mainstream media outlets have given relatively little coverage to Guo’s allegations, given that he has not provided much hard evidence for his claims and many of them remain unverified. But his supporters believe that many journalists covering mainland Chinese news, even if they are working for foreign media, want to downplay his allegations.

Bao Tong, the former director of the office of political reform of the Central Committee of the CCP in the 1980s, has urged the public to support Guo’s exposés. And Guo Baosheng, a political dissident based in the US, has helped recruit volunteers to distribute and promote Guo’s talks on various social media platforms.

The billionaire's hardcore supporters have organized themselves into what they now refer to as the “China Twitter Party.”

As one of Guo's followers puts it:

When struggling with the CCP, one has to be cunning and wise — borrowing power from one authority to crack down on the other one. Ordinary people can't understand such a tactic. For us, we are all lagging behind and hence can only follow hero Guo's footsteps. Then we will be successful.

Trace the history of the world, have you ever seen anyone who has risked the lives of his family, his billions of wealth to struggle with the world's biggest and evilest state power? He is the one. In the Chinese world where there are so many calling out for hero, one person stands alone. Whoever wants to destroy him, they are my enemy.

On the other side, a number of Chinese activists and opinion leaders have spoken out against Guo, calling him a liar. For example, Zhang Lifan, an independent commentator, pointed out that some of the evidence of so-called corruption presented by Guo has been proven to be fabricated. Hu Ping, another Chinese opinion leader, criticized Guo's fans for turning Guo — who has regularly pledged his loyalty to Chinese President Xi Jinping in his corruption allegations — into a hero. He also suggested that Guo’s allegations were intended to spark conflict at the CCP’s 19th National Congress.

Guo has responded by labeling his critics as spies who are working for a specific faction of the CCP. His supporters have helped to defend him by smearing his opponents.

Many of Guo's followers have acknowledged Guo's involvement in the secret police overseas operation, yet they still insist that Guo's tainted background had empowered him to subvert the system and bring political changes to China.

At the CCP’s 19th National Congress, Wang Qishan was in fact dismissed from his position as head of the anti-graft authority and left the Standing Committee of the CCP Political Bureau. But his departure has not brought any substantial change to China's political system, as Guo has promised. Xi Jinping has further consolidated his power within the party, moving a step toward dictatorship, many have argued.

This raises the question: Why would so many Chinese choose to believe that Guo’s so-called exposés would challenge China's authoritarian system? As Twitter user @idmaiman put it:

When it comes to the case of Guo Wengui, it is worthwhile to reflect upon the phenomena of his fans: Why would a group of anti-CCP people support his position of anti-CCP but not anti-Xi Jinping? How could they only choose a stand without talking about principle and verifying facts? Why do they believe that the outcome can justify the means? Guo vanished [during the 19th Congress], and yet his followers still refuse to wake up. Why is an ordinary liar like Guo Wengui being upheld by so many of his fans as an epic hero?

Teng Biao, a prominent citizen rights lawyer who is now living in the US, has been working since August to demonstrate fallacies in what Guo presents as evidence of corruption. In response, Guo and his followers accused Teng of being a spy for Beijing.

Recently Teng wrote a long piece looking into Guo’s fans by quoting some of the analyses from Twitter:

@buchong ‏said, “How could Guo Wengui attract so many brain-damaged fans on Twitter? The reason is ‘China has suffered from the regime of Zhao [CCP] for too long.'” The CCP has deprived citizens of the rights to election, free speech and religious belief. The collusion of officials, capitalists and the triad [organized crime] has brought corruption to authorities leading to the abusive use of power in city administration and law enforcement, serious income disparity, demoralization and environmental destruction. Resentment and hatred have accumulated for decades and now they find a warrior challenging the CCP, they project their wishful thinking onto Guo and become his followers.

Guo is like an expert hypnotist, he creates strong suggestions leading people into a story plot. His story incites people with its absurdity, exaggeration, sensation and grand plan. For those who question the plot, they are labelled as spies, scum, or targets controlled by the secret police. With praise and echoes coming from some of the so-called activists, public intellectuals, media outlets, more and more people are recruited as Guo’s followers.

Teng explained the phenomenon as being a “cult of personality”:

Guo’s boxer riot online has reflected a syndrome of celebrity worship syndrome. The overt worshiping of a leader, super-man, hero or saint is a rich soil for despotism […] Guo’s fans do not care if the super rich Guo Wengui has accumulated his wealth with criminal acts, they do not care about his morality, personality and political stances; they just feel the urge to worship him […]

Guo Wengui’s Twitter allegations, for better or for worse, may have affected China’s anti-graft tsar Wang Qishan’s political career as Guo and his supporters claimed.

However, another and potentially more adverse effect is that the overseas Chinese Twitter community has been antagonized and thus split. When mainland Chinese netizens climb over the Great Firewall to see what lies beyond their country's censorship, instead of critical dialogue about Chinese politics all they find now is a ruin made up of smears, distasteful comments and offensive quarrels over Guo Wengui.

Even on the other side of the firewall, it is becoming increasingly difficult for Chinese people to find trustworthy news about the political reality in their own country.