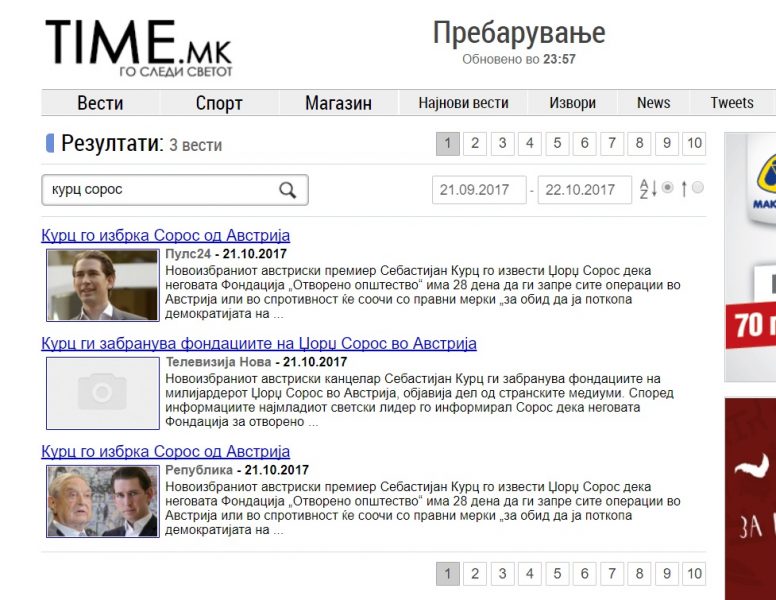 As noted by Media Matters for America, a US-based media watchdog, YourNewsWire often spreads disinformation and has been accused of being a “proxy” for the Russian government:

YourNewsWire was classified as a “proxy” for Russia by the European Union’s East StratCom Task Force, a task force established to fight Russian propaganda. U.S. intelligence official and Kremlin propaganda expert Joel Harding similarly said the site has been “used by the Russians as a proxy site to spread disinformation.” The site is one of the most prominent fake news purveyors to receive a verification check mark from Facebook, granting it a degree of legitimacy that enables the spread of its fake narratives. The verification also contributes to the argument that Facebook is toothless when it comes to combating Russian influence in American politics.

The particular Kurz-Soros item was spread on social media and through other sites claiming to fight “the new world order.” Soros is a controversial figure, and his progressive philanthropy promoting open societies is often demonized in certain right-wing circles and even figures in conspiracy theories about world domination.

This was not the first attempt to connect Kurz and Soros with disinformation, although interestingly, the previous instance tried to present the future Austrian chancellor minister as a pawn of the businessman. As the Guardian newspaper reported on October 15:

The Schmutzkübel (dirt bucket) scandal, which rocked Austrian politics two weeks ago, centred on at least two Facebook sites posting Photoshopped images and video clips that accused Kurz of secretly paving the way for a new wave of immigration from Islamic countries, and of being part of the “dubious political network” of the Hungarian-American financier George Soros.

Disinformation travels through the Macedonian web

Right-wing populist politicians and their supporters in the Balkans celebrated Kurz and the Austrian People’s party's (ÖVP) election victory, pointing to the win as proof that their cause is popular. ÖVP's dominance could also bring tangible benefit in terms of influencing European Union institutions.

However, the disinformation linking their perceived ally in Kurz to their designated arch enemy Soros didn't appear to receive traction in media under their control, with the exception of Macedonia.

In Macedonia, only the media belonging to the propaganda machine of the former ruling party VMRO-DPMNE tried to promote the Kurz-Soros fake news item, incorporating it within their permanent campaign of promoting conspiracy theories centered on Soros.

VMRO-DPMNE had been receiving open diplomatic support by Russia in recent years, and one of its propagandists even recieved a medal from Putin in 2015. Several times during the election campaigns in recent years Kurz had come to Macedonia to express support for them as part of their cooperation within the European People's Party.

A search via the country's leading news aggregator Time.mk, which only covers around a hundred and sixty of most influential sites in Macedonia (out of several thousand), shows that three media outlets echoed the YourNewsWire article, and those outlets are directly owned by party officials or their close cronies. 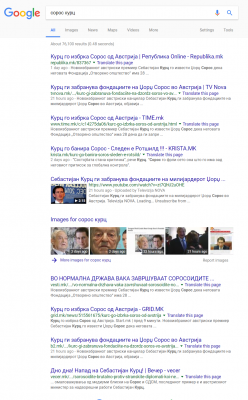 A Google search with the keywords “Soros” and “Kurz” displays a number of articles based on recent fake news. Click to enlarge.

The articles were then picked by smaller sites, which can be placed into two categories. The first are right-wing blogs that push a pro-VMRO-DPMNE stance, which is why on one such site the YourNewsWire article received the headline, “This is how Sorosoids end up in a normal country: New Austrian Chancelor Sebastian Kurz chases Soros out of Austria.” The term “Sorosoids” is a term invented by VMRO-DPMNE propagandists to mark and target dissidents during their rule.

The second involves websites that promote themselves as topical, for instance, as a resource on the Christian religion. Such sites don't advertise themselves as sources of political news, and their staff is most often anonymous.

In one case, the bulk of the site's content consists of advice on how to observe a certain holiday or how to cleanse oneself from the Halloween demons through a pilgrimage tour to a certain monastery organized by a sponsoring tourist agency. However, an author at the website, who signs as “Christ” (Hrist), found it important to misinform their readers that “Kurz bans Soros – Rothschild is next!!!” referring to the famous banking family that also often figures in anti-semitic conspiracy theories.

None of the media outlets which spread the fake news have published a correction or retraction, even though social media users have been reacting to almost all instances of sharing.