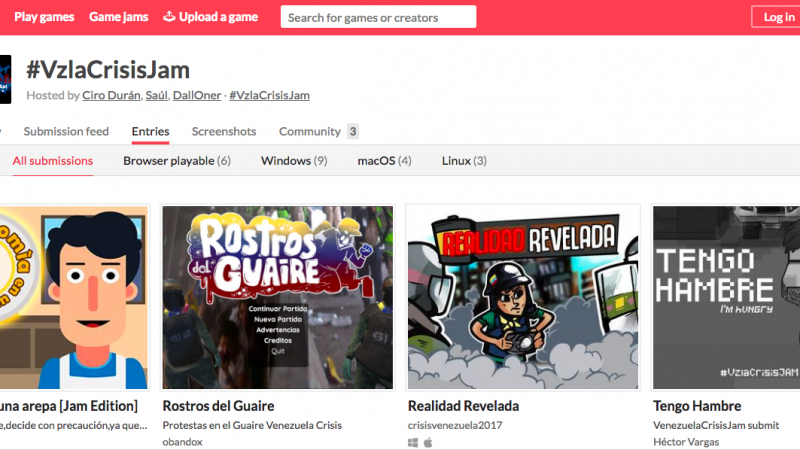 Screenshot of the page hosting the games under #VzlaCrisisJam

Protests against a multi-pronged national crisis in Venezuela have seen citizens pour onto the streets in their thousands, but anti-government sentiment has also found other less typical outlets.

In June and July this year a group of programmers and digital culture enthusiasts gathered to design collaboratively a series of video games focusing on the Venezuelan crisis. Thus was born#VzlaCrisisJam, a “game jam” brainstorming session to create computer games that reflected the nature of the crisis.

The first “game jam” in Venezuela took place in the capital Caracas in 2009 and around 80 online video games have been made through similar events.

The organizers of the politically-themed Crisis Game Jam said:

Any platform is welcome, but I believe that in order to have a better outreach [the platform] should be easy to access: desktop games (either Linux, Windows or Mac), or games for html5. Mobile games wouldn't be bad if [the developers] have the possibility to put it on a ‘store’.

Among the creations of the #VzlaCrisisJam, that can be viewed here, is “Faces of the Guaire” (the Guaire river flows through Caracas). The setting is the day of the April 19 protest that took place on the Francisco Fajardo highway, adjacent to the river.  Protesters were famously forced to jump into the water to escape from tear gas attacks on that day.

Another game  created by the jam was “The Economy of an Arepa”, the typical Venezuelan dish, in which players run a virtual restaurant and need to deal with the rapid soaring prizes of products (due mostly to inflation) and the difficulties of finding them. Two of the games, “Reality Revealed” and “Vzla2017″, a game that recreates the protests and the represion; and finally, “Feria” centers on a character: a soldier that needs to keep the order in front of a group of people asking for food and medicine:

A game prototype where you, as the military, must distribute the basic products among the population. But there are some things you most certainly cannot distribute. Click the military with the mouse and drag back to launch the product. Right click to invert the next product you'll launch with the one after. Click on the queue to send repression.

In total, the jam produced 15 blueprints, of which six can be played online and nine can be downloaded and played on Windows. The goal is to offer different looks inside of a crisis that affects different parts of the population in a wide diversity of ways that are not always understood for the different parts in conflict.

According to one of the promoters of the project:

Right now we're focusing on the outreach of the games and in collaboration. If the comments and the feedback are generally positive we can repeat the experience. I invite people to try at least one of the games, the one that calls their attention the most, and to leave a comment on that page.

This post was originally published on Rafael Uzcátegui‘s blog and has been re-edited by Global Voices with his permission.