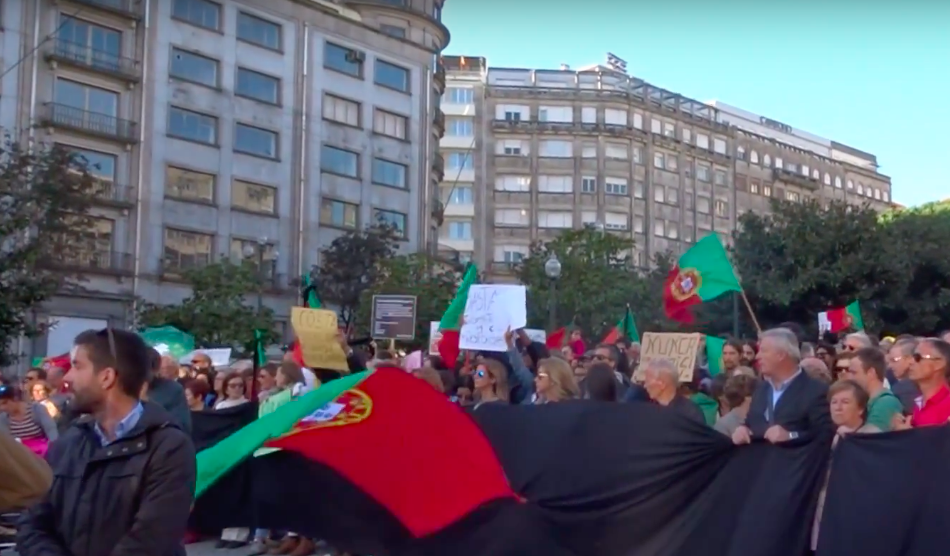 On 21 October, in various major cities in Portugal, hundreds of people came out to demand justice for victims that were killed by massive forest fires that had torn through parts of the country.

Forty-two people died and around 70 were injured in forest fires on 15-16 October, leading the government to declare three days of mourning for the victims and their famillies.

Fires were also reported in the Spanish region of Galicia, where four people died.

An estimated 500 fires have spread through Portugal's northern and central regions, burning around 250,000 hectares of forests and affecting various villages. 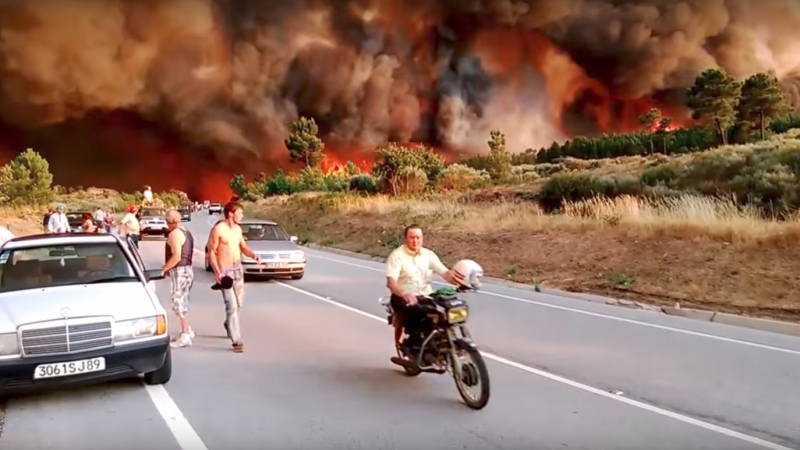 In June, a similar tragedy took place in Pedrógão Grande — a municipality in the center of the country — with fires leaving 64 dead and more than 200 injured.

According to the European Forest Fire Information System, which monitors forested areas via satellite images, around 500,000 hectares of forest have burned in 2017 alone – an area roughly twice the size of the district of Lisbon.

To understand the seriousness of the situation, only 4 districts have no fires. Portugal is literally burning

This is Braga tonight

Various videos were shared online and they gave glimpses of the devastation:

The aims of Saturday’s protests were to demand better state measures to prevent and fight fires.

Questions were raised over the inability of the civil protection service to control the tragedy. João Soveral, of the Confederation of Farmers of Portugal, told the newspaper Público:

After Pedrógão, they closed streets and evacuated villages for everything and nothing. This Sunday, they did not do this anywhere, there were tens of reports of open roads surrounded by fire. In Leiria's forests there could have been a tragedy similar to that of June because they only closed roads very late.

The protesters also called into question the many years that construction permits were given to projects in high fire risk zones. A proposal of stricter forestry reform presented by the government — after large fires in 2003 and 2005 — was questioned by councils, which complained that the rule was a barrier to investment.

“The government introduced a flexibilization of the law that authorized constructions on a case by case basis, depending on whether or not the applicant had means of self-protection – there was an open door for anything to be built”, added João Sorval, in the same report by Público.

The environmental organization, Quercus, brought attention to the large areas of eucalyptus, a tree of highly flammable wood whose growth, ironically, tends to expand after fires of this type.

On top of the growing list of issues, during the 15-16 October fires, citizens who attempted to look for information or tried to contact relatives on the website of Portugal’s Civil Protection, found that the site was offline.

It was a private initiative that assumed the role of sharing information; using the civil protection’s own data, the application Fogos.pt informed people of the location of fires and their status in real time.

The project was created in 2015 by the programmer João Pina to facilitate the work of firefighters, and it became so important during that fateful October weekend that servers could not manage the 400,000 users and the 1.5 million views it received.

Its founder even asked for help:

CAN SOMEBODY HELP ME GET MORE KEYS FROM GOOGLE MAPS JAVASCRIPT API?

In the end, Google contributed to help keep the website running:

There have also been numerous tributes to the firefighters who have been working tirelessly to fight the flames.

The firefighters are our heroes! Enormous pride!

Impossible to remain indifferent to this tragedy. Solidarity with relatives and friends of the victims. Total support for the firefighters risking their lives to help in the best way possible.

Whether the Portuguese government will heed the cries of its people is anyone’s guess, but in the meantime, the country continues to burn.