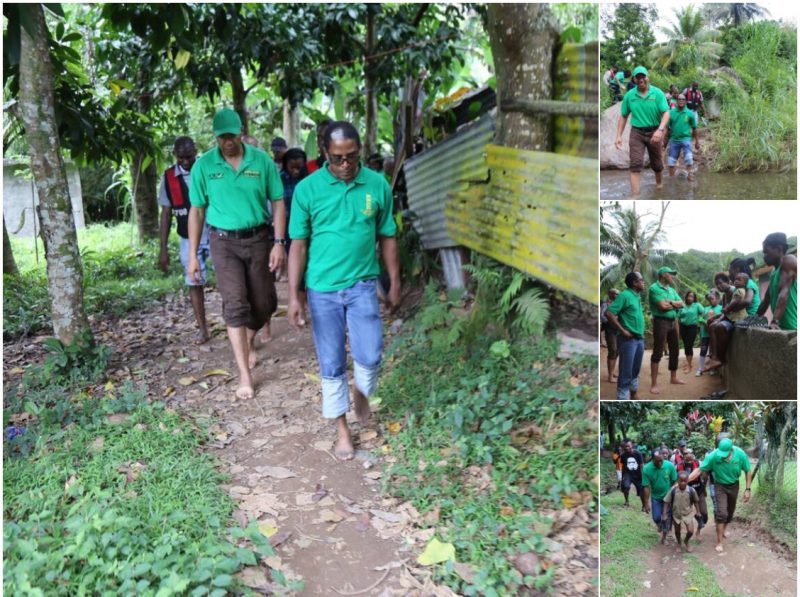 A screengrab of images from a tweet by @DrNormanDunn, showing himself and the Jamaican prime minister walking barefoot in a rural electoral constituency, having crossed a river to get there.

There's no doubt that Jamaicans enjoy a hard-fought political campaign. For the “diehard” party supporter it's a time of passion and excitement (and possibly some small benefits). For the neutral onlooker, a Jamaican political race can often be annoying, perhaps distressing — and sometimes entertaining.

All of the above is true of the current by-election campaign taking place in a rural parish, which has national implications and added significance because of the one-seat majority of the incumbent Jamaica Labour Party in parliament.

Because so much hinges on it, party leaders have played an active role in the campaign, including the social media effort. Photos of Prime Minister Andrew Holness, with his jeans rolled up and bare feet, paddling across a small river, provoked much comment — amusement, praise, and some cynicism too.

We meet the people by the same route they travel to meet us. #DoItForTheLove pic.twitter.com/VqgviwWKJb

His party's candidate followed up with a somewhat cryptic message:

The same paths you walk to Vote, we walk to meet. We cannot fix what we do not face. #ArgumentDunn #DownToEarth #Development pic.twitter.com/ERPww25pgv

The same post on Facebook was shared over 1,800 times and received hundreds of comments, ranging from praise and delight to sarcasm.

The photographs were apparently a response to a video posted by the opposition People's National Party, showing candidate Dr. Shane Alexis arriving in the constituency in a helicopter:

Opposition leader Peter Phillips tweeted the video, which sparked questions from some cynical users about the state of the roads:

Every time @DrShaneAlexis shares his vision for SE St Mary with the residents they are energized & excited #AJamaicaThatWorksForAll pic.twitter.com/EqG0ANV4hL

This is not the first time that Jamaican politicians have symbolically got their feet wet in a river for campaigning purposes, as university lecturer Donna Hope pointed out on Facebook. She shared a photograph of former member of parliament for the constituency, Dr. Winston Green — who passed away suddenly, leaving the seat vacant — in a similar photo-op, quipping:

Who barefoot better? Campaigning for and with the people the Jamaican way.

Several commentators pointed out that the prime minister's post pointed to the lack of infrastructure in rural Jamaica. One regular Twitter user shared:

After October 30 all of you [politicians] will be gone and the people will still have to wade through a river; you will ‘lol’ about the times you went to those places.

Following an on-air discussion about how the publicity stunt was playing on social media, radio presenter Patria-Kay Aarons tweeted:

After you cross the river barefooted and feel the people's pain, your next move better be to give them a bridge!

So, who will win the October 30, 2017 by-election? It has been an eventful campaign, with many twists and turns. The constituency was won by the narrowest of margins — only five votes — in the last elections. With final mass rallies that took place over the weekend, some political pundits feel there may yet again be a close finish — now that the politicians have put their shoes back on.