Screenshots from the “Kod with Snezhana Lupevska Sozen” investigative TV show on the residences of Sushanto Roy in Macedonia, displaying the initial mansion (top left) and current flat. Used with permission.

It might come as a surprise to Indian high society that one of their own has an official address in a modest post-communist building in Macedonia.

Opening the Macedonian Voting Registry had been instrumental in tracking the Skopje address of Sushanto Roy, a son of Indian billionaire Subrata Roy, from an affluent neighborhood in 2016 to an unassuming flat in a working-class neighborhood in 2017.

Sushanto Roy's residence — and whether or not he actually resides there — has brought up questions about Macedonian former ruling party VMRO-DPMNE‘s relationship to the Roy family and how these ties might be linked to government corruption.

It turned out that — contrary to its rhetoric of presenting people from the Middle East as dangerous — during the last decade, quite a few people from that region have received citizenship as “investors” through a fast-track procedure. For instance, Reza Zarrab AKA Rıza Sarraf, an Iranian businessman — actually residing in Turkey — who was arrested in the USA in 2016 on suspicion of money laundering related to breaking the embargo on Iran, was given Macedonian citizenship.

“Kod” also researched the family of Subrata Roy, a controversial Indian billionaire and partner of the former government. They used the data from the voter’s registry — made public ahead of local elections — to find out the current address of Sushanto Roy. Instead of the lavish villa in an elite suburb, his official address is now in a somewhat dilapidated apartment building in a far less glamorous neighborhood at the edge of town.

In the following video of the show (in Macedonian language) we can see the young Roy's first and current official residence.

Investigative reporters visited the flat, located in the drab block nicknamed “the tin building” which was built after the 1964 earthquake. There they encountered the owner, an elderly local man who didn’t want to talk on camera. He explained that members of the Indian billionaire family are indeed formal residents in his flat. The landlord then admitted that his close relatives worked in one of Subrata Roy's companies located in Macedonia and that he was asked to “rent” the flat [presumably as a return favor for the job].

Some citizens living in the Roy's ‘old neighborhood’ mockingly expressed disappointment due to his ‘move,’ and jokingly berated “Kod” manager, Snezhana Lupevska Sozen, for ‘bursting their bubble.’

Sushanto Roy is no longer my neighbor. :( Too bad, we won't be buying bread and milk [in the local store] together any more. :((( Thanks Lupevska.

In 2012, the government of the Republic of Macedonia, promoted an economic program based on attracting foreign direct investments. It introduced the Indian billionaire Subrata Roy as a kind of ‘savior’, bringing hundreds of millions of euros to the country. He was supposed to receive — as a subsidy — part of Galichica National Park to build an enormous casino resort on Ohrid Lake which would include ‘an airport on the water,’ as well as huge tracts of land in Eastern Macedonia to build a farm for 20.000 cows.

At the time, only several independent news portals paid attention to the fact that Subrata Roy was under investigation for massive fraud in his home country. In the meantime, in an effort to create goodwill, Roy's company Sahara, the Macedonian government and the media — under government control — conducted a comprehensive public relations campaign to promote Subrata Roy's company. The PR campaign included organizing an event named Sahara Balkan Peace Festival, which included some Bollywood entertainers, as well as a special appearance by former UK PM Tony Blair.

Mr. Roy also announced that he would finance building a monument to Skopje-born Mother Theresa (1910-1997), whom he met and allegedly befriended in Calcutta. The government celebrated this by erecting a monument — in the form of a marble memorial plaque — to commemorate the announcement of the future monument. The site was one of the few remaining green spaces next to the Skopje main square. 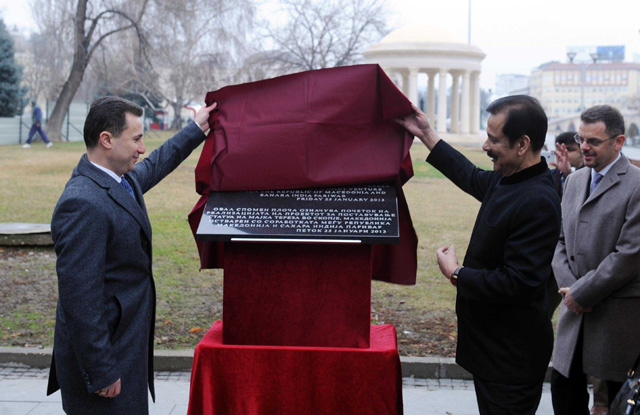 Then Prime Minister Nikola Gruevski and Subrata Roy unveiling a monument to the future monument, Jan 23, 2013. Photo by the Government of Republic of Macedonia.

As in many other countries around the world, Macedonian law allows the government to grant citizenship to persons of particular “scientific, economic, cultural, sportive or other national interest,” (Law on Citizenship) i.e. if they invest over 400.000 euros and employ at least 10 people. In 2014, independent journalists revealed that several members of Subrata Roy’s family, including his spouse Swapna and two sons, Sushanto and Seemanto, had become Macedonian citizens.

Their official address was a rented mansion in an affluent area of Bardovci. In early 2016, while citizens crowd-sourced efforts to weed out ‘phantoms’ from the Voters’ Registry, his name popped up again.

Tweet: Sushanto Roy, Sushanto Roy from Bardovci. #All from the List
Image: Screen shot of the online version of the voting registry displaying his data: name, surname, address and polling station.

In 2014, Indian authorities finally arrested Subrata Roy and put him in prison on charges of fraud and debt. Some of the speculations in Macedonia involved assumptions that the granting of his citizenship was a precaution in case of possible extradition requests from India.

Apparently the young Mr. Roy didn't seem to have even spent much time in Macedonia. In October 2016 the Ministry of Agriculture filed a lawsuit against him for not paying the lease on the land set aside for the promised cow farm. Some social media users used the similarity of the name Sushanto to a local idiom related to lying (“sushi – lazhe” literaly “dries – lies,’ meaning lying so hard that it produces drought) to comment.

Ministry of Agriculture charges Sushanto Roy for a debt for a lease. Why only him? Those who brought him are bigger ‘sushantoes.’

The lawsuit against the young Roy didn't affect his citizen rights; ahead of the general elections that took place that December, Twitter users alerted that this naturalized Macedonian citizen is registered to vote.

Sushanto and Swapna Roy, a son and the spouse of Subrata Roy, are registered with the right to vote in Karposh municipality, Bardovci locality, polling station number 2653/1.

Actually, none of the investments in Macedonia announced by the Roy family materialized. Their company, Sahara, bought a hotel in Ohrid without actually bringing any money into the country. They took a loan from a local bank, owned by one of the top cronies of the ruling party. As the whole enterprise tanked, the bank took ownership of the hotel. To many observers, this confirmed the impression that Roy's role in the whole scam was to serve as a front for laundering the money owned by members of the VMRO-DPMNE-run government.

The VMRO-DPMNE-led government then announced that it would use around 6 million euros of Macedonian taxpayers money to build the new monument to Mother Theresa promised by Roy. It is still in construction in the center of Skopje, and in height, it’s supposed to rival the nearby statue of Alexander the Great. 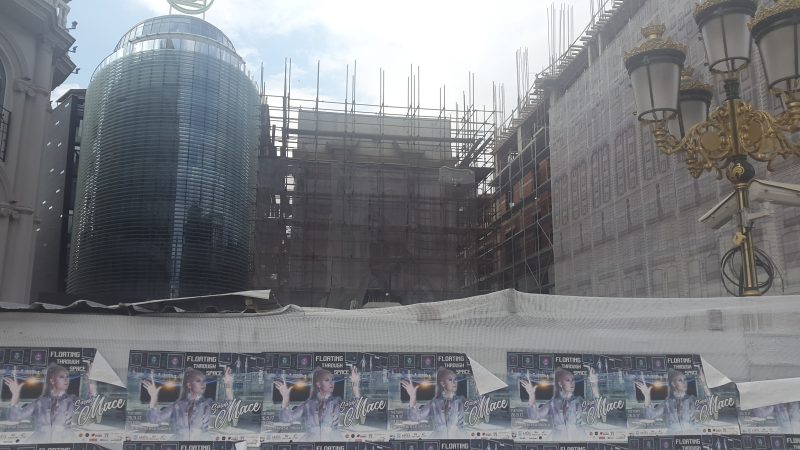 Construction site of the new monument to Mother Theresa (middle) on the main square of Skopje, Macedonia. Photo by GV, CC BY.

Petre Shilegov, the city mayor of Skopje who won the October 15 elections as a representative of former opposition party SDSM, announced that the building of that monument will be discontinued, alongside many other construction projects by the former government, which were part of the VMRO-DPMNE's Skopje 2014 plan.