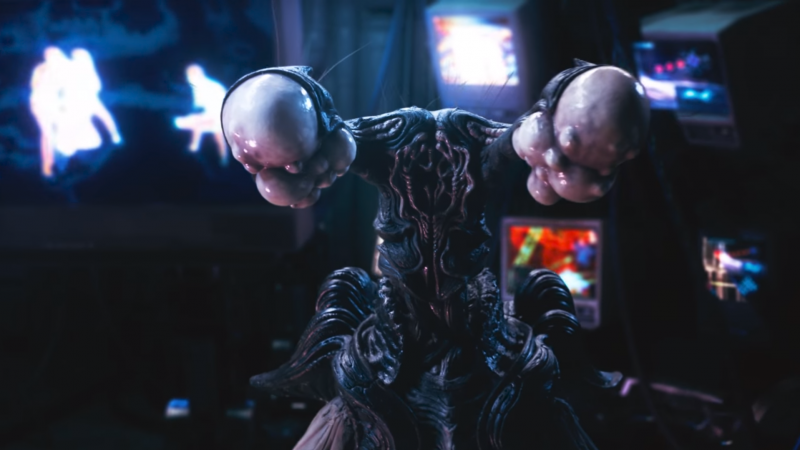 Earlier this week citizens of Kyrgyzstan, a country in Central Asia, discovered they were from outer space. Not only were they in fact aliens, they were alien bad guys. That is at least according to the producers of Brave Storm, an upcoming Japanese science fiction B-movie due to be released in November directed by veteran special effects whiz Okabe Junya, best-known as an alumnus of influential Japanese movie maker Tsuburaya Productions and as producer of cult classic Cat Shit One.

In Brave Storm, humans use psychic powers and giant mechanized suits to battle the Kyrgyz — alien enemies of all life on planet Earth. However, these are no invaders from Central Asia. Instead the film's humanoid Kyrgyz sport grotesque, rubbery snouts, snaggly teeth and, sometimes, even glowing eye pods like lifesize, pugilistic mantis shrimp.

There is little apparent resemblance between the fictional alien enemies of Brave Storm and the people of Kyrgyzstan. So, citizens of the Central Asian republic were understandably dumbfounded to learn they would be featured as bad guys in an upcoming movie in Japan.

Just look at how cool we are!!!

I told my son that there was a film shot in Japan, in which the aliens were called “Kyrgyz”.
I say: “It's funny, right?”
He says: “It's not funny, it's stupid.”
And then he adds: “Maybe we'll shoot a Kyrgyz film, where the Japanese will be aliens?”
Seven-year-olds have such a delicate sense of humour.

Of course this is standard fare Japanese racism. Today is the kind of instance where we should be calling in the Japanese ambassador (to explain the film).

In comments under an article on a local media outlet, a number of netizens recalled the prophecies of a two-time presidential candidate who has repeatedly insisted that the Kyrgyz people have a special role to play in shaping the planet's future.

Others referenced the country's outgoing President Almazbek Atambayev, who has a reputation for starting diplomatic fires.

Excellent! Let our President now say nasty things to the Japanese! We haven't had a conflict with them yet yet!

Meanwhile citizens of next-door Kazakhstan, with whom Kyrgyzstan is going through something of a bad spell, enjoyed a laugh at their neighbours expense.

Incredible Japanese! I don't know about the planet, but we are already at war with the Kyrgyz. Maybe they are just preparing for the real thing. Moreover, they will accuse us of financing (the film)!

Why were the Kyrgyz chosen as the baddies in Brave Storm in the first place?

It turns out that Brave Storm is a remake and a mashup of a couple of failed tokusatsu movie franchises dating back to the early 1970's, Silver Kamen and Super Robot Red Baron. The Kyrgyz have always been the villains in the fictional universe of Silver Kamen since the series premiered in 1971.

A Nitto Kagaku-issue plastic model of “Silver Kamen and Kyrgyz Seijin”, that cost me a ton of money!

Since both Silver Kamen and Super Robot Baron were unpopular with audiences and were quickly canceled, it's tough to determine exactly why the Kyrgyz were chosen as alien villains nearly fifty years ago.

The name choice also puzzled Kawasaki Yoichi, a guide for Kaze Travel, a Japanese company that organizes tours of Central Asia and other destinations, including Kyrgyzstan.

In a blog post, Kawasaki remarks that when the original creators of Silver Kamen came up with the name Kyrgyz as villains, the country was still part of the former Soviet Union. Kawasaki also notes:

Moreover, the first alien to ever appear in the Silver Kamen series was called Tigris Seijin [after the river in contemporary Iraq]. I wonder if the creator of the series was a connoisseur of the Silk Road? There was also a documentary series about the Silk Road that appeared on NHK [the national public broadcaster of Japan] in 1980…]

It would be nice, Kawasaki says in his blog post, if the Kyrgyz aliens of Brave Storm resembled the balbal statues near Burana Tower in Balasagun. Ultimately he had no clue as to where the movie villains’ name came from.

An expert on Japanese movie monsters, commenting as an anonymous source for this article, wondered if there was a simple explanation for the origin of the name.

“In Japanese pronunciation, the ‘kyr’ in ‘Kyrgyz’ sounds a lot like the word ‘kill’ is pronounced,” he said. “It's possible whoever came up with the name wanted something that sounded menacing.”

Moreover, he says, Japanese movie characters, musicians, consumer products and so on often adopt vaguely English-sounding names because of how they sound or feel, with no particularly deep meaning.

Thus, there may be no real reason why “the Kyrgyz” have been singled out in Brave Storm, but unless the film itself proves an unlikely hit, the real Kyrgyz should forget about the slight soon enough. After all, the Internet invaded planet Earth long ago, and human attention spans were the first casualties.