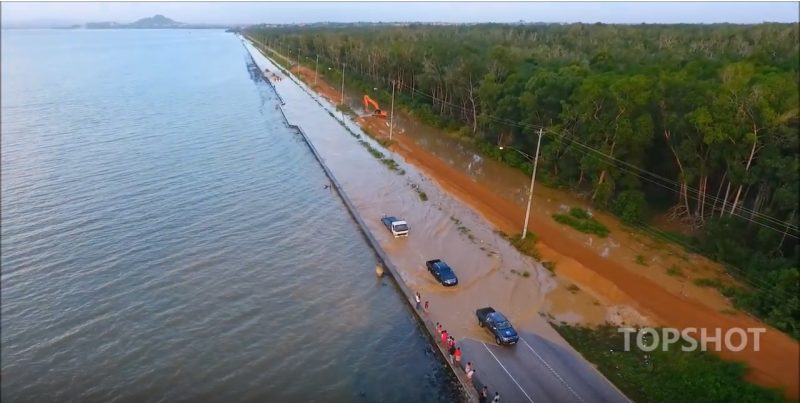 A screenshot of a drone video taken by TOPSHOT, showing the Mosquito Creek area of south Trinidad. This key access road was flooded due to persistent heavy rains which caused the Godineau River to break its banks, as well as high tides from the bordering Gulf of Paria.

The 2017 Atlantic hurricane season [2] has been one of the most active ever — and though Trinidad and Tobago is located outside of the hurricane belt, the twin islands have been experiencing heavy rainfall, which has led to widespread flooding.

On October 18, 2017, the Divali [3] holiday, persistent rain prevented many Hindus from lighting their deyas (lamps) outdoors, but the flooding in many areas of the country was even more worrisome, as was the seeming inability of the relevant authorities to deal with the situation.

The rains continued for days [4]. Central [5] and south Trinidad [6] were some of the hardest hit areas, with some locations reportedly being under five feet of water. There was also damage along the country's north coast [7], leaving people there marooned as well.

Several government ministers managed to get into their affected constituencies; Dr. Lovell Francis, the member of parliament for Moruga/Tableland, to the far south of the country, was one of the most visible [15] on social media. Some roads in his constituency had collapsed [16]; uploading photos from one area, he captioned his post [17], “No words.”

Councillor Candice Allain also put the power of social media to use by posting [18] several Facebook Live videos [19] updating people about road access and relief efforts to the north of the country, where there were quite a few landslides. The relevant regional corporations, all arms of local government, were pro-active [20] in helping residents of flooded areas clean up, and the prime minister visited [21] affected citizens.

In fact, most people [22] rallied [23]. However, Colonel (Retired) Dave Williams, the deputy head of the Office of Disaster Preparedness and Management (ODPM) [24] — the body responsible for coordinating all the necessary relief agencies — missed the mark and incensed citizens when he discounted the gravity of the situation. One journalist live tweeted Williams’ press conference:

Each of the 14 municipalities had flooding. 11 had significant flooding. Let us not act like flooding is a strange phenomenon. It happens

Folks we do flood. All the pushback is on the state. What are we doing as individuals? Do we follow the weather reports?

There was an instant outcry on social media channels. In an attempt to defend the ODPM, Williams attributed the organisation's tardy response to poor communication [28] among emergency agencies and ineffective use of available media channels:

That's what people saw as being absent.
We need to figure out how to get communication out at night. We need to use social media better

Following the uproar, Williams resigned [30] from his post. Or, as Wired868's witty satirist Mr. Live Wire put it [31], the flooding in central and south Trinidad was “catastrophic if you live there or have even the most basic level of human empathy. Or ‘small thing’ if you happened to be the deputy CEO of the Office of Disaster Preparedness Management and wanted to know what a boot in your posterior felt like.” 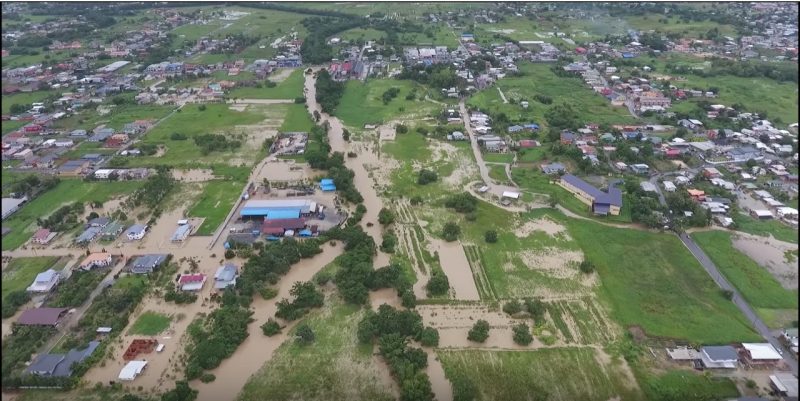 A screenshot of a YouTube drone video showing flooding in the in Penal/Debe area of central Trinidad.

This natural disaster had many takeaways, however, including discussion about contributing factors. The mayor of Chaguanas, one of the low-lying towns in central Trinidad, maintained [32] that illegal structures built on the banks of major rivers were exacerbating to the problem. Residents of the area under his purview suffered great damage to their homes and places of business, and farmers lost crops.

Apparently we have forgotten about the impact that the Pt Fortin Highway had on the Oropuche Lagoon and the wetlands in South.
Coupled with poor urban planning, clogged waterways from littering and incessant heavy rains. […]

She also posed questions [34] about “all the commercial and industrial waste” that clogs certain rivers in central Trinidad.

Other netizens criticised [35] the lack of assistance from the corporate sector.

The irony of the situation was not lost on those who remember the uncharitable online debate [36] about sending relief to other regional territories after hurricanes Irma [37] and Maria [38]:

It raining again. Caricom citizens might have to open their homes to Trinis hit by floods just now.#FloodGate [39]