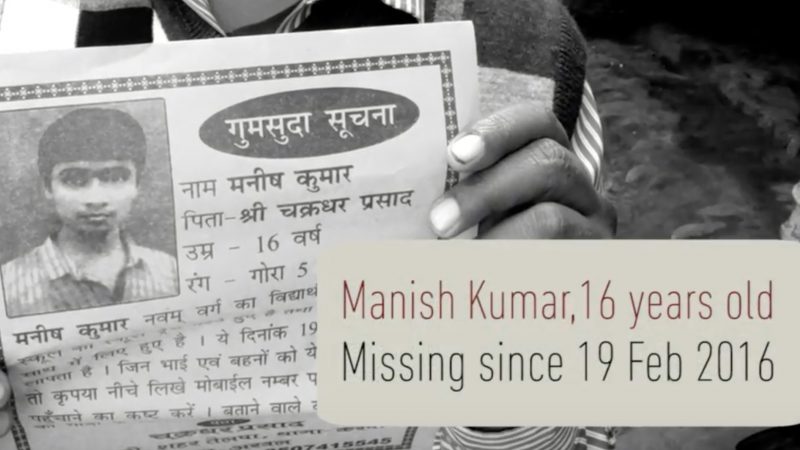 This post was written by Madhura Chakraborty [1] and originally appeared on Video Volunteers, an award-winning international community media organization based in India. An edited version is published below as part of a partnership with Global Voices.

Between 2015 and 2016, six boys aged between 8 and 16 years old went missing in the Karpi block of Arwal district [2] in the Indian state of Bihar [3]. Two of them returned after managing to escape their captors. They have harrowing tales to recount about how they were employed as child slaves.

The boys aren't alone in their experiences. Each year, thousands of children in India fall into the hands of the child traffickers [4] and many of them end up as forced child laborers [5].

Video Volunteers community correspondent S. M. Zafar Iqubal [6] reported on the Arwal case in the video below and spoke to one of the abductees, Manoj Kumar (whose name has been changed to protect his identity). He recalled the ordeal:

These men hit me on my face and I fell unconscious. When I woke up I was in a different place. They told me it was Ludhiana

Manoj was made to chop wood from nine in the morning till six every evening:

There were eight of us. The other boys were from Sultanpur, Aurangabad, Agra, Jharkhand. Twenty men guarded us. They would beat us if we didn’t chop wood and not give us food. There was no payment at all. They killed four boys. And threw them in the river nearby.

According to the Global Slavery Index [7], India is home to 40% of the world’s 45.8 million modern-day slaves. Slavery [8] is a broad term which encompasses all forms of forced labor, including sexual exploitation.

But the only kind of trafficking and exploitative labor, consistently highlighted by the media and international actors, remains the sexual exploitation of girls and women in brothels [9]. Teenage boys like Manoj, kidnapped and brutalized and forced to work in inhuman conditions, are largely ignored.

A 2013 investigative report on the trafficking racket [10] supplying young boys as slave labor to the sugarcane farms of northern India detailed the depth of police apathy, even when faced with hard evidence of systematic exploitation. The attitude that the harried parents waiting for their children in Arwal encounter with authorities is no different.

Mohammad Ansari, whose 15-year-old brother went missing in 2015, said the police initially dismissed their complaint:“They told us he must have run away.”

Bittu Kumar was only 8 when he went missing in August 2016. Fekan Yadav, his father, recalled bitterly:

We had to organize a roadblock and demonstrate in front of the Superintendent of Police, and only then did the police come to investigate. It’s only when we go to the administration that anything works. If we don’t go, they will not do anything.

Video Volunteers community correspondent Zafar Iqubal, who has been helping the families approach authorities, doesn’t hold out much hope for a pro-active stance on the part of the administration. He explained:

Zafar Iqubal went to get updates about the case from the inspector in charge recently:

He kept asserting that the police don't have any information regarding the whereabouts of these boys, and so, can’t rescue them.

This is echoed in the testimony of Marmun Khatun, whose son Arshad is missing:

They come and ask us for information, telling us that they can only do something if we find out more details.

The inaction of police appears to violate existing legal provisions. According to a 2013 judgment by the Supreme Court [11], all missing minors are presumed to be kidnapped or trafficked, until proven otherwise.

The families of the missing boys in Arwal, however, have repeatedly been told that the boys have probably gone to work somewhere and will come back on their own. This logic has been used by the police to delay registering First Information Reports (FIRs [12]).

In a Standard Operating Procedure [13] for Cases of Missing Children, the Ministry of Women and Child Development further lays down the provision that if the child has not been rescued within four months, the case will be investigated by the district Anti-Human Trafficking Unit (AHTU). This has also not happened.

The results are here to see: 180 children go missing every day in India [14] and two out of three have not been located in the three years following their disappearance.

The two teenage boys who have returned home have done so completely on their own, managing to evade and escape their traffickers at great risk to their lives. They were lucky. But what about the four other youngsters still missing? Will the criminal justice system, meant to protect them, finally step into action? Only time will tell.

Meanwhile, there is only the interminable, excruciating wait for the families of Manish Kumar (16), Arshad Ansari (14), Bittu Kumar (8) and Sonu Ansari (17).