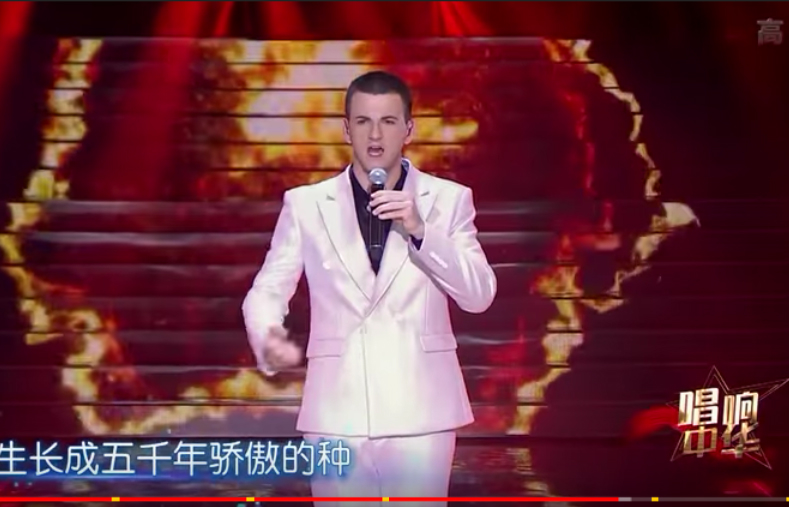 An American named Dylan Austin Walker, who is a Communist Party USA member and is currently studying at Beijing Language and Culture University, has recently become a hot topic on Chinese social media.

First, the 21-year-old turned heads with his TV performance during the National Day of the People's Republic of China on October 1. A special program called “Sing It Out Loud for China,” organized on SMG Shanghai TV, invited singers from different countries to sing songs praising China in Putonghua (Mandarin). After the performance, each singer were asked to say something positive about China.

Below is Walker’s performance of “China Dream and My Dream,” a popular song released in 2013 that echos Chinese President Xi Jinping’s dream of a great revitalization of the nation:

Wu Danran [Dylan Walker’s Chinese name] has studied Chinese since first grade, and is now on the stage of #SingItOutLoudForChina. He is going to perform “China Dream, My Dream.” He has been in China for almost two years and he has found life in China too convenient. Not only for transportation, he doesn’t have to bring his wallet because of the existence of [online payment options] Alipay and WeChat!

In the interview, he says he first visited China in 2012, where he became inspired by former Chinese Communist Party leader Mao Zedong’s thinking:

I think communism is the most advanced and the ideal social and political system. We just want to make sure everyone can get access to basic welfare and rights.[…] When I came to China for the first time, I bought versions of the “Quotations from Chairman Mao” in both English and Chinese. I read it almost everyday after I going back to the U.S. I kept it with me during class and I read it when I have time after classes. If I hadn’t learn from the quotations, I wouldn’t have joined the Communist Party USA. So Chairman Mao and the Communist Party of China have a special place in my heart.

Unlike prevailing opinions in his home country, his view of the Communist Party of China (CPC) is glowing:

The CPC now is admirable for me. Especially since President Xi Jinping took office, the corruption crackdown has swept nationwide.[…] Every time when I browse the website of the People’s Daily and Global Times, I can see such reports almost every day as corrupted officials get arrested. […] What’s terrible is that a communist might have doubts towards communism and socialism, and then loses this belief and faith. Just like what President Xi said before, some communist members lack ‘calcium’ that is lack of belief in communism and Marxism.

Walker has been studying in Beijing for almost two years. He has a Chinese girlfriend and has been interviewed by many official media outlets. This is not the first time he appeared on Chinese TV program.

On mainland Chinese social media, you can’t find any negative comments about Walker’s performance and interview. However, Twitter, which is currently blocked in China, is a different story.

Users who have managed to climb the “Great Firewall” to access the US-based social network have called Walker a “foreign 50 center,” a reference to the “50 cent army” of internet commentators paid by the Chinese government to manipulate public opinion.

Below is a sample of responses found under a tweet by a parody account of the Chinese Communist Youth League Central Committee:

Smart foreign 50 center won’t go to North Korea. In China, they stand to benefit and are safe.

LOL. Hello foreign 50 center, what has gone wrong with your mom? In China, some workers in China can’t afford an apartment even if they kept working for 100 years. And the global internet suffers from a timeout problem [because of the “Great Firewall” censorship measures]. Stupid dog.

Get a Chinese wife, cheerleading for China. If he gets himself a CCP representative title, he will become the next [Chinese business magnate] Jack Ma.

A foreign 50 center is more deceptive. For those who only watch [state broadcaster] CCTV news, they would feel lucky that they are under CCP’s rule.

Nothing strange. Some white Americans are living in North Korea. Some even joined ISIS.

Others, however, thought that Walker was genuine in his beliefs and criticized those who called him a 50 center. But they have their own theories about his political performance:

Please don’t be so mean. This guy is probably a China fan and there is nothing wrong with that. He likes China but he doesn’t know what the problem is that China is facing. He has been fooled. Probably he doesn’t even need to pay his school fees.

I don’t think he is a China fan. He has just been poisoned by communism. In the US, there is a communist party and its members firmly believe in communism. Because capitalism is far from perfect they are looking for utopia. It is like a drug addict finding escape from reality.

Indeed, Walker is very frustrated about US politics. In another interview in March, he criticized mainstream media and the Democratic Party for marginalizing candidate Bernie Sanders during the American presidential election in 2016.

But he doesn't appear to be applying the same critical attitude to China. On his Weibo account, most of what he publishes are reposts of content from official media outlets or Chinese Communist Party and government organizations. As one person on Twitter observed:

What he said is correct from his viewpoint because he is not a Chinese person.