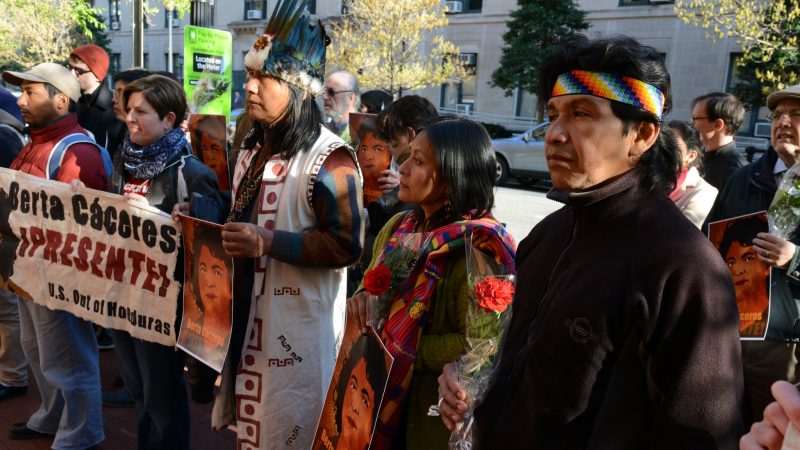 In Honduras, a recently approved law dictating that protestors can no longer organize demonstrations without the possibility of being considered criminals, or even “terrorists“, has been added to the risks that environmental activists face in the country.

According to the criminal code law, organizers of demonstrations could face 20 years in prison, and regular protestors 15 years, regardless of the reason for the protest.

The law is a new burden for citizens of the Central American country where demonstrators face regular and sometimes lethal violence simply for defending their rights and their lands. According to the NGO Global Witness, more than 120 activists have been murdered by “state forces, security guards or hired assassins” in the last eight years while countless others have been incarcerated.

Activism has been stigmatized in Honduras since 1963 when the country went under a two-decade-long military rule. The constitutional crisis of 2009 only served to exacerbate oppression.

A new law in #Honduras further threatens activists in what's already the deadliest country on Earth for defenders: https://t.co/ihvUDi74b1 pic.twitter.com/AkDB0JJOma

The rich enmeshed with the powerful

Honduran activists’ rights and sometimes, lives, are crushed due to the intersection of powerful political and business interests, according to Global Witness. The most flagrant examples of state repression target those defending their land and the valuable natural resources underneath it.

Protesters say the government’s pro-business policies have led to projects that cause environmental damage for communities living in rural areas. For this reason, communities fight back.

Big investments, like hydroelectric dams and luxury tourism resorts, have posed a particular threat to the livelihoods of indigenous peoples, who are generally not consulted prior to the start of these projects.

Some of the activists who have offered vocal opposition to such projects have paid the ultimate price for doing so. One prominent example is Berta Cáceres, who was assassinated after years of campaigning against the construction of a hydroelectric dam being built on her community’s territory.

Cáceres argued the dam posed a threat to a vital and sacred water source.

Unsurprisingly, there has been little progress in uncovering Cáceres’ death. According to an investigation by The Guardian, Cáceres’ name was on a military hit list along with the names of several other leading environmental activists. Below, the tweet from COPINH, the association founded by Cáceres, shows the viral hashtags ‘#19monthswithoutjustice, #justiceforberta and #desagetout’. DESA is an acronym for an energy company, “Desarrollos Energéticos S.A.”.

At least seven more activists have been killed since Cáceres’ murder and many others are at risk, including social and student protestors. University protests, which first emerged in opposition to a spike in tuition fees over a year ago, have been dispersed by police using armoured vehicles and tear gas in recent times.

So far this year 30 students have been incarcerated for damaging the property of the Autonomous National University of Honduras (UNAH) while others have committed to hunger strikes.

On June 23, 2017, the father of a student who had been jailed was murdered shortly after criticizing state-led repression. Less than three weeks later, Luis Joel Rivera Perdomo, a leader of the student movement at UNAH, was assassinated. Perdomo's family had to leave their home because of continued threats.

Nip it in the bud?

On September 19, 2017, Honduras’ national congress voted for a further curb on demonstrators’ rights, ostensibly in the name of public safety. For many, the new law equating peaceful protesting with a crime is the political class's effort to nip activism in the bud and annul the right to freedom of association.

In an interview with Upside Down World, Eugenio Sosa, author of “Dinámica de la protesta social en Honduras” (The Dynamics of Protest in Honduras), explained that citizens have been particularly active in speaking out on social and environmental issues since the 2009 coup. The new law represents a cynical bid to crush civil society once and for all:

This [law] seeks to anticipate – to suffocate at times and above all anticipate – possible popular overflows … in the face of a general public that is very jaded by impunity, corruption, and very severe social inequality.

Ever since the law passed, Hondurans on social media have been contrasting the relative privileges enjoyed by the graft-ridden elite with the severe risks endured by protesters:

Justice in Honduras: They steal [money from] the IHSS [the Honduran Institute of Social Security] and other institutions: 6 to 8 years in jail. Protests against that theft: 20 years. In the image: “You steal 7 billion from the Social Security, you get 6 to 7 years in jail, but if you demonstrate against the theft, you get 20 years.”

In 2009, Honduras lived through a constitutional crisis which ended in what many governments and human-rights organizations believe was a military coup. The Honduran Army had followed orders from the country’s Supreme Court to oust President Manuel Zelaya as he aspired to convene a constituent assembly to rewrite the constitution. Thereafter, the de facto government headed by Roberto Micheletti implemented curfews and, according to Reuters, a “media blackout”, as many media outlets were censored. Today’s government, led by Juan Orlando Hernández, is often at the forefront of scandals involving graft and embezzlement of public funds.