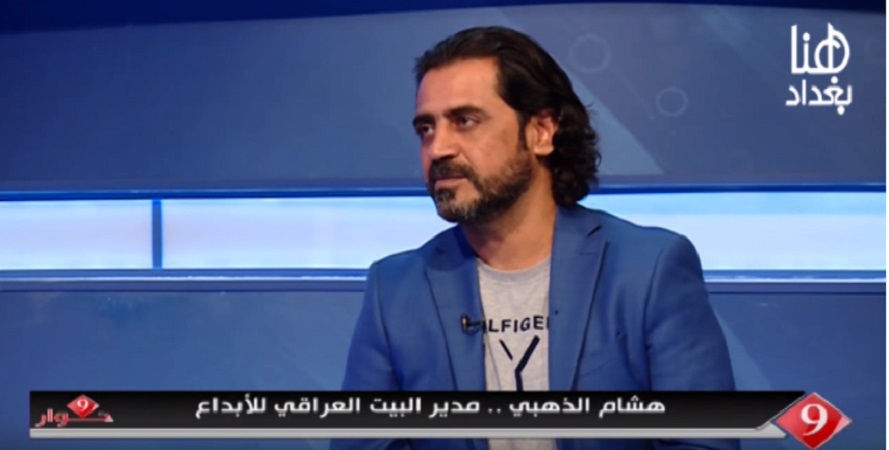 Screenshot of an interview with Hisham al-Dhahabi, published on YouTube as ‘Hiwar al Taseaa with Ali al-Muhana’ on October 11, 2017 by the Hona Baghdad channel.

A recent social media campaign gaining popularity in Iraq is urging the government to gift a piece of land to the Iraqi Safe House for Creativity, a private orphanage housing some of Iraq's most vulnerable children.

In an interview (starting around minute 32) with Hona Baghdad, an Arabic language news channel, Hisham al-Dhahabi, the director and founder of the Iraqi Safe House for Creativity, revealed an offer made by the Municipality of Baghdad to gift a tract of land to his organization. The deal has been stalled, however, in the office of Prime Minister Haidar al-Abadi pending his approval.

Al-Dhahabi called on the prime minister to sign off on the deal so that the organization may begin the process of expanding its facilities.

Al-Dhahabi, a trained psychologist, is well known in Iraq for his humanitarian work with orphaned, neglected, and homeless children. He began working with vulnerable children in 2004 for the Baghdad branch of a Kurdish organization called Protecting the Children of Kurdistan.

In 2006, a member of the organization was killed during heightened sectarian violence leading the office branch to close. Instead of handing the children over to a dysfunctional state-run orphanage system, he took on the responsibility of caring for them and founded the Iraqi Safe House for Creativity.

The organization not only houses disadvantaged children, but treats them using arts-based therapy as a way to cope with the trauma they have faced. Children are offered classes in art and music to develop their creative talents, in addition to more practical skills such as barbering, sewing, and cooking. The organization currently houses 45 children ranging in age from 4 to 20 years old.

Al-Dhahabi's efforts to support orphaned children has never been easy. A 2011 documentary titled “In My Mother's Arms” highlighted the difficulties he faced funding this safe haven. He receives little government assistance, mostly relying on private donations.

Earlier in 2017, al-Dhahabi was recognized in Dubai at the Arab Hope Makers Ceremony, an event honoring the Arab world's most inspirational leaders who have dedicated their lives to helping the less fortunate and bettering their communities. He was among five people awarded a prize of 1 million UAE dirhams (about 272,000 US dollars) to continue their philanthropic efforts. Al-Dhahabi plans to use the prize money to finance construction of the organization's new facilities.

You can watch a video created by the Arab Hope Makers initiative highlighting his work below:

Iraqis are using the hashtag انطونا_قطعة_ارض#, which translates to “give us a piece of land” to voice their support for al-Dhahabi and his organization.

In my name and in the name of all Iraqis who have a conscience we ask for a piece of land for Hisham al-Dhahabi.

Hisham al-Dhahabi isn't asking for the impossible, he is requesting a basic right for Iraqi children.

The government should help him build a complete foundation because these children are the future of Iraq and they deserve to feel safe.