Why Is the US Celebrating an Iranian Socialist Wrestler? 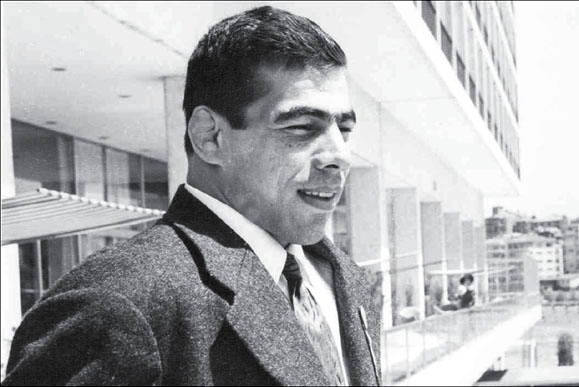 Gholamreza Takhti in Tehran. Image from Namnak.com and distributed with the intention to share.

Listen in on a group of young Iranians talking about sports and you are most likely to hear about football. The global fever over ‘the Beautiful Game’ has for decades captured the Middle Eastern country and Lionel Messi is just about the biggest global celebrity here (if slightly hated for a goal he scored against Iran in the last World Cup). But Football has always had a serious rival in Iran: wrestling.

If in football, Iran remains something of a middle power (and that in the biased estimation of this writer), in wrestling, the country is objectively among the best in the world. Of the 69 medals that Iranian athletes have ever scored in Olympics, 43 were gained in wrestling. Three of those medals were won by Gholamreza Takhti, probably Iran’s best-loved athlete of all time.

As the fiftieth anniversary of Takhti’s death (On January 7, 1968) approaches, plans are already underway to commemorate him. He was recently honored by a bust installed in United States Sports Academy, a regional institution in Daphne, Alabama. At a time when the US government has adopted an ever more bellicose attitude toward Iran, events like this remind us of important people-to-people contact between Iranians and Americans.

The news of Takhti being honored in the US was widely shared by Iranians. This foreign recognition generates much pride as Takhti's historical significance goes beyond athletics. He is something of a modern-day saint, a mythical figure about whose life many fantastical stories are told, few of which are based on fact. But the stories do reflect the main trends of Takhti’s life and how he, inside and outside the ring, encapsulated values that many in Iran today feel nostalgia for.

Takhti was born in 1930 in a working-class district of southern Tehran. His parents were also born in the capital, although they descended from Turkic peoples of the old city of Hamedan. He competed in the Helsinki 1952 Olympics, and became one of the first Iranian athletes to win a medal in the global games. Four years later, during the 1956 Melbourne games, he would become the very first Iranian to win an Olympic gold together with fellow free-style wrester Emam-Ali Habibi, who won his gold later that same day.

Takhti’s athletic achievements are considerable, however not central to his legend in Iran. Central to his hero status is a quality best described by an old Iranian concept: Pahlevani. Strictly speaking, Pahlevani refers to a traditional athletic ritual, now recognized by UNESCO as part of the world’s “intangible cultural heritage“. The ritual used to train warriors of the ancient Persian Empire, centuries before the birth of Christ. But Pahlevani has also come to mean sportsmanship, fairness and devotion to people. The belief that Takhti was a Pahlevan par excellence is exemplified by the nickname he was given: Jahan Pahlavan, or in English, the Pahlavan of the world.

In the ring, Takhti was thought to always be fair to his opponents. Aleksandr Medvev, a Soviet wrestler known as being among the best in history, once told a story of how Takhti had refused to touch his right leg because he knew it was injured. But it is the stories outside the ring that have defined much of Takhti’s legacy.

A Committed Socialist and Political Activist

Growing up in the most tumultuous era of Iranian politics, Takhti was a committed socialist and political activist. He was 20 years old when the anti-colonialist Mohammad Mossadegh was elected as the prime minister of Iran. Backed by a large coalition, including the Iran’s strong communist Tudeh Party, Mossadegh nationalized oil assets and began standing up to the British and American-backed Shah. In 1953,Mossadegh was overthrown in a coup organized primarily by the CIA. Takhti was among the millions of young Iranians who had been actively supporting the prime minister.

In the aftermath of the 1953 coup, as the left and nationalists tried to organize a resistance, Takhti joined the Socialist Party founded by Mohammad Ali Khonji, a Bahraini-born lawyer who had left the communist party in 1947, along with many others who defined themselves as socialists not aligned to Moscow.

Already well-known as a national champion and an Olympian, Takhti was among the Socialist Party’s most popular figures. He was picked as its deputy general secretary. Takhti also sat on the Athletes Committee of the National Resistance Front, the umbrella anti-coup organization formed by comrades of Mossadegh, who had been put under house arrest after the putsch. In 1962, the congress of Mossadegh’s National Front elected Takhti as a member of its Central Council.

Takhti’s devotion to democratic and socialist values was reflected in his social life. He was known to be down to earth, organizing help for the poor and always taking time to speak to people who approached him. When a massive earthquake hit cities and villages in the plain of Qazvin, killing 20,000 and leaving many homeless, Takhti spearheaded fundraising efforts. The sporting giant hit the streets with a box around his neck and a megaphone at his mouth, raising unprecedented sums.

Takhti's Opposition to the Shah

Takhti's vocal criticism represented a particularly dangerous threat to the establishment and he was put under enormous pressure by the imperial government. His death in 1968, at the age of 37 is shrouded in mystery.

His body was found in a room in Tehran’s Hotel Atlantic and the official cause of death was registered as suicide. Some support for this version of events is offered by the fact that he had registered his will two days before his death, giving the guardianship of his son, Babak, only a few months old, to Kazem Hasibi, a well-known anti-Shah socialist.

But in the politically charged 1960’s the deaths of anti-Shah figures were inevitably linked to the Shah’s powerful secret police, the Savak. Takhti had been arrested many times and the Savak had interrogated him regularly for years.

Jalal Ale Ahmad, a prominent anti-Shah intellectual, was speaking for many when he said: “Not even for a moment did anyone believe the suicide story.”

Even if Takhti's death was a suicide, many say he was driven to it by a brutal government.

Dariush Ashoori, a critical intellectual, saw something bigger in the demise of Takhti, “a man who was destined for defeat.” Just a few days after his passing was reported, Ashoori spoke of the death as symbolizing the fall of Iran’s traditional values:

Takhti was the highest reflection or the last glimmer of the light of our traditional Pahlevani tradition. That his light has died with suicide is decisive and meaningful. Takhti represented a moral behavior, a tradition, a universe of values with deep and ancient roots and in intense contradiction with the status quo.

Takhti’s legacy was to outlive the monarchical regime he opposed. After the 1979 revolution, he was celebrated by the new revolutionary regime, although his non-islamist background was erased. Recently shared on social media was a picture of a commemorative plate sold in an antique shop in Tehran which featured Takhti next to Ayatollah Khomeini, the founder of the Islamic Republic, as well as Ayatollah Shariatmadari, the popular cleric from the northwestern city of Tabriz who was quickly suppressed after opposing Khomeini’s power grab in the early years of the revolution.

Many tournaments were named after Takhti and almost every city has a stadium or more named after him. He came to represent all the values that the decadent monarchy had forgotten and that the new republic said it would reclaim. 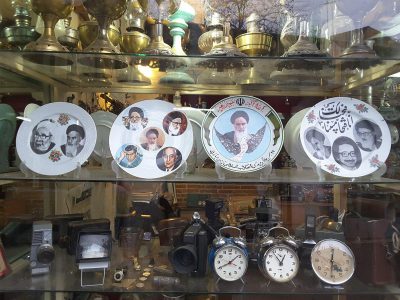 Takhti alongside Ayatollah Khomeini, the founder of the Islamic Republic, and Ayatollah Shariatmadari, the popular cleric from the northwestern city of Tabriz, among others. Photo from Iran-based Telegram channels.

Looking at the Iran of 2017, few citizens would agree that the heroic values of the socialist Pahlevan are reigning today in a society that is undemocratic, capitalistic and ever more consumerist. But his remains an example of model behavior for athletes and others. Masood Shojayi, the Iranian footballer who was barred from Iran’s national team because he took part in an European club game against an Israeli team, recently posted a picture of him, citing him as a role model.

Babak Takhti, in a widely shared message on social media, compared Shojayi with his father and lamented his exclusion. Half a century after an untimely death, Takhti’s shadow reigns over a society that has struggled over values for decades. That an institution in the US celebrates such a central Iranian figure shows that there is much more to relations between the peoples of these two countries. Beyond the fuming speeches of Khamenei or Trump, lies a mutual respect for the legacy of someone of Takhti's stature.