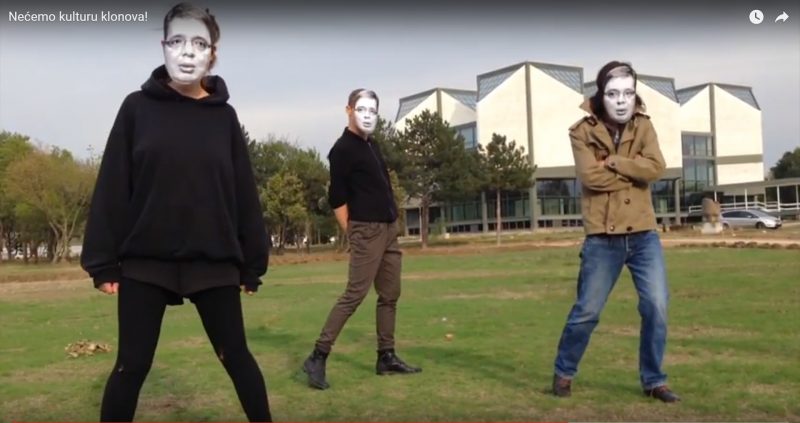 “We don't want a culture of clones!” – a screenshot from the announcement before the artist performance on October 20, with participants wearing masks with the face of Serbian President Aleksandar Vučić.

Police in Serbia have sparked outrage by arresting artists Vladan Jeremić and Uroš Jovanović for ‘insulting’ the country's President Aleksandar Vučić during the ceremonial re-opening of the Museum of Contemporary Art in Belgrade.

The Museum of Contemporary Art (MCA) staged on October 20 a reopening ceremony that marked half a century since the museum received its first visitors during communist times. The MCA has been closed for the last 10 years. As Serbian authorities hosted the lavish political event, a group of artists staged a performance protesting autocratic influences on the arts and popular culture.

The two artists were detained for several hours in the police station and subjected to interrogation. According to one of the detainees, Vladan Jeremić, the state prosecutor told the police to let them go. Jeremić said he believes the state will not press charges against the pair.

The art blog Boem was among the first to report on the incident:

The first demonstration was staged on October 20, on the occasion of the re-opening of Belgrade’s Museum of Contemporary Art that has been closed to the public for the last ten years, due to [delayed] reconstruction. The visitors were invited to put on a paper mask resembling the portrait of Serbia’s president and to hand out flyers with sandwiches printed on them to the museum's guests.

The demonstration reflects the current situation in Serbia, where, although almost everybody is unsatisfied with financing, party pressures, amateurism among leading officials and (self)censorship, only a few speak about this in public. Media control and political surveillance have led to a situation where most cultural workers, out of personal interests and fear of losing their job or financial support, are silent about the economic and mental repression they are exposed to.

After the performance ended, security checked the identity of one of the visitors, who still had some props from the demonstration in her hands. Vladan Jeremić, one of the organizers…asked police what had happened. He was checked as well, and flyers bearing an announcement [by the creative activist collective] the Unbribables and other props from the demonstration were confiscated. [Jeremić] was arrested and brought to the police station for interrogation.

Half an hour later, another artist, Uroš Jovanović, was arrested in front of the museum after he tried to enter the museum with a giant framed photograph of the Serbian president featuring the statement: “Vučić – the Best Artist”.

The printed flyers featuring sandwiches hinted at the common practice among ruling political parties in the Balkans of supplying participants at rallies and counter-protests with sandwiches and other treats. 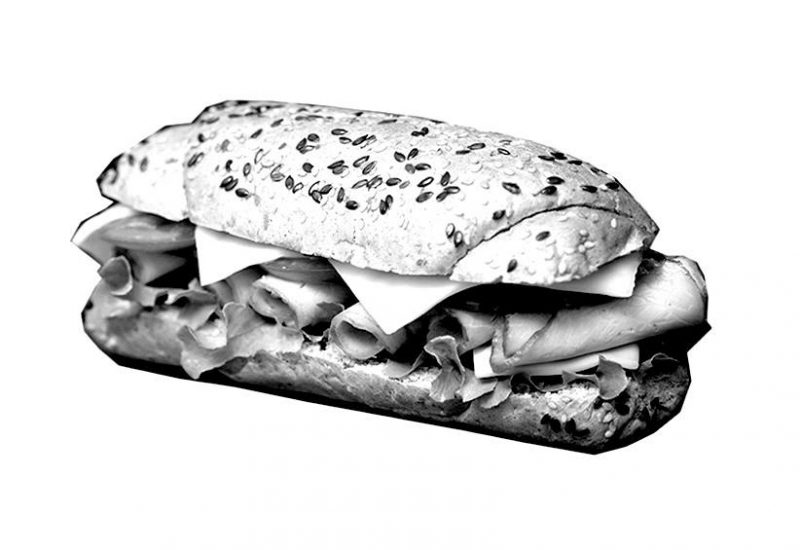 Image of the sandwich that was distributed during the performance. Courtesy of the Unbribables.

These establishment supporters are often transported by buses around the country, and sometimes carry large photos of political leaders at public events.

Recently, Serbian authorities began promoting the idea of displaying the president's image in public institutions, including army barracks, “to strengthen the cult of the state.”

They've detained a man distributing sandwiches while carrying a mask of Vučić's face and threatened him with prison for “insulting the president”. Rule of law working like a Swiss clock.

During the afternoon of October 20, hours before the protest, The Unbribables published a video clip announcing the demonstration, and invited citizens to join them at 7 pm in front of the museum.

The video clip shows activists wearing the paper masks with President Vučić's face. The clip is titled “We don't want a culture of clones.”

Artist Uroš Jovanović announced his stunt titled “Importation of the Painting of the President of Serbia into the Museum of Modern Art” via a public Facebook event.

Some of the witnesses used the discussion section of the event to post their videos of the event filmed on mobile phones.

Part of the performance included distributing flyers for the Salon of the Unbribables, a series of events staged by the Unbribables collective from October 20 through October 28 aiming “to unveil the real state of culture in Serbia”.

In recent times, Serbia is experiencing a sort of putsch in the cultural sphere, leading towards a total commercialization and ethnification of arts and culture. The manifest of these processes is the [government] Strategy for Cultural Development in Serbia until 2027. By creating The Salon we wanted to bring together “unbribable” positions, that offer a clear and loud criticism of the situation in Serbia.

Opposition MP Vesna Marjanović was one of the many Twitter users who commented on these developments:

Tweet: This is the strategy for development of culture in Serbia. Government ministers enjoying a spectacle, artists go to jail!

Domestic and international news agencies reporting on the re-opening of the Belgrade MCA did not include information about the arrests of the artists and their demonstration in their reports.