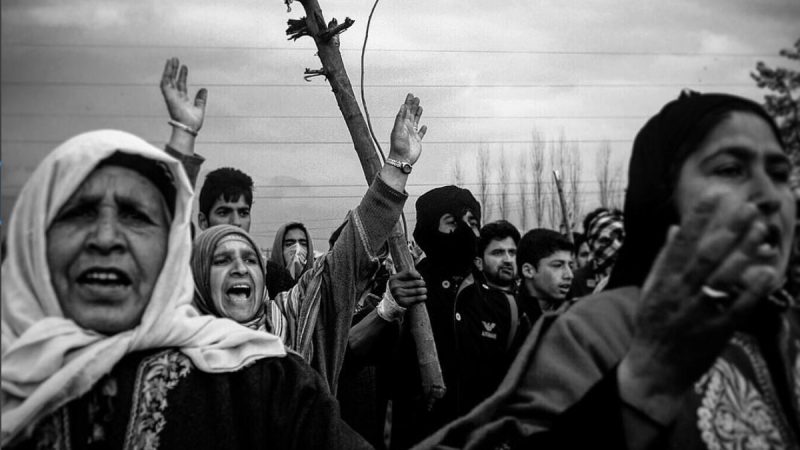 Kashmiri protestors raise slogans during a protest against the killing of a civilian on the outskirts of Srinagar, the summer capital of Jammu and Kashmir. Image from Instagram by Ieshan Wani. Used with permission

Over the past two months, at least 200 women in Indian-administered Kashmir have reported being attacked by masked assailants who cut off their braids. According to many of the victims’ accounts, the perpetrators ambushed the women inside or nearby their homes, and some allegedly sprayed chemicals to render them unconscious before chopping off their hair.

A woman's long hair is associated with her honor, and so forcibly cutting it short is not only an attack on her person but considered an attack on her honor as well. Despite their number, the incidents remain unsolved, and protests are getting fiercer by the day. The situation has highlighted the dangerous distrust that exists between locals and authorities in the already volatile region.

Over the past three decades, the people of the Kashmir Valley have demanded the right to hold a referendum on their independence. In that time, more than 68,000 people have been killed in sporadic uprisings and subsequent crackdowns. The Indian military has been accused of numerous human rights violations, including enforced disappearances of over 8,000 people.

Many Kashmiris, who live with a strong military presence in their region, are skeptical that security forces are truly in the dark about who is behind the attacks. Some even accuse the state of orchestrating the braid-chopping assaults as a way to frighten the population into submission.

It is difficult to believe that these persons can strike at will, enter homes, and get away in Kashmir where even the movements of birds and leaves are tracked. Intelligence agencies that can flush out militants from thin air, have “no idea” about these persons who have the locals chasing shadows, and each other, at any time they so wish.

The “rumor milling and conspiracy theories” being tossed around are many, said Raees –ul-Hamid Paul at Kashmir Reader:

Some people believe that it is the revival of old tactics of New Delhi, creating fear and psychosis in the public to divert them from the sentiment of freedom. But a counter question can be asked, what was the need to use this tactic at this juncture when there was a relative calm on the streets of the valley and people were doing their normal business?

While certain others believe that the motive behind such incidents is to create a soft corner for the police and the mainstream politicians to whom the scared people report and narrate these horror tales. The other theory being propounded is to squeeze the space for the militants in the valley who take refuge in the houses […] because every alien person would be looked upon with doubtful eyes by the local population […] The [Director General of] Police, on the other hand, blamed separatists for exploiting this situation to stoke unrest in the valley.

The distrust in the authorities and fear surrounding the attacks in Kashmir has led to sometimes deadly instances of mob violence. A 70-year-old man mistaken for a “braid chopper” was lynched by his own neighbors in Anantnag. Migrant laborers, non-locals and even foreign tourists have been harassed by crowds suspicious of their motives for being there.

Some have linked the series of braid-chopping assaults in Kashmir to instances of women's braids being mysteriously chopped off in a number of other Indian states earlier this year.

In many of those cases, locals said it was the work of supernatural forces, or psychiatrists blamed mass hysteria: “From the available evidence, the women are cutting their own hair either consciously or in an altered sensorium, likely to seek attention,” the former head of the department of psychiatry at New Delhi’s All India Institute of Medical Sciences told the Hindustan Times in August.

There's been pushback, however, to framing the Kashmir braid-cutting as such. As Mustafa wrote for The Citizen:

And of course there is a third explanation that was hinted at initially, but now is not really heard of as the ghosts have overextended themselves. That the Kashmiri women are hysterical and braid chopping is a figment of their fertile imaginations. But this seems to have been scorched by the widespread of such incidents […] Besides, if this was the case one would expect the authorities to prove it so, and thereby bring the braid chopping inspired terror to an end.

The chief minister of the state of Jammu and Kashmir warned that what was happening in Kashmir was meant to “create mass hysteria”:

Braid chopping incidents are attempts to create mass hysteria and undermine the dignity of the women in the state. pic.twitter.com/gwsTv5UTAH

But for the moment, Kashmiris remain without answers. Some residents have created night patrols in response. The police have registered dozens of First Incident Reports (FIRs) against alleged braid-choppers and rumor-mongers in Kashmir. According to the police, all the suspects detained so far turned out to be innocent and had no connection with braid-chopping. They are clueless and yet to capture those actually responsible and threatened legal action against those spreading braid-chopping rumors. Cash rewards also were announced to encourage people to report the culprits.

‘We Kashmiri girls feel insecure in our home now’

We Kashmiri girls feel insecure in our home now ,it's horrible .

It also threatens to reduce the space for women to go without hijab and travel where they please, wrote Arshie Qureshi in Feminism in India. She described the “patriarchal responses” she has experienced since the braid-chopping began:

In the past one week, on numerous occasions, I was asked, rather dictated, by random men and women on streets to cover my head and when I refused, the usual response was that it was women like me who had brought about this infliction of braid chopping on the entire society. Saying this not only depicted their dislike for me not covering my head, but also a certain degree of support for braid chopping of women who refused to cover their heads.

[…] My parents have started becoming uneasy with my movement outside the house in early and late hours when the streets are mostly deserted. I observe most school going females waiting at bus stands accompanied by their parents, especially males. […] So not are their braids just being chopped, the already limited participation of women in public life is gradually shrinking.

Protests have spread across Kashmir region:

The local government in Kashmir has formed a committee to address the attacks and offer medical assistance and counseling to victims. But tensions remain high. Without credible answers, women's place in the public space, as well as peace in the region, seems more and more at risk.