In Nepal, Every Dog Has Its Day—and That Day Is Called Kukur Tihar 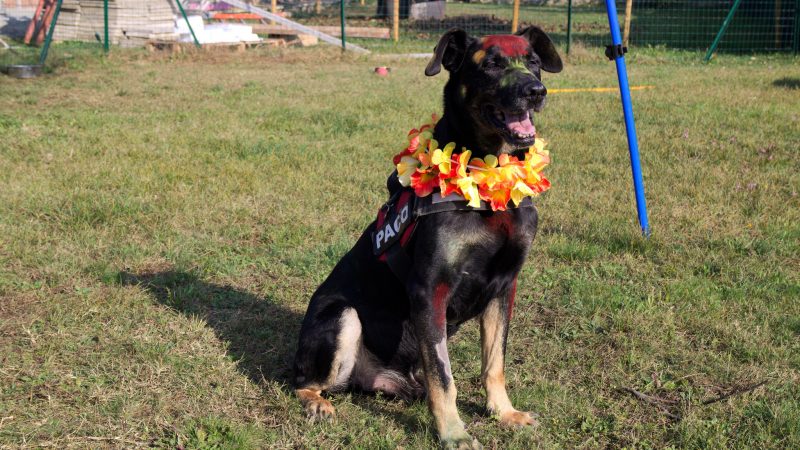 A dog decorated with red tika and garlands on the occassion of Kukur Tihar. Image via Flickr by wildstray. CC BY-NC-ND 2.0

Did you know that in Nepal and in some parts of India there is a Hindu holiday dedicated to celebrating the special bond between humans and dogs?

It's called Kukur Tihar and is the second day of a five-day-long festival called Tihar, which is marked in part with lamps and firecrackers, similar to Diwali observances in India and elsewhere. On Kukur Tihar, people offer garlands, tika (red dots) and special treats such as milk, eggs, meat, or high-quality dog food to pet dogs and strays alike.

The garland is called “malla,” and signals admiration and dignity. It declares the wearer as a vital possession and symbolizes the prayers that accompany the canine. The tika (red dot) imbues the dog with an air of sacredness and acts as a blessing to people who encounter the dog on this auspicious day.

Pradeep Singh explains on his blog:

Hindus believe that dog is the guard of Yamaraj, who is known as the god of death. Dogs are believed to be Loyal animals and this day celebrates the relationship between humans and dogs.

This year, the holiday fell on October 18, and social media in Nepal was flooded with photos of pampered pups and their happy owners.

Happy #kukurtihar to everyone celebrating. One of the coolest festivals around. pic.twitter.com/EWuHJX86WA

People also shared the prayers (“puja”) with the canines:

Reverence to every creature is the basic norms of Hindu mythology. Today is the day of Dog in Nepal. Happy ‘Kukur Tihar’ (Dog worshiping) pic.twitter.com/BGW1H2OE10

Some dog owners from elsewhere in the world also took the opportunity to celebrate with their pets:

Happy Kukur Tihar, the holiday of any nationality, ethnicity, or religion most venerating our canine friends. #KukurTihar @darth @dog_rates

If only such gestures of love could be shown to dogs all year round, one Nepalese animal welfare project pondered:

Let us give dogs the love and care they deserve, all year around ❤ pic.twitter.com/LbDljA2vT0