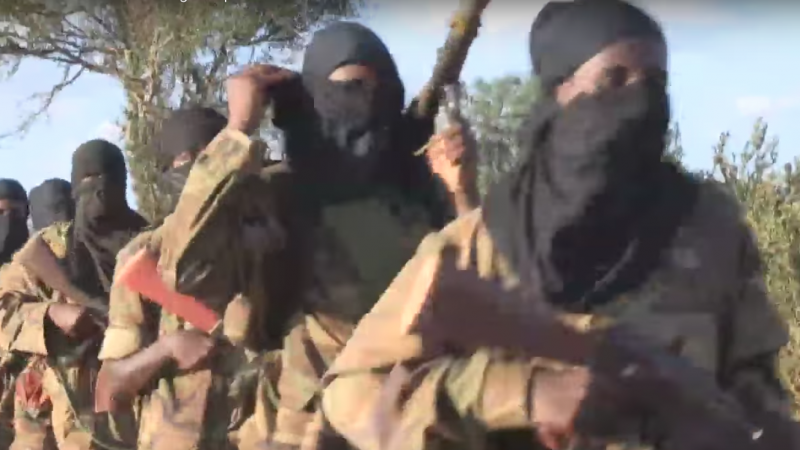 Militants of the extremist group, which currently controls around a third of Somalia and has conducted attacks in other African countries. Photo: Screenshot of a 2013 Channel 4 news report on YouTube.

Around 30 masked men attacked three police posts in northern Mozambique over three days, raising suspicions that al-Shabaab, a militant group that for years has violently fought to impose its intolerant interpretation of Islamic law in Somalia, could have a presence in the country.

The three police posts are spread across an area of 70 kilometres in the district of Mocímboa da Praia, near the Tanzanian border, and were attacked between October 5 and 7 simultaneously, indicating a methodical plan of action.

According to a police spokesperson, the confrontation left 16 dead, comprising two police officers and 14 armed attackers. Local sources, according to a report by news website NNA, stated that the assailants were armed with security forces’ weapons, and some militants were captured alive by the police and are being interrogated.

Police accounts also stated that at least three languages were spoken by the armed men: Kiwali (a local language), Portuguese (the official language of Mozambique), and Swahili (spoken by much of the population of the Great Lakes region’s countries).

There are suspicions that the group has links with al-Shabaab, which currently controls around a third of Somalia and has conducted attacks in other African countries.

The Somali group emerged in 2006 from the aftermath of the dismantlement of the Islamic Courts’ Union, which was defeated by the Ethiopian military and lost control of the capital Mogadishu which it had controlled since 2000. Somalia has been left without an effective government since 1991 and suffered from fighting between different factions.

Al-Shabaab, whose name means “the youth” in Arabic, preaches Wahhabism, the fundamentalist interpretation of Islam originating in Saudi Arabia, and espouses a strict application of sharia that includes death by stoning for women accused of adultery and the amputation of hands for robbing.

Around 18% of Mozambique’s population identifies as Muslim, most living in the country’s northern region.

The national police authorities stated that it is still not possible to know if these attacks were effectively orchestrated by al-Shabaab, but questions grew louder on social media.

Whether what we have in Mozambique is Al-Shabaab or not, here are my ideas:

-Given the porosity of our borders, security and systems of control, it is really possible that they are Al-Shabaab.

-However, I do not believe that they are in Mozambique to preach their jihad. It could be that they are making this country into their recruitment/ training camp to then “export” these soldiers to their various battlefields.

IN ONE WAY OR ANOTHER, they are there. The Mozambican authorities must deal with them at the risk of the country again being seen as a shelter for international enemies, a fear of many living in the many capitals of the global north.

The newspaper O País interviewed residents of Mocímboa da Praia – which has just over 25 inhabitants – and reported that “none of the residents of that village have the least doubt that the attacks were perpetrated by members of the aforementioned sect Al-Shabaab”.

According to sources interviewed by the report, al-Shabaab operates two mosques in the city which were deserted on the days the attacks happened, and their leaders argued for civic and Christian monuments in the city to be dismantled and for a strict interpretation of Islamic law to be applied.

A trader, Amade Mussa, said in the report that the majority of the mosques’ adherents in question are local citizens, men between 25 and 35 years of age:

They are all from here from Mocímboa da Praia, we know. Others come from Mocoche in Macomia, others come from Palma, Nangade and Montepuez. The others are from here, we know. But since the 6th, they fled. If there are people who come from Somalia, I don’t know.

Fernando Neves, president of the district of Moacimba da Praia, confirmed Amade’s account, but said that this does not necessarily imply a direct link with al-Shabaab in Somalia.

They are youths who think that, when they do that, they belong to that group, but they have no connection.

João Ventura is an Angolan citizen, who feared that this type of violence could also come to his similarly Lusophone country:

Fact: In Mozambique coordinated armed attacks occurred in a city of the country’s interior originally attributed to unknown assailants.
Perpetrators: Islamist fundamentalists who declare themselves to be Alshabab.
Intention: Establish an Islamic state in Mozambique.
Lesson to learn: The propagation of Islamism must be very well controlled and monitored in Angola to avoid similar events.
Warnings and examples are not lacking.

Ashraf Sidat is a Mozambican Muslim, who urged people not to let themselves get carried away by fear, as these groups seek to divide the country:

*MOZAMBICAN BROTHERS*…
Do not fall in the trap, do not fall for the bait of the exploiter… What happened in the north of the country aims to create war as the only objective of foreign countries to divide and rule…! How to do this!
First they attack corruption and if that does not work, they ally themselves to the opposition party supplying it with arms and power. Anyway if this does not work then they go inside the country to create hate and anger between tribes and religions… all this to create war!
We all know that our country definitely has riches in the north and this wealth is their curse. They want wars and deaths to be able to finance both sides of the conflict and they collect the war-debt with resources.
Gas oil and diamonds and gold!