What's at Stake in Japan's Snap Election? The Country's ‘Peace Constitution’, for One 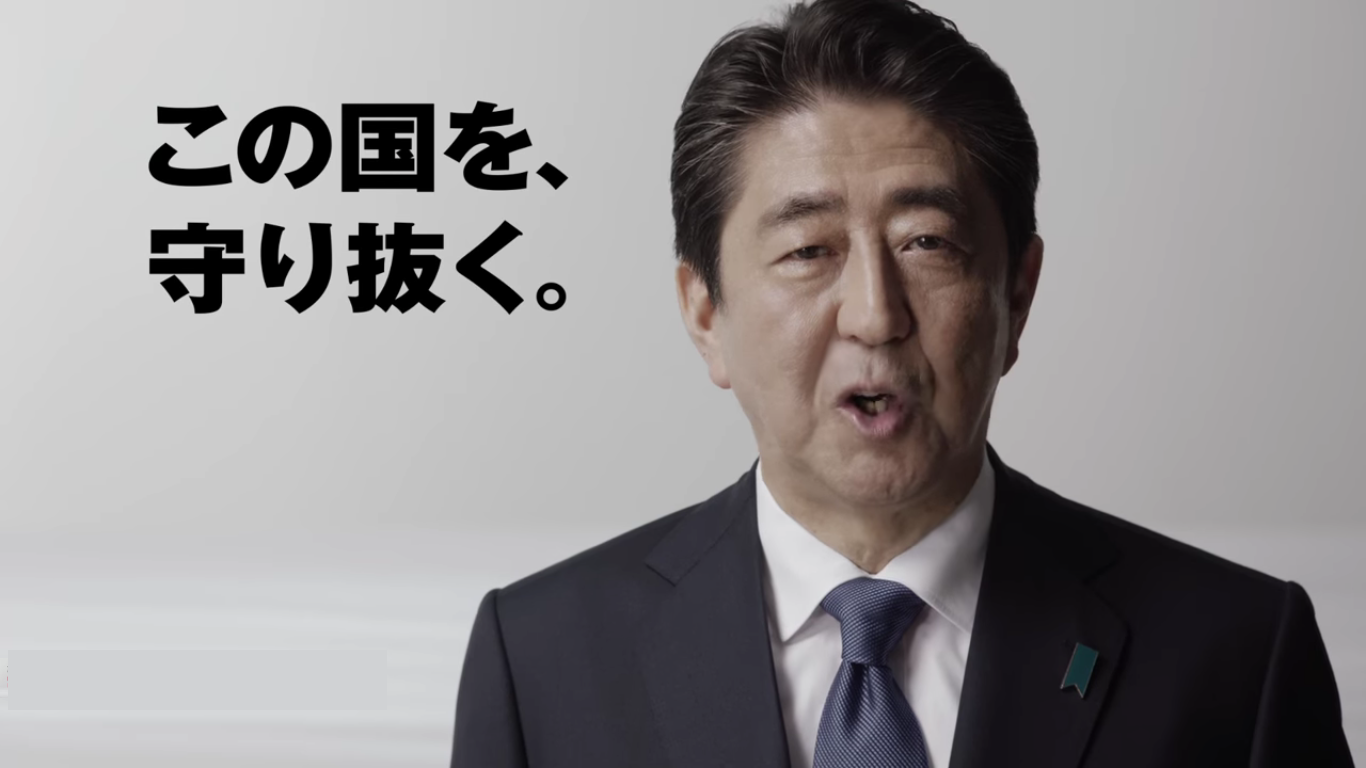 “(I will) defend our country to the end.” Screencap from LDP official YouTube channel.

Following Prime Minister Abe Shinzo's decision to call a snap election, Japanese voters will go to the polls on October 22 to decide the makeup of their House of Representatives, the lower house of Japan's bicameral parliament or Diet.

The stakes are high: the election offers Abe a chance to repair his damaged political reputation while shaking up Japanese politics and breathing life into perennial efforts to revise Japan's post-WWII “pacifist” constitution to allow the country to go to war. So far, the campaign has seen the disintegration of one political party, the birth of two new ones, and protests from a vocal movement accusing the prime minister of representing a national crisis.

Abe is hoping to capitalize on rebounding voter support in the fallout from North Korea's ongoing nuclear and missile tests. In fact, when the Japanese Diet convened for its three-month summer recess in July, the prime minister's popularity had cratered. A series of scandals had led to speculations that Abe was planning to step down, with a potential successor waiting in the wings.

But on July 4, North Korea started regularly testing true intercontinental ballistic missiles thought to be capable of striking the continental United States. Some tests landed near Japan, while by the end of the summer residents in northern Japan were receiving text messages about North Korean missiles passing overhead.

Thanks to tough talk on North Korea, Abe saw his poll ratings steadily improve over the coming months, so much that he felt confident enough to call a snap election on September 25. After North Korea tested a hydrogen bomb and US President Donald Trump threatened nuclear war, Abe adopted the campaign slogan: “I will protect our country to the end” (この国を守り抜く).

Throughout the campaign, Abe and the governing Liberal Democratic Party (LDP) have continued to use the perceived threat of North Korea to appeal to voters.

A new ‘Party of Hope’ represents a hard-right challenge

The weakness of Japan's opposition parties also made calling a snap election attractive. The Democratic Party of Japan (DPJ), the main opposition party when Prime Minister Abe dissolved parliament on September 25, had remained deeply unpopular with Japanese voters after being perceived to mismanage the Fukushima nuclear crisis when they were in power in 2011.

However, just hours before the snap election was called, Tokyo governor Koike Yuriko, one of the few prominent female politicians in Japan, announced the formation of the “Party of Hope” (希望の党, Kibo no To), a new political party intended to run candidates all across Japan to challenge Abe and the governing LDP.

Bit more #genderbalance on the front page of the #Nikkei than I am used to! #election #衆議院解散 #Koike #Abe ?? #Japan pic.twitter.com/uSGBREY4t1

Koike's new Party of Hope appeared to seriously challenge Abe‘s plans to crush the opposition and consolidate his hold on power. The largest opposition party in Japan's lower house effectively disbanded a week after the election was called, in order to allow its members to run as Party of Hope candidates, and potentially provide Koike's unfunded party with the now-defunct DPJ's election campaign subsidies worth nearly US$150 million (the DPJ still lives on in Japan's upper house, the House of Councillors, which next has an election in 2019).

As a result of Koike's hard-right approach, yet another new party was launched during the election campaign, this one dedicated to preserving Japan's “peace” constitution.

Another new party wants to save Japan's post-war ‘peace constitution’

Based on social media statistics, at least, this new party, dedicated to constitutionalism, peace, freedom of expression and democracy, appeared to quickly eclipse Koike's Party of Hope:

JPN Politics: Hope Party (Kibo no To) losing momentum and altitude fast. Case in point: the Kibo no To Twitter account
4,240 followers
4 (no, that is not a typo) tweets pic.twitter.com/sz2iSyG7Ks

Contrast this with the @CDP2017 account of the Constitutional Democratic Party of Japan:
123,000 followers
119 tweets

By mid-October, with less than a week to before the end of the election campaign, Edano's Constitutional Democratic Party had become the most popular opposition party by a percentage point, although many voters still said they had not decided who they would vote for:

The Constitutional Democratic Party is expected to gain support at the expense of other left-leaning parties, notably the Communist Party of Japan:

According to polls, Abe's LDP still appears to be in the lead, and is expected to easily form government after the election on October 22.

However, the prime minister has still encountered protesters while out on the campaign trail, and is also confronted with a hashtag on social media: “#You're_the_National_Crisis (#お前が国難).”

The hashtag reflects the sense of national crisis Abe has fostered since North Korea began its missile and nuclear tests over the summer, and the crisis that will occur should Abe be reelected to pursue revising the constitution to allow Japan to go to war.

Protesters have become such a problem for the prime minister that he has had to avoid publicizing campaign events ahead of time. In this video (see 1:40), protesters hijack an Abe election event with placards stating the prime minister is the real “national crisis” or disaster, and that he should quit:

At other election events, crowds have gathered to voice their support of protecting Japan's constitution from Abe and other parties devoted to revising it.

Abe headed for a win, even if he loses the chance to revise the constitution

Besides plans to revise Japan's constitution, Abe and the LDP have also spooked the electorate by planning to double Japan's consumption tax (VAT) to 10% in order to pay for social programs such as elder care and daycare in order to encourage women to enter the workforce.

Still, an October 11 survey by the Yomiuri newspaper showed the LDP and its coalition partner winning close to 300 seats out of 465 members of the House of Representatives in the bicameral National Diet of Japan.

While the LDP and its supporters could fall short of the two-thirds majority (a super-majority) in both houses of the National Diet needed to trigger the process for revising the Constitution, Abe's position as prime minister will likely be cemented on October 22. This will make him one of Japan's most successful postwar prime ministers.