Was the Anti-Kleptocracy Rally That Gathered Thousands in Malaysia a Success or Failure? 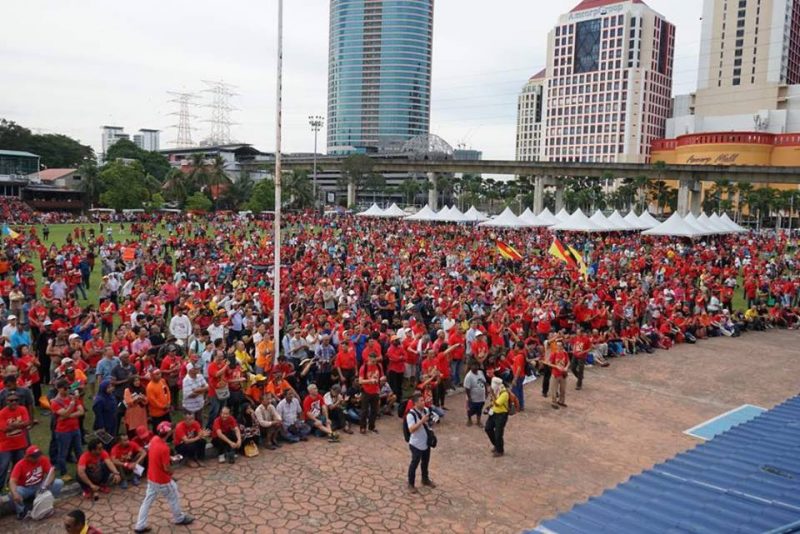 The anti-corruption rally in Kuala Lumpur ended peacefully. Photo from the Facebook page of Pakatan Harapan

An opposition-led rally was held on October 14, 2017 in the Malaysian capital of Kuala Lumpur to denounce corruption in the government.

According to Pakatan Harapan, the main opposition coalition which organized the rally, they were able to gather 25,000 people. But the police said only 4,000 joined the protest. Most media reports pegged the number of participants at 8,000 to 10,000.

During the rally, opposition politicians appealed for public support to remove the ruling party in the next general elections. The United Malays National Organisation has been in power since the 1950s.

Thanks for being here, my fellow Malaysians! Love Malaysia, save Malaysia! pic.twitter.com/x53LpMsNn6

The 1MDB scandal has polarized Malaysian politics. It generated widespread public outrage which led to massive rallies across the country to call for Najib's resignation. Even former Prime Minister Mahathir Mohamad publicly called for the ouster of Najib, his former protégé.

The October 14 anti-kleptocracy protest was supposed to be the culmination of a two-month information campaign by Pakatan Harapan. The coalition originally targeted a crowd of 100,000.

The number of people who ended up joining the rally was many times smaller compared to the 100,000 anti-corruption protesters who gathered in the capital in 2015.

Thousands but not quite the 100,000 they were hoping for at the anti-kleptocracy rally. pic.twitter.com/U5EyNaMT3K

There were various perspectives as to why Pakatan Harapan delivered a ‘dull’ rally with a lower than expected turnout. Some blamed the lack of preparations on the part of the organizers, the failure to convince young people to join the protest, the dominance of politicians in the program and their not so subtle appeal for votes, and the main message of the rally which focused too much on corruption rather than the economic needs of ordinary citizens.

Blogger and activist Anil Netto highlighted the comment of one his readers, PolitiScheiss, who analyzed the program of the rally:

…the speakers were too heavy on condemnations of corruption, kleptocracy, the 1MDB issue.. and shouts of “Reformasi!” [reformation or change] instead of saying more about how a Pakatan government, if elected, will deal with issues such as the rising cost of living, unaffordable housing prices, public transit, declining education standards, affordable public healthcare, the problem of flash floods, environmental degradation and so forth.

Whether or not the rally boosted the political and electoral influence of Pakatan Harapan remains to be seen; what is certain is that it fell short in mobilizing a massive crowd that could affect the plans of the broader anti-corruption movement in the country.

Below is a video showing an aerial shot of the protest