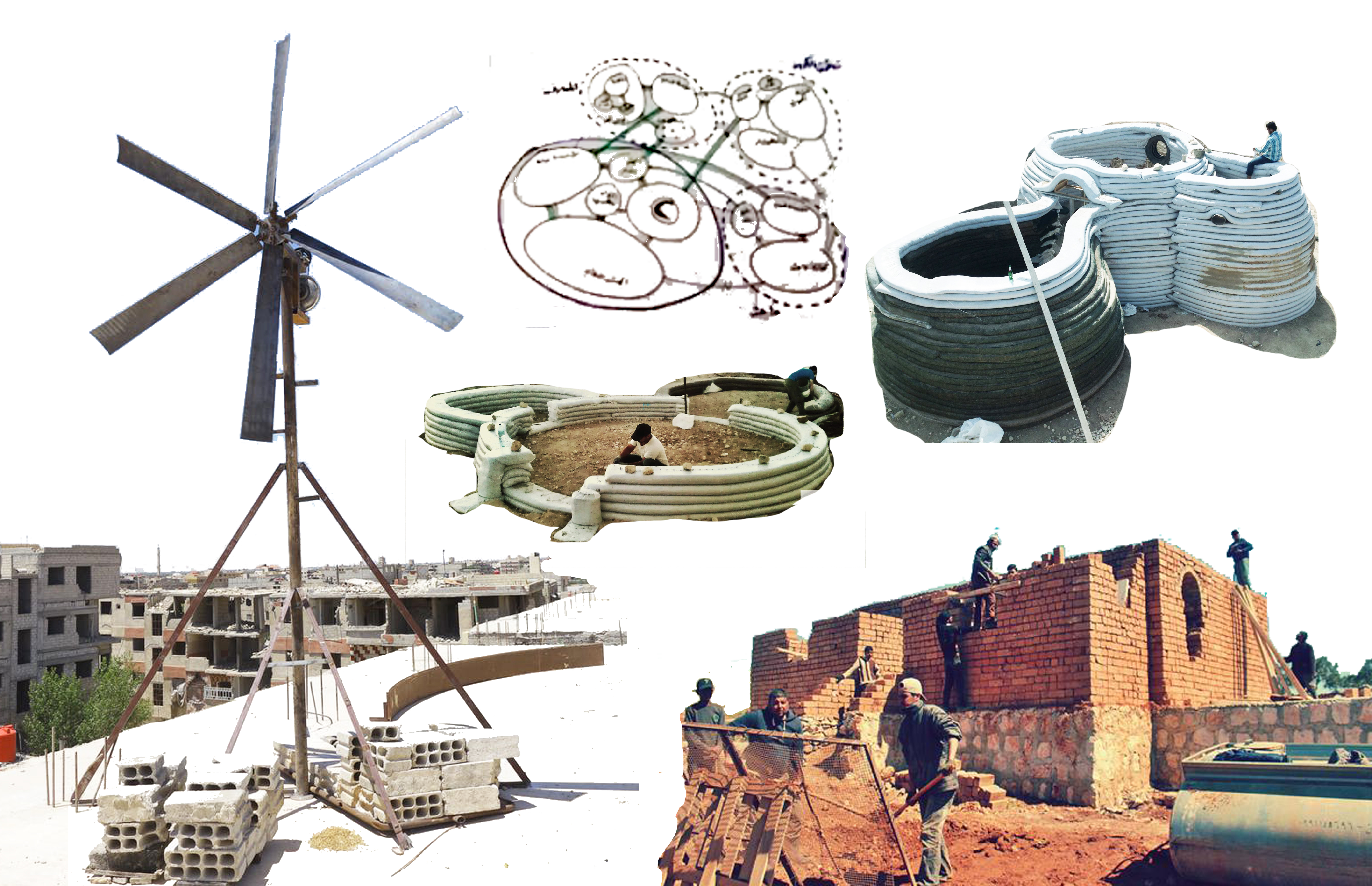 In the midst of escalating aerial bombardments of Aleppo by the Assad regime and its allies in February of 2016, an international design competition titled “Syria: Post-War Housing Competition” appeared online.

Organized by “Matter Better,” a website aiming to solve “the actual problems of mankind by organizing open-idea competitions in the fields of architecture and design,” the competition underscored the differences between Syrian and non-Syrian approaches to reconstruction during war-time.

The competition focused on a ‘post-war’ reality and asked participants to “propose a solution to the housing scarcity crisis as more cities in war-torn Syria are freed and refugees return.” It also invited competitors to design “living conditions which will be attractive for once-displaced Syrians to return.”

It also encouraged designers to “think on a bigger scale” and to “propose a typology which could be used anywhere in Syria and an infinite number of times until the post-war housing crisis is solved.”

Prominent mainstream architecture platforms like Archdaily published the call and attracted 245 design submissions mainly from Europe. No Syrian or Middle Eastern architect was part of the jury panel comprised of members from Europe, Russia, and the United States.

Reconstruction begins during, not after the war

Architects, engineers, and civil society activists from Syria have been envisioning and implementing a very different reconstruction process in their country that focuses on the present.

Their “bottom-up” and resourceful approach is based on the idea that reconstruction efforts cannot be postponed to an indefinite and hypothetical “post-conflict” future. Many architects on the ground believe that the need for reconstruction is urgent and also inseparable from ongoing rehabilitation and civilian protection.

Their approach has resulted in a proactive and uninterrupted engagement with rehabilitation projects throughout the conflict. The resulting projects may be less visually grand than non-Syrian projects, but they focus more on engagement with the emerging social, economic and political actors on the ground.

Qibaa Studio, a young architectural collective from northern Syria, has been testing “people-centered” housing strategies using local resources and vernacular approaches since 2013. Their goal is to “preserve Syrian culture while utilizing and developing local capacities.” Their mission statement explains:

We are a group of Syrian architects who happened to meet in the Northern parts of Syria in the wake of the Syrian Revolution in 2011. Amidst the huge destruction that our country has been undergoing, physically and socially, we deeply believe that planning for reconstruction begins now, during the conflict and not in its aftermath. It begins in the hearts and minds of those who suffer the horrors of war and want to change societies so that there is no return to violence. It is an essential part of negotiating our way towards peace.

Driven by this belief, we established Qibaa in 2013, a studio aimed at developing sustainable practices through which we can spatially address the urgent needs of our communities in the current situation, while setting the ground for a sustainable recovery process for our war-torn country on the long run.

Khaled Malas, a Syrian architect and curator from Damascus and co-founder of the Sigil Collective, has also been involved in the rehabilitation process through site-specific “monuments of the every day” and “rural architectures of resistance” in areas besieged and targeted by the Assad Regime.

Malas defines his role as an architect who builds upon existing networks of resiliency established by local civil society organizations across Syria to preserve life and dignity during the war. Describing the nature of his work, Malas writes:

Whilst contemporary conditions appear dire, people have not lost hope. In Syria, an empowering resistance originates within the everyday of those who dare to diligently think and act differently. It is amongst these brave men and women that we have located our collaborators. Amongst other forms, our alliance is given material expression in a series of humble rural and semi-rural architectures.”

Omar Abdulaziz Hallaj, an interdisciplinary Syrian architect and urban planner from Aleppo, calls on the mainstream media to debunk notions of  “post-war” reconstruction as a “myth.” During a recent workshop and seminar at the Department of Integrated Urbanism and Sustainable Design at Stuttgart University Hallaj explained:

This notion that one day the conflict will stop and the next day a grand national reconstruction will begin is a fake paradigm. There’s not going to be a “day after.”

Hallaj believes that a centralized, large-scale, nation-wide reconstruction process is simply impossible and that any serious redevelopment effort has to take into consideration notions of informality, local economies, and decentralized planning.

The reality is that centralized planning approaches for reconstruction are not going to be feasible, they never were, and they never will be. In reality urban growth will mainly take place in the informal sector with a few exceptions where neoliberal policies will incentivize limited opportunities for the emerging war lords and their regional partners. But of course these few exceptions will look great in front of the camera and they may bring in a few hundred thousand tourists eventually in 20 years. There’s probably going to be two or three such exceptions in Syria with beautiful landscapes and restored facades like in Beirut. Areas that very few will be able to go to. The rest of the country is going to be desolate land.”

“We need to change the paradigm. We need to move away from centralization and accept decentralization as a new paradigm for decision making processes. We need to accept informality because we can no longer create normative, beautiful, grand solutions that are not going to be implemented. If anything, these normative beautiful solutions will increase the corruption. We need to move away from strict spatial planning to flexible negotiations and social actors on the ground.”

During a recent lecture at Venice University's Department of Architecture, Hallaj discussed displaced Syrians’ ‘right of return’ to their homes and neighborhoods. He explained that through design architects play a critical role in either facilitating or obstructing the achievement of this right: