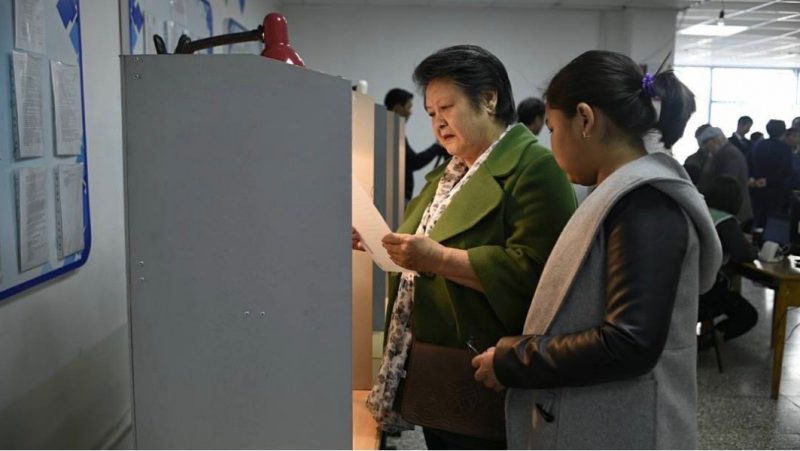 Photo by Danil Usmanov for Kloop.kg. Used with permission.

Formerly communist Kyrgyzstan is the only country in its authoritarian neighbourhood to host genuinely competitive presidential elections.

To the north of the mountainous Central Asian republic lies Kazakhstan, which has been ruled by 77-year-old autocrat Nursultan Nazarbayev since before its independence in 1991.

To its south is Tajikistan, whose dictator of more than two decades Emomali Rakhmon came to power during a civil war and stayed put.

To its west is Uzbekistan, where the regime of late despot Islam Karimov was widely reported to boil dissidents.

To its east is China, which has been under the rule of the Chinese Communist Party since 1949.

If Kyrgyzstan's vote goes smoothly it should ensure the first peaceful transfer of power between two elected presidents in the republic of six million.

The country's first two presidents were overthrown in revolutions while the country's third “interim” president was not elected, but endorsed by referendum.

Here are 14 tweets to provide readers outside Kyrgyzstan with an idea of some of the themes that have characterized this vote.

Like in any election, but particularly because Kyrgyz votes are associated with political instability, some can't wait to see it end.

The main character in this video is pursued home by an agitator asking him to vote for a specific candidate: “Ugh! I'm so sick of this! When will the elections be over already!?”

The message at the end of the video reads: “Elections 2017. Hopefully they will end peacefully!!!”

The state monster, to be exact.

This voice-overed video depicts pro-government candidate Sooronbai Jeenbekov as the Incredible Hulk emboldened by the machinery of government (or what are referred to in the ex-Soviet region as “administrative resources”) with his main challenger oligarch Omurbek Babanov struggling to compete.

Their dialogue in the Kyrgyz language runs as follows:

Babanov: “I am Babanov and [neighbouring Kazakhstan's ruler] Nazarbaev is backing me. I will buy people with my money. I will buy you all too.”

But is this Babanov fellow a worthy candidate?

It depends who you speak to.

Some say he is a ruthless and slimy former oil trader with connections to criminals.

Others argue he is the reform-oriented progressive politician capable of lifting Kyrgyzstan out of its long post-Soviet stagnation.

At any rate, he looks good with a dove.

Omurbek Babanov: Let there be peace and prosperity in Kyrgyzstan!

And women often call him handsome

A newspaper salesman just came into [a cafe] in a very good mood, offering girls newspapers. “Do you love Babanov?”

What a moment with his family!

And the older generation of Babanovs looked pretty cool, too!

So, he's rich and good-looking. What about the other guy?

On top of being backed by the state machine, Jeenbekov has his supporters.

Here he is pictured in a hat to the left of Aida Kasymaliyeva, a popular former journalist and MP in the ruling Social Democratic Party of Kyrgyzstan.

Jeenbekov's supporters say they like the fact he is unflashy and committed to hard work and stability.

How do these ‘administrative resources’ work?

A bit like this. Here a media outlet claims citizens are being bussed to polls to vote for Jeenbekov.

More seriously, supporters of Babanov have been arrested in the run-up to the vote.

Nevertheless, the actual count is expected to be fairer than in previous presidential elections thanks to the use of biometric technology.

Bussing in favour of Jeenbekov.

Is vote buying a problem, too?

Yes, on all sides. And exposing it is a dangerous business for journalists.

Another journalist assaulted in #Osh trying to film the distribution of cash to voters. #Kyrgyzstan https://t.co/OBy5gm9CvC

Are there any other candidates in this election?

Of course, and thanks to them it could go to a second round.

In the tweet below a Kyrgyz netizen applauds the performances in a presidential debate of ex-Prime Minister Temir Sariyev and Taalatbek Masadykov, a former United Nations expert who received his Masters degree in the United Kingdom.

Then there is this guy…

He famously announced the end of winter and called Russian President Vladimir Putin “a complex bio-robot”.

He has promised the world a new era under the leadership of the Kyrgyz people, and he is apparently writing a book.

He isn't expected to get much of the vote, though.

If we just let this person [be president], he will save the world!

Has the Bulldozer retired?

Then there is Azimbek Beknazarov, who says he is not participating in the vote but is on the ballot anyway.

His nickname is “the bulldozer” due to his active participation in the 2005 and 2010 uprisings.

This was his pre-election campaign commercial which was shown on television before he dramatically withdrew his candidacy during one of the debates.

Old man: “Who did you say is coming? Beknazarov, the bulldozer of the 2005 revolution?”

Woman: “Beknazarov, the one who brought up the issue of Ungar Too [territory disputed by Kyrgyzstan and Uzbekistan]?

Old man: “Oooh! That is very good. If there is anyone who can straighten out our society, it is him. Support him!”

With an ad campaign like this, Beknazarov will crush his opponents, no doubt!

What is the outgoing president up to?

Stirring, the pot, as usual. Almazbek Atambayev was limited by the constitution to a single, six year term in office following his own election in 2011.

Any hopes that the president would offer up a veneer of neutrality for the vote have been thoroughly dashed during the last few weeks, however.

He spoke again on election day, claiming representatives of the fabulously wealthy Babanov had offered him $20 million to endorse him, without offering proof.

With his speeches invariably inflammatory, one foreign correspondent suggested it would be better if he did not speak at all.

Given his recent eccentric remarks, this looks like an ideal Atambayev press conference #Kyrgyzstan pic.twitter.com/XeIQpSxaaE

This sounds like a great story, but how will it end?

As mentioned, a second round is fairly likely, assuming the vote is sufficiently clean.

After that, who knows? But some have seen negative omens in the pre-election campaign of slight favourite Sooronbai Jeenbekov.

An electronic banner calling on voters to vote for Jeenbekov malfunctions, leaving an on-screen message: “A threat has been detected”.