One Mother's Tireless Pursuit of Justice for Kashmir's Disappeared 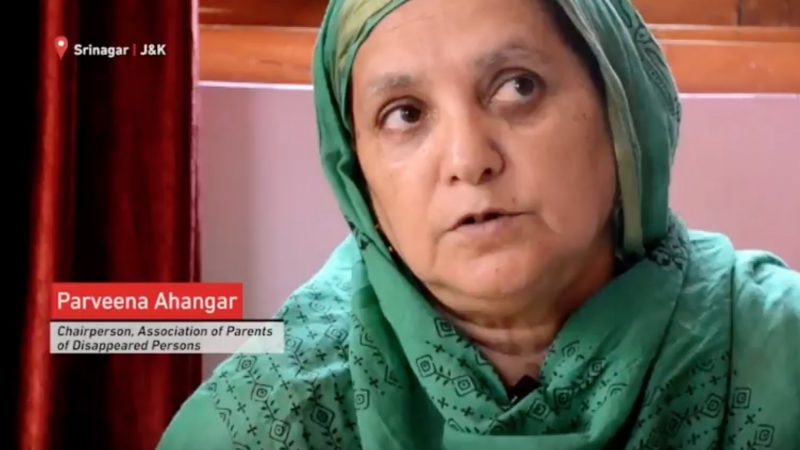 Losing a child is hard enough. But imagine not knowing where they might be and waiting for 27 years. One night in 1990, Parveena Ahangar’s 17-year-old son was captured by paramilitary personnel from Batamaloo locality of Srinagar, the capital of the Indian state of Jammu and Kashmir, on the suspicion of being a militant.

Parveena has waited ever since for some definitive news on her son's fate. And she is not alone. Unofficial estimates by human rights groups establish the figure of “disappeared people” at over 8,000. Alongside this is definitive proof of unmarked, mass graves in Kashmir holding the remains of over 7,000 people.

Muslim-majority Kashmir is geographically divided between India and Pakistan and claimed in entirety by both. Twelve million live in the Indian portion of Kashmir and many want independence. Since 1989, more than 68,000 people have been killed in sporadic uprisings and subsequent Indian military crackdowns. Today, it is the most densely militarised zone in the world, with a presence of more than half a million soldiers.

Social worker and Video Volunteers community correspondent Nadiya Shafi reported about the resistance of the parents of the disappeared, spearheaded by Parveena:

By 1994, Parveena’s dogged determination to get justice led to the formation of Association of Parents of Disappeared Persons (APDP). Parveena would travel to remote areas of rural Kashmir to seek out the families of people who had been abducted, mostly by the Indian military and paramilitary forces, never to be seen again. She commented:

I had to give up the burqa. I had to appear in courts, visit military interrogation centres. It was not possible to do all that in a burqa. I did it for my son.

Enforced disappearance is only one in the long list of human rights abuses that the Indian state and military establishment in Kashmir stand accused of. However, there has never been any attempt to allow the law to take its course and conduct independent inquiries into these cases.

Since 1993, the United Nations Special Rapporteur on Torture has been denied entry into the valley. The country's Armed Forces Special Powers Act (AFSPA) and the Public Safety Act (PSA) give impunity to armed personnel in the state in the name of combating insurgents. The draconian laws give troops the right to shoot to kill; arrest anyone as young as 12 with force and without a warrant; enter and search any premise and stop and search any vehicle; occupy or destroy property in counterinsurgency operations; and detain Kashmiris for up to two years without charging them. There can be no prosecution, suit or any other legal proceeding against anyone acting under those laws.

In not a single case of rights violation from custodial torture to murder, disappearances, rape has the accused been tried by the civil courts. In the most high profile case of recent times, the armed forces tribunal suspended the life sentences of five personnel from the Rajputana Rifles regiment of the Indian Army for luring Kashmiri villagers with the promise of jobs and killing them, staging it to appear as a foiled infiltration bid by militants.

Despite the judiciary's failure to successfully address any of the wrongs committed in name of combating terrorism, Parveena has persevered, traveling from Kashmir to Delhi and Geneva to appeal before international rights bodies.

It wasn't an easy task to bring together the parents, wives, and children of disappeared persons across the valley. Most of the relatives belong to poor, rural families often without access to lawyers and human rights activists. Parveena said:

They were often threatened to not file First Information Reports (FIRs) and the police would also not register cases. I assured them that nothing will happen to them, that I will always be in front of them and that I needed them at my back. We have even traveled to Delhi and protested and held hunger strikes at Jantar Mantar monument.

Her activism and pacifism earned her a Nobel Peace Prize nomination in 2005. Parveena remains steadfast in her goals:

Is the law only for the military, the [Border Security Force], the Special Tasks Force? They offer us compensation of 100,000 Indian rupees [1,540 US dollars]. We don’t want their money. We want our children back.

India has signed but not ratified the International Convention for the Protection of All Persons from Enforced Disappearances. With her indefatigable activism, Parveena hopes to create enough international pressure on India to treat enforced disappearance as the culpable criminal offense it is.