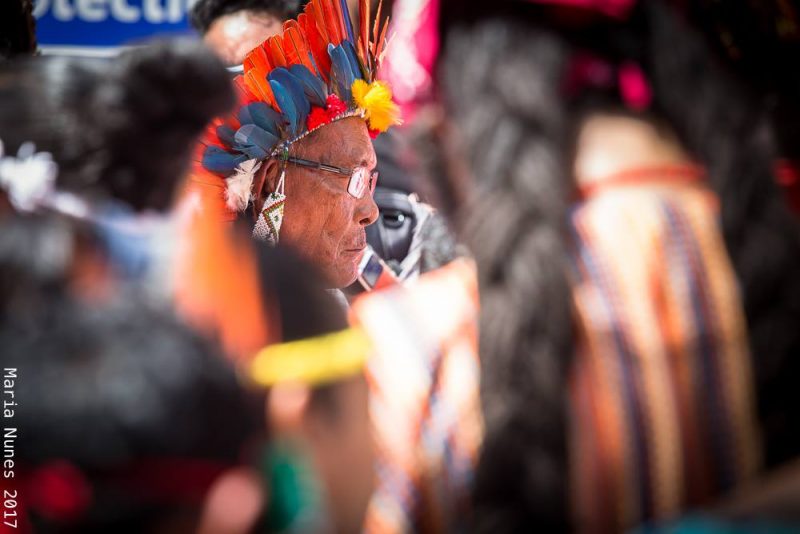 Photo from the Ceremonial Walk around The Red House, October 12, 2017. Photo copyright: Maria Nunes, all rights reserved, used with permission.

For the first time, the government of Trinidad and Tobago has recognised its indigenous community, by granting what has been deemed a “one-off holiday”. The day, which honours the First Peoples of the nation, is an effort to bring national awareness to their history, customs and contributions. This despite the fact that many social media users believe any public holiday granted to the country's Amerindian descendants should be an annual one.

In a Letter to the Editor at the popular site Wired868, Alana Abdool wrote:

I have often wondered where Trinbagonians stand on the idea of a national heritage. It seems to me that the average Trinbagonian, more so the first half of that word than the second, are less interested in why a national holiday exists than in that it exists. […]

Is it really proper that, [on] the list of 14 public holidays […] there should be no annual national celebration of the autochthonous group?

Surely these people, these peoples, do not deserve to be treated as if they are somehow children of a lesser god? How dare we argue that there are not enough of them to merit annual recognition when they are certainly not to blame for the smallness of their number?

I think today is a good time to reflect on what is the real message of the choice we have made, of the selective narratives we have perpetuated. 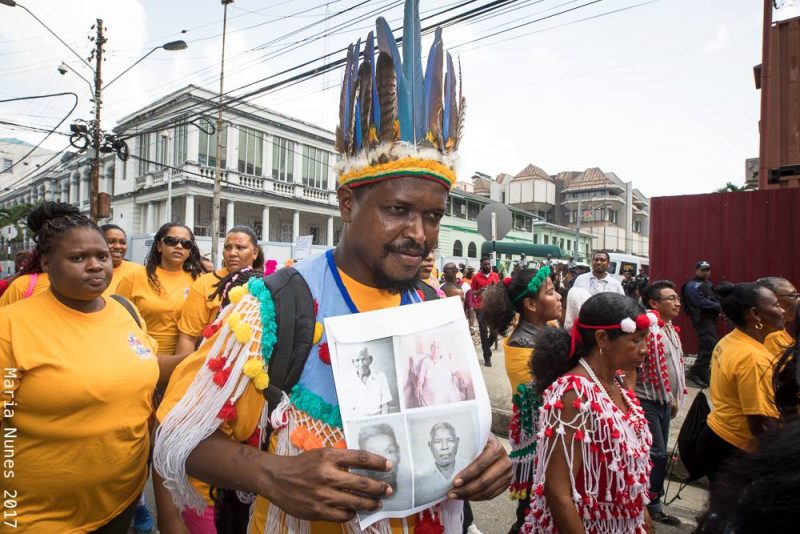 A member of the First Peoples community holds up photographs of his ancentors. Photo by Maria Nunes, Copyright 2017, used with permission.

Still, in preparation for the celebration on October 13, members of Trinidad and Tobago's indigenous community (their forefathers called these islands “Iere”) paraded through the streets of the capital, Port of Spain. The walk began, quite symbolically, at The Red House, the former seat of parliament, which has fallen into a state of disrepair. In 2013, as extensive renovations were in progress, the skeletal remains of what is believed to be indigenous ancestors were discovered under the building's foundations. As photographer Maria Nunes, who covered the event, noted in a Facebook post, prior to Port of Spain being established as a port by the Spanish during colonisation, it had been “a well established area of settlement by indigenous people for nearly 1,500 years”. 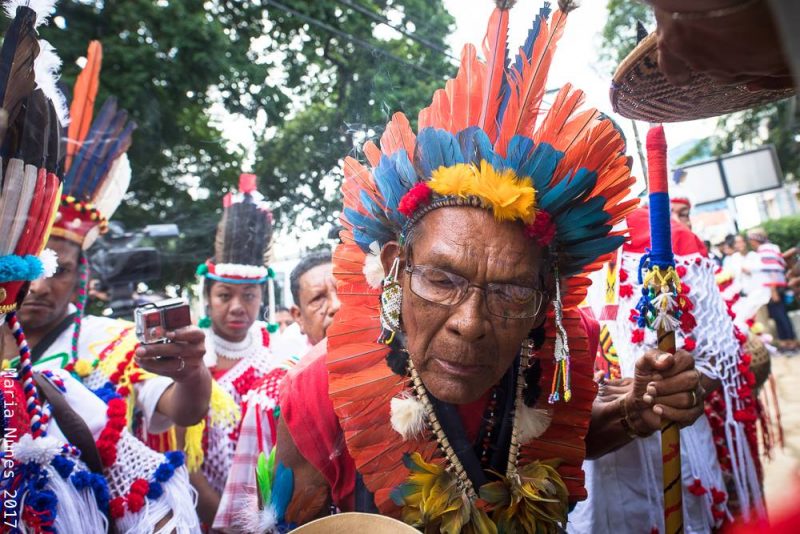 Ceremony at The Red House to honour indigenous ancestors whose skeletal remains were found under the building's foundations in 2013. Photo by Maria Nunes, copyright 2017, used with permission.

The Santa Rosa First Peoples community laid out a vision for themselves in a video on their Facebook page, which was quite active with posts related to the celebration of the First Peoples Heritage Week.

On social media, both individuals and organisations paid tribute to the community. On Facebook, The National Trust of Trinidad and Tobago, which is charged with the responsibility of safeguarding the country's natural, built and cultural heritage, posted a video about the UNESCO Heritage Banwari Trace Archaeological Site (the oldest pre-Columbian archaeological site in the Caribbean), and expressed hope that the holiday would bring “greater awareness to the contribution of the Indigenous Community of not only Trinidad and Tobago, but the rest of the Caribbean and the World!” 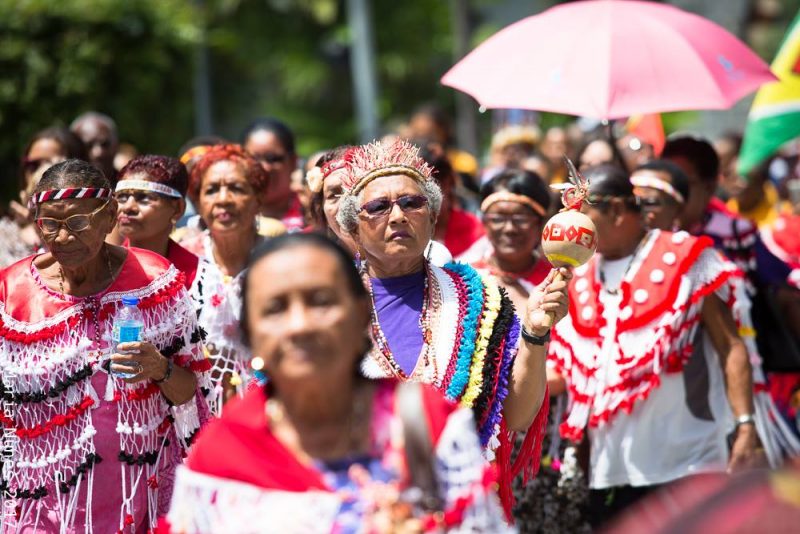 Members of the First Peoples community in Trinidad and Tobago. Photo by Maria Nunes, copyright 2017, used with permission.

The National Library, which is situated just opposite to The Red House in Port of Spain, created an educational display on the First Peoples in its atrium. It attracted a lot of foot traffic throughout the week, including visits from primary and secondary school students. 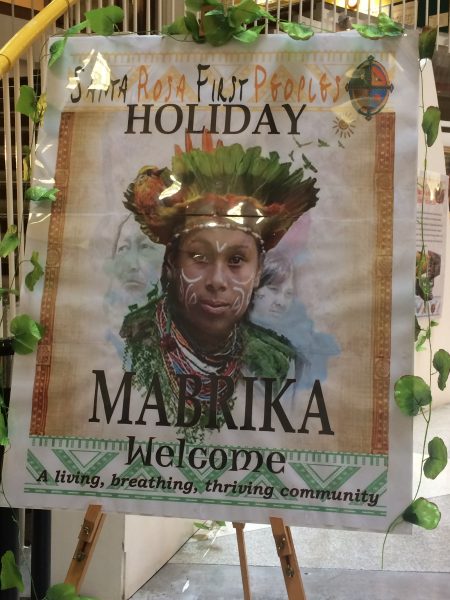 The sign welcoming visitors to the Amerindian exhibition at the National Library in Port of Spain, Trinidad. Photo by the author.

On the Santa Rosa First Peoples blog, the community talked about their history and legacy:

We, descendants of our First Peoples still live in Trinidad. We continue to fight for and defend our way of life. Our ancestors owned and named our world. Many of these names have survived to date. […]
Plants and animals such as carat and timite palms, tobacco, cacao, ceiba (silk cotton tree), maize, manicou, agouti, lappe and many more
Many of our present towns and villages are built on ancient Amerindian settlement sites
Some of our roads are built on old Amerindian trails. […]
Parang, utilizing both Spanish and Amerindian instruments emanated from the evangelization of the Amerindians. Arima and Siparia, two large Amerindian mission towns have given us our two oldest festivals: The Santa Rosa festival and La Divina Pastora. We continue to enjoy the foods that our ancestors enjoyed such as wild meat, cocoa, cassava, roucou, corn, maize and warap. Similar to our Amerindian forbears we barbecue our meats and season them with chardon beni (cilantro). We too relax after eating in a hammock. 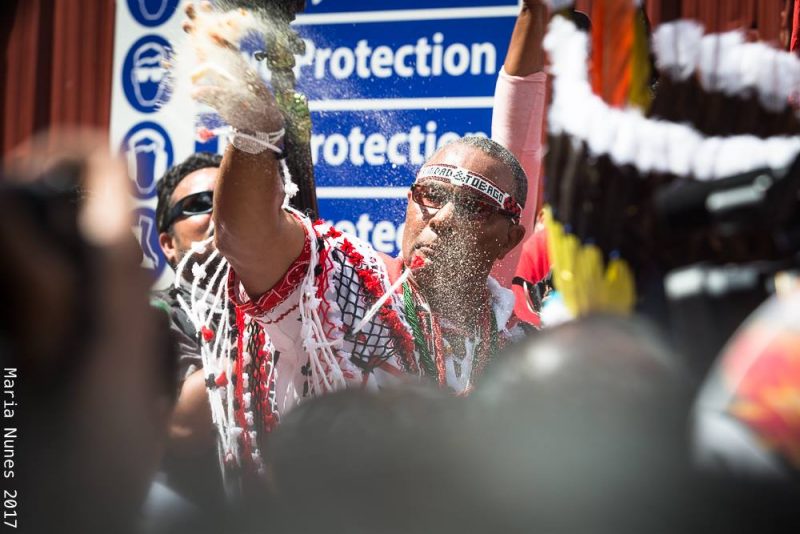 Part of the ceremonial ritual to honour the First Peoples’ forefathers. Indigenous remains were unearthed beneath the foundations of The Red House in 2013. Photo by Maria Nunes, copyright 2017, used with permission.

In their honour, the Trinidad + Tobago Film Festival created an event, Indigenous Voices, celebrating films that explore “a diverse spectrum of indigenous storytelling and a powerful narrative on the disappearing indigenous cultures of Trinidad and Tobago and the Americas”. Tracy Assing, who is part of the First People's community, will have her film, The Amerindians, screened at the event, which is free to the public. On the occasion of the “First Peoples’ One-Off Holiday 2017″, she wrote on her Facebook page:

One day they came.
We were expecting them
with their swords and crosses, shields and scripture glinting in the hot sun. […]
Wild we must have seemed as we greeted them with gifts of proper clothing and food, healed their wounds with herbs. They spoke another language. They made notes.
We showed them how to hunt and how to plant. We gave thanks for all things.
They gave us clothes that made us sick and told us we were ungrateful. They said grace was something we had to learn. We could only be saved by suffering. […]
One day they took more than we offered. More of them came. […]
We were expecting them. They did not know our numbers. We watched from the forest. We knew this day would come. The wind whispered a warning.
One day they used their weapons against us.
Skin split, blood spilt as the children watched. The bones buried now. […]
I lost count of those that fell, to the East and the West, to the North and South. Once we lived on all the islands. Once the forest was home.
They do not know our numbers. We never left the islands.
We walked among them. Invisible. Present. Walk. […]
The Empire is still hunting for our blood. The Empire wants to know the secrets we whisper to the plants.
I remember the blood nehneh.
[…] Ma Tom crossed the mountains and the valleys with stories, every day, each step knitting us closer, making sure we would not forget.
We go to the forest for incense. We go to the forest. […]
At school they told me we were dead. How do you know you are indigenous?
I knew their words now. Absent from the census. It does not matter what we are called, we know who we are. It is you who do not recognise me. […]
Our children are restless and angry, waiting for that day.
Through a pact, they tried to give us one day back.
After many cycles around the sun, only one. 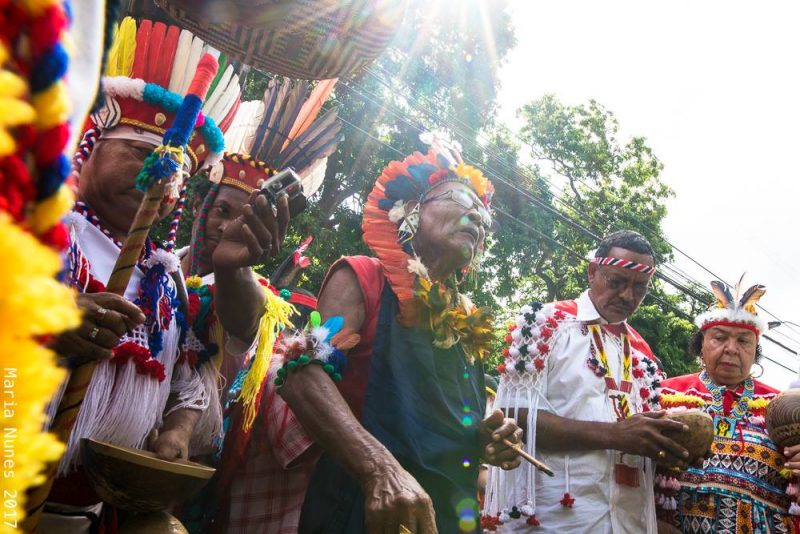 There has been a fair amount of debate over whether or not statuary of Christopher Columbus should be removed. Some feel that it glorifies the country's colonial past, while others — including a sculptor who is a First Peoples descendant — view it as a legitimate part of history. Facebook user Flloyd Hernandez attempted to bridge the gap:

In defense of the continued presence of Columbus’ statue in this country, some people are saying that good bad or indifferent, Columbus is part of our history and shouldn't be erased.
Erasing history is not the issue. Columbus can never be erased from our history, but there is no reason to celebrate or honour him. […]
If Columbus must be actively and accurately portrayed, it has to be as a monument to murder, rape and genocide. None of that horror is reflected in this statue that they so cherish.

Either way, many Facebook users expressed the hope that this would be “more than just another holiday” and that it would help put issues important to the indigenous community higher on the national agenda. Elspeth Duncan, who is part Carib, said:

Rather than just being a one-off holiday for people to lime and sleep late, how about an annual one to kick off or end a week where there are workshops, educational opportunities and experiences for the public to learn more about the first people. If we returned to their way of living, we could learn a lot about being more in harmony with Nature and ourselves.

Being into Native American Indians and their ceremonies, wisdom, music, jewelry, etc is very trendy all over the world—including here. What about our own indigenous people's ceremonies, dress, culture, music, customs, wisdom? Do we know much, if anything about it? I like to think that at least I have some of it in my DNA (as do others of us born in Trinidad)—ancient wisdom encoded in who we are, accessible at the tap of our third eye/intuition—like an inbuilt Google of age-old consciousness. 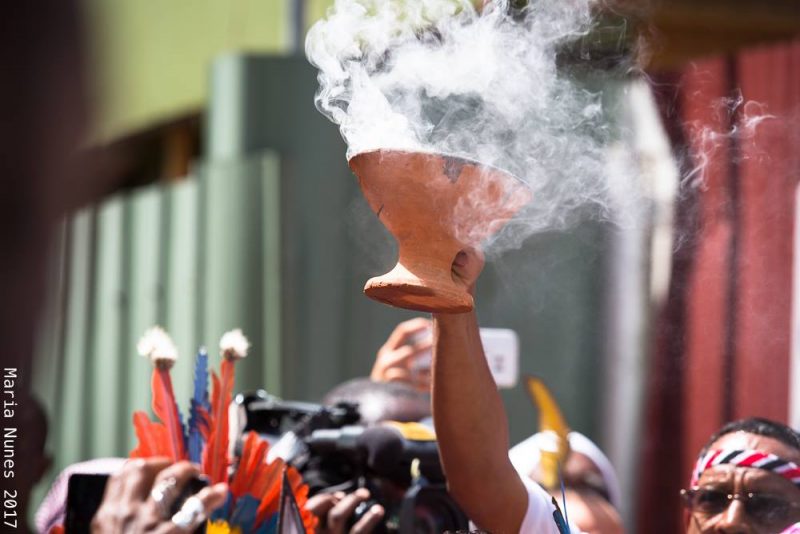 Part of the First Peoples parade and ceremony outside The Red House on October 12, 2017. Photo by Maria Nunes, all rights reserved, used with permission.

Netizens also discussed the significance of the holiday on Twitter:

The significance of indigenous people should never be underestimated or overlooked. #Trinidad #Arima #FirstPeoples pic.twitter.com/ZwcoTgUHQx

Even the Ministry of Public Administration and Communications mused:

A journey of discovery, a story to be remembered… Today we celebrate and recognise the First Peoples of Trinidad and Tobago. pic.twitter.com/tg8cS4dPLQ

Many will be looking to see whether this recognition will be sustained past October 13, 2017.