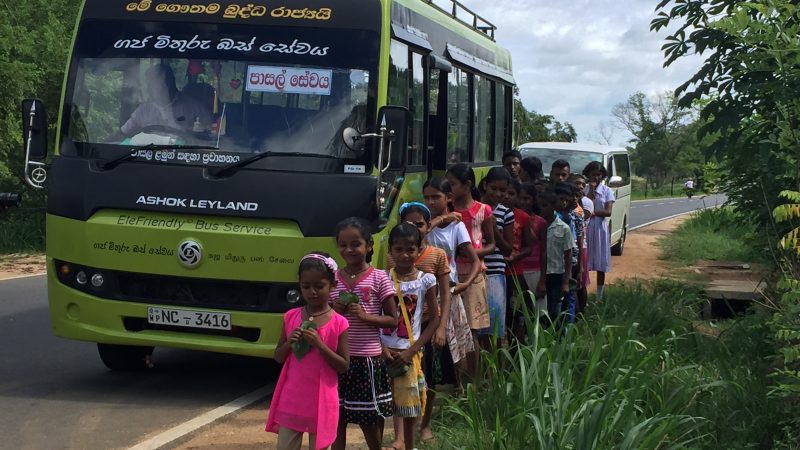 This post by Anya De Saram-Larssen, a student of the British School in Colombo, appeared in Groundviews, an award-winning citizen journalism website in Sri Lanka. Ms. Saram-Larssen attended the anniversary of the launch of the EleFriendly Bus and talked with different stakeholders. An edited version is published below as part of a content-sharing agreement with Global Voices.

The EleFriendly Bus celebrated its first birthday on September 9 in the Wasgamuwa area of Sri Lanka. The bus is an innovative project developed by the Sri Lanka Wildlife Conservation Society (SLWCS) to mitigate the human-elephant conflict (HEC).

The conflict between humans and elephants has grown in Sri Lanka as elephant habitats shrink and humans slowly encroach upon spaces where elephants roam. Elephants, having nowhere else to go, end up raiding crops in farmlands and human habitats in search of food and become aggressive in encounters with retaliatory humans. This cycle of resistance, fear and contested space has led to violence.

Each year in Sri Lanka, elephants kill approximately 50 people and then face a fatal consequence as villagers shoot, poison or electrocute them out of fear or self-defense. Between 100 to 150 elephants are killed yearly and statistics show that the potential for conflict is highest when humans walk in spaces where elephants normally roam.

The Sri Lankan government has focused on broad-scale measures to mitigate HEC such as fencing or relocating elephants or producing ‘mass-drives’ to steer elephants away from human activity. However, these strategies do not recognize HEC at the local level and the Elefriendly Bus was developed to address this.

Since last year, the EleFriendly Bus runs daily to provide children with free and safe transportation to and from school, keeping them out of elephants’ corridors. Adults also use the bus to go to and from work for a nominal fee. An average of 191 people use the bus on a daily basis and about 72 are children.

The bus route travels through the ‘elephant corridor’ in villages in the central province including Himbiliyakada, Iriyagasulpotha and Weheragalagama, where elephants frequently roam and potential HEC remains high. Located along the southern boundary of Wasgamuwa National Park in a protected forest preserve area, human sometimes frequent the area and encounter elephants on-route in search of forest resources and water outside the park.

Saram-Larssen, a 12-year-old student at the British School in Colombo, produced an informational video detailing fundraising efforts to launch the bus last year. Holding a bake sale at the British School, she and her team were able to raise 127,484 Rupees (approximately 834 USD) toward the Elefriendly Bus, which cost approximately 35,000 USD total with fees including an operating permit and permission to charge a fare from commuters on public roads:

Recent SLWCS statistics show that HEC has reduced by 80% since the bus started running. In the first seven months, the number of conflicts fell from 83 to 21.

According to Harshini, a 13-year-old who lives in Pussellayaya, the bus has dramatically improved her school commute because she no longer has to walk five kilometers a day. Harshini often missed school because of the heavy rains and the danger from elephants, but now rarely misses a day because she feels safe traveling on the bus.

Children stated that the bus helped not only with protection against elephants but also with HEC education. The 24-passenger bus is full of colorful images and educational messages about elephant conservation and wildlife. Menaka, 8 and Chathurika, 11, from Himbiliykada, say they love riding the Elefriendly Bus because they have so much fun learning together while riding to and from school. 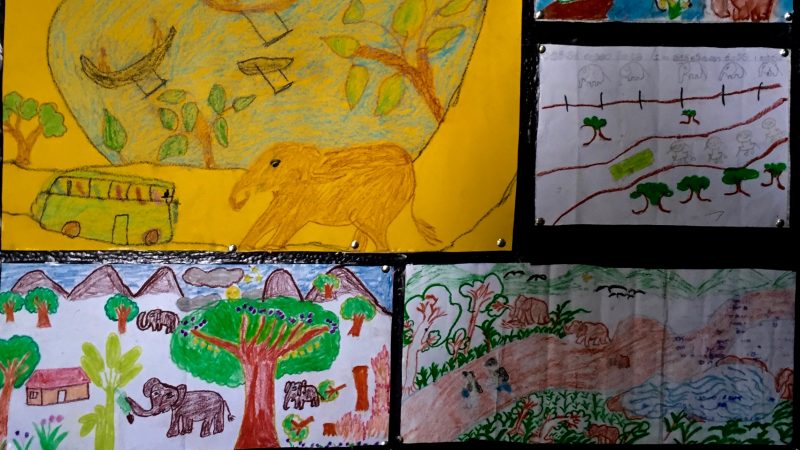 Above are images submitted into the EleFriendly Bus arts competition,  courtesy Groundviews.

As part of the Elefriendly Bus launch and celebration, the SLWLCS held an art and an essay competition. Most submissions featured harmony between elephants and the villagers, as well as the seriousness of HEC, including the fear many children have toward elephants.

One painting showed a man being trampled by an elephant and another showed a farmer being chased.

SLWCS president Mr. Ravi Corea says the organization hopes to transform these negative perceptions by educating children on the importance of their environment and the need to protect all inhabitants. 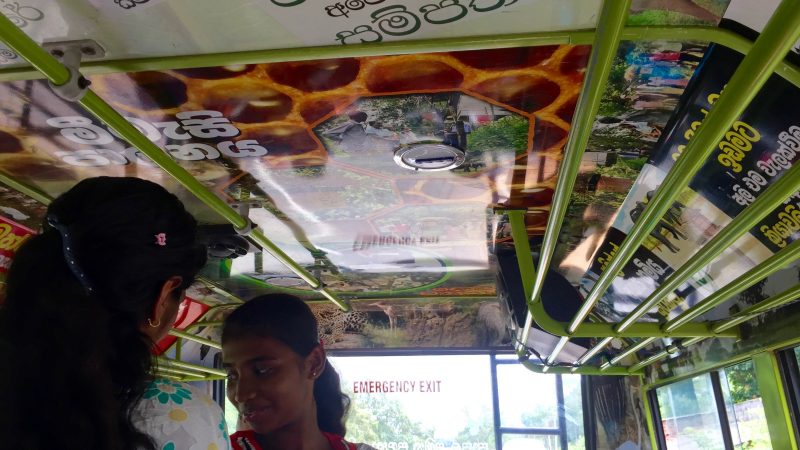 The bus belongs to the community, Mr. Corea explained:

We own the bus but it is operated by a driver and conductor from the village. Also, the money collected from tickets is used by the community to take care of the bus.

The SLWCS plans to add another bus in Wasgamuwa and also introduce EleFriendly busses to other areas in Sri Lanka where HEC persists.

the bus allows children to attend school more regularly, while at the same time keeping the elephants safe.

Judging by the perfect condition of the bright green EleFriendly bus, the villagers have taken pride in this initiative and are working to transform negative attitudes toward elephants.

In turn, elephants can now roam more freely, foraging and socializing in harmony with nature as they have done for centuries.