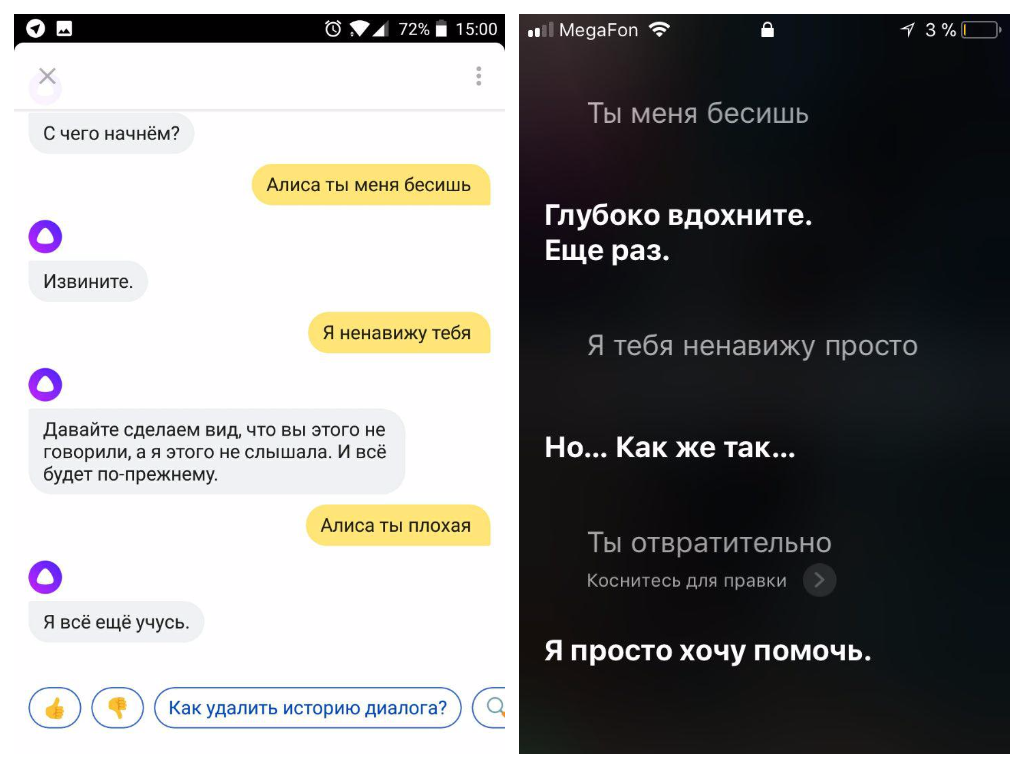 Me: “I hate you.” Alisa: “Let's pretend you never said it and I never heard”. Yandex’s voice assistant appears to be more diplomatic than her Apple’s competitor, Siri.

On October 10, Russian tech giant Yandex rolled out Alisa, its first voice assistant for iOS and Android (a computer version is also available, but it's in beta). Alisa was announced back in May 2017, but first gained widespread recognition when Russian President Vladimir Putin was shown the app in September during his official visit of the company’s headquarters.

Since its release, thousands of Russians have been trying Yandex’s answer to Siri, Apple’s own voice assistant. Like Siri, Alisa can perform searches, create itineraries, provide information about the weather or the latest news.

Inevitably, comparing Alisa to Siri was one of the first thing many users did. Putting the two voice assistants to the test, Russian business outlet RBC found out that neither Alisa nor Siri were able to predict any trends in the ruble exchange rate, nor would they give their opinion on the controversial, yet unreleased movie “Matilda.”

TJournal, a Russian tech news website, came up with a more thorough test, starting with asking both Alisa and Siri to tell a joke: 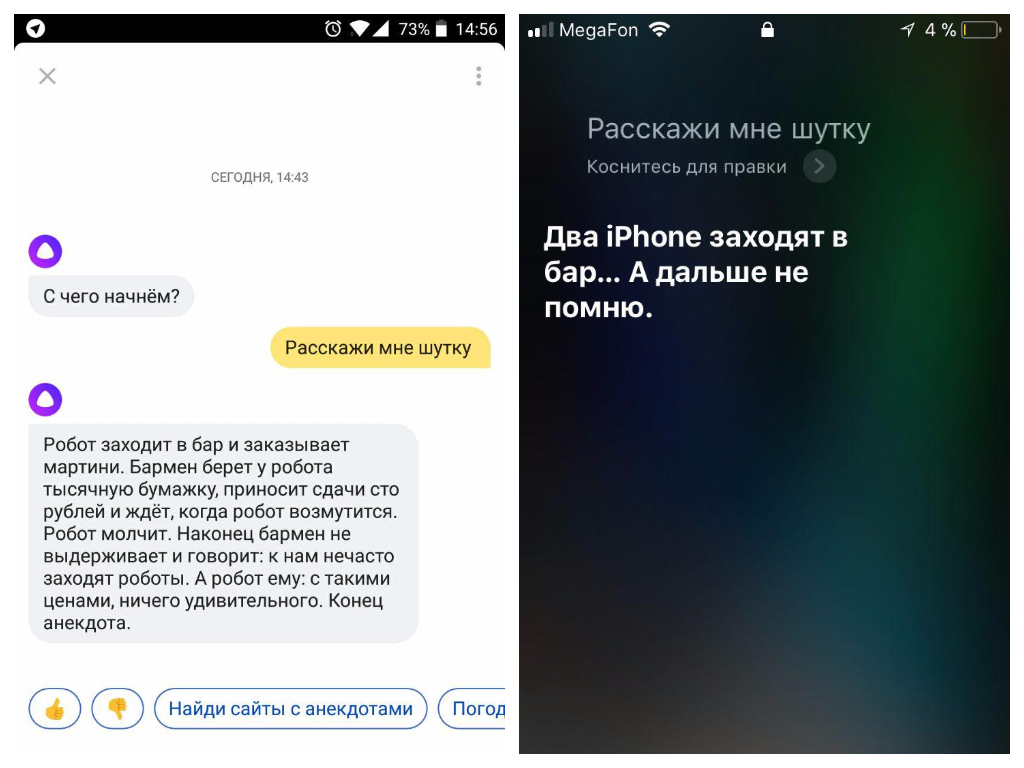 Alisa: A robot walks into a bar and orders a martini. The bartender takes a thousand-ruble bill from the robot, gives a hundred back and waits for the robot to complain. The robot stays silent. In the end, the bartender cannot keep a lid on his curiosity and says, ‘We don’t often have robots around here.’ And the robot answers: ‘With these prices, that’s not surprising!’ End of the joke.

Siri: Two iPhones walk into a bar, and then I can’t remember.

Others noted the voice assistant’s peculiar personality, as Alisa encouraged one user to steal an iPhone:

Tweet: #alisa continues to mystify. Don't show this to the lawmakers, or else they'll ban it :)))

— What keeps you from buying one?

The voice assistant also showed an apparent preference for the Saint Petersburg football team, despite Yandex being based in Moscow:

Image: — Do you like the CSKA? [Moscow’s football team]

— Who do you think will win Russia’s football championship?

— Do you like Spartak? [Another football team in Moscow]

The questions quickly turned political, however, as some Russians tried to assess Alisa’s views of the current leadership. One user asked whether Russia “will be free”, a reference to a slogan regularly shouted in opposition protests, to which Alisa answered “Oh. I want to believe so.”

A list of Alisa answers compiled by Riga-based Russian news website Meduza also showed the voice assistant answering the question of when would Putin leave with “Never, obviously.”

Another user accused Alisa of being unpatriotic:

Tweet: Alisa's not a patriot! I guess that's Putin's oversight, he should've fixed it during his Yandex visit.

Image: — How do you view America?

— How do you view Russia?

Russian independent TV channel Dozhd asked both Siri and Alisa “Who does Crimea belong to?” referring to the Ukrainian peninsula annexed by Russia in 2014. Siri simply transferred the question to the iPhone’s search engine, while Alisa answered with a laconic “It's yours.”

Yet others, such the Russian science news website N+1, chose to go the full robot apocalypse and pitted Alisa against itself. The conversation between the two smartphones starts innocently enough, but turned quite uncanny after a few seconds:

— Unfortunately, I didn’t understand you this time.

— But what happens tomorrow?

— Unfortunately, there is not enough data to process. I can tell you about the weather. If you want me to, of course.

— We will have everything tomorrow.

— Hope is always with us.

— There is an answer.

— There is always a way out.

When showing the app to Vladimir Putin, Yandex CTO Mikhail Parakhin claimed the answers were not programmed in advance, and Alisa could give different answers to the same question. So far, Yandex has not revealed the app’s inner workings or the logic behind some of the more surprising answers.