‘Are We Still in the Stone Age?’ Cambodians Express Disappointment as Government Bans ‘Kingsman’ Movie Sequel 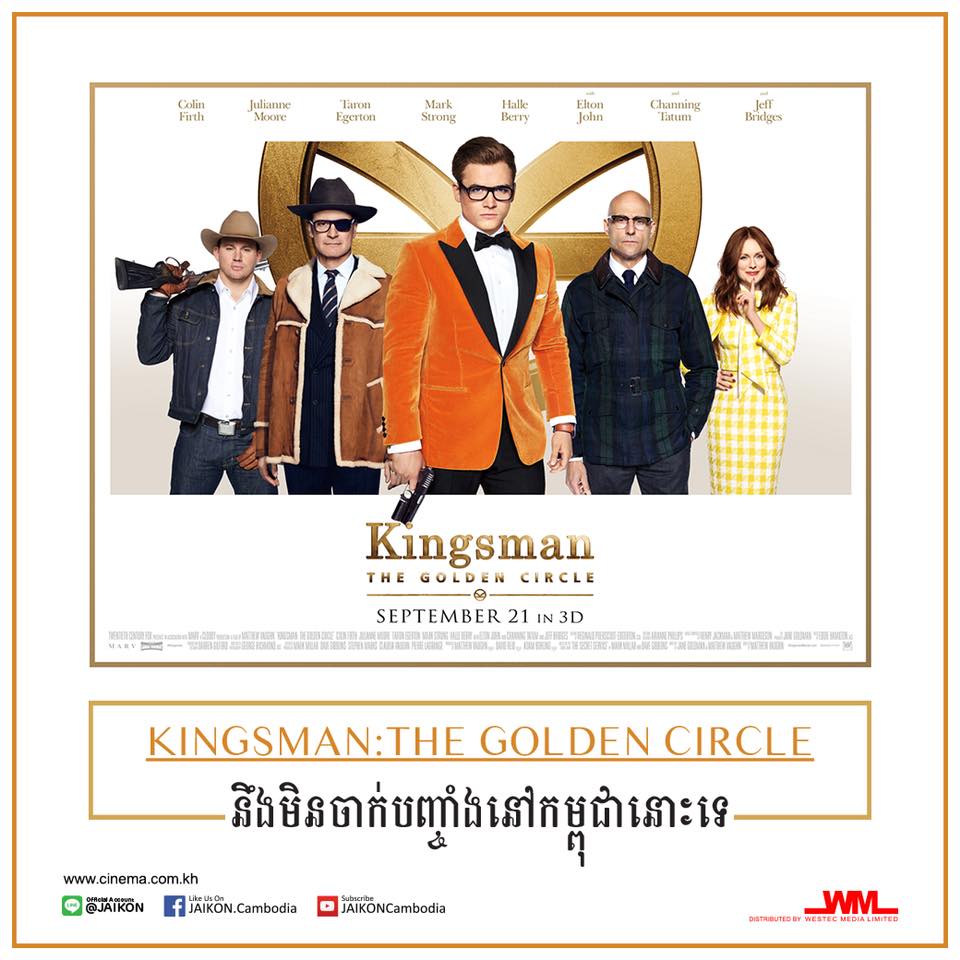 ‘Kingsman’ film poster and an announcement from a local cinema: “Due to widespread disapproval of scenes in the movie, ‘Kingsman: The Golden Circle’ will not be shown in the cinemas. With this news, we sincerely apologize.” Source: Facebook

The Cambodian government has banned the public screening of the Hollywood movie “Kingsman: The Golden Circle” for depicting a Khmer temple as the secret base of a criminal drug lord.

The movie is a sequel of the 2014 action comedy film about a British secret spy organization.

Bok Borak, deputy director of the Ministry of Culture and Fine Arts’ Film Department, explained the reason for the ban:

After we reviewed the film we found some problems. They used the Cambodian land – the temple – as the place where the terrorists stay and make trouble for the world.

The temple was not identified in the film but it resembled Ta Prohm, which was also used as a location in the 2001 Hollywood movie “Tomb Raider” featuring actress Angelina Jolie.

Simon Choo of Westec Media, which is in charge of distributing the film, pointed out that reference to Cambodia was even blocked from the film to please the country’s censorship board:

We even blocked the name Cambodia and the name does not appear anywhere. Every movie cannot be depicting Cambodia as heaven . . . You need to face the reality that all countries have criminals.

As expected, Cambodian moviegoers expressed disappointment over the decision to ban the film. Facebook user Singhtararith Chea wrote on his page: “Are we still in the Stone Age era?”

Also on Facebook, Somchanrith Chap reminded censors that the film is fictional:

I've seen New York City destroyed a thousand times by bad guys and aliens but nobody cares because it is FICTIONAL.

He also found it unusual that the board described the depiction of the Ta Prohm temple in the film “Tomb Raider” as “romantic”:

In case you didn't notice, nothing about stealing is romantic nor using Cambodians as slaves to break down an ancient temple entrance. But nobody cares. Why? Because it's fictional. Get over it.

This is ludicrous, I can't believe these so-called experts could not distinguish between fiction and reality.

To my dear experts! I just wanted to inform you that creativity is boundaryless, and this film is one form of its multiple-realities, multiforms, and multilayers. You should start learning how to recognize it, although, you do not like it by recognizing it you respect the freedom of expression of the others — in this case, the creator of the film.

Twitter user Peter Ford used the hashtag #hunsanity which is a reference to Prime Minister Hun Sen, the country's leader in the past three decades:

Cambodia has previously censored Hollywood films depicting excessive violence or sexuality like the film “Fifty Shades of Grey,” but this is the first time in recent years that the government has banned a film for its “negative portrayal” of the country.

The film ban also highlighted the government's crackdown on free expression. Since September 2017, more than 30 radio stations have been closed down by the government over licensing and tax issues. An English daily was also forced to close operations after the government slapped it with a hefty tax bill.