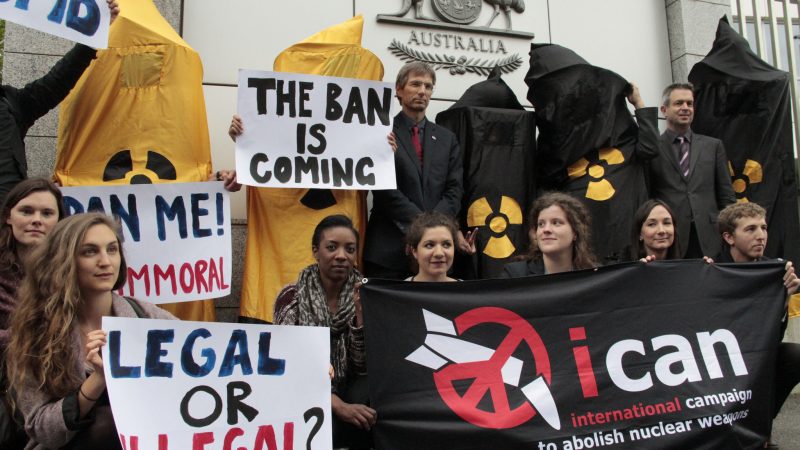 ICAN campaigners protest outside Australia's permanent mission to the UN at Geneva 12 May 2016 – Courtesy ICAN Flickr account (CC BY 2.0)

Awarding the 2017 Nobel Peace Prize to ICAN [2], the International Campaign to Abolish Nuclear Weapons, surprised many, including Australians unaware of ICAN's work or humble origins in Melbourne in 2007. Critics also noted that Australia itself hasn't yet signed the test-ban treaty pushed by ICAN.

The Norwegian-based Nobel committee [3] chose ICAN “for its work to draw attention to the catastrophic humanitarian consequences of any use of nuclear weapons and for its ground-breaking efforts to achieve a treaty-based prohibition of such weapons.”

New Zealand neighbors were happy to take some of the credit:

The online Australian newspaper The New Daily [10] was quick to explain the role of ICAN's anti-nuclear campaign @nuclearban [11] in the adoption of the United Nations Treaty [12]on the Prohibition of Nuclear Weapons in July this year:

ICAN had campaigned tirelessly for a treaty, especially at the UN Open-Ended Working Group in Geneva after its formation in 2015.

However, some saw ICAN's win as tokenistic:

They threw alot of expensive parties, and people with no power to do anything signed some papers …. and not a single nuke was “abolished”

Although 122 nations voted for the treaty, none of the nuclear weapons states were among them. The Australian government will not sign the treaty despite pressure to do so. Paul Barratt, a former top Australian public servant, tweeted:

Australia delegates to the disarmament negotiations have been accused of being “weasels. [23]” Guardian Australia cartoonist First Dog on the Moon took up this idea after the Nobel Prize announcement:

They give Nobel prizes to weasels now? No they do not. BUT WHAT IF THEY DID? https://t.co/cOM5XOa9kr [24]

Some down under even called for a ‘reality check':

What have they done exactly? North Korea and soon Iran with Nukes, ICAN has failed surely! Can we get Obama's back when Iran starts testing?

State Premier Daniel Andrews of Victoria, in which Melbourne is the capital city, took to Facebook [27] to promote ICAN's achievement:

An incredible thing happened to a Victorian-founded organisation on the weekend. It won the Nobel Peace Prize – and it hasn't got nearly enough the attention it deserves. Please fix that. Tag and share. Let everyone know what we're capable of in this daring, progressive little state at the bottom of the world.

But citizens like Cathy Micich rebuked [28]: “So what role did Daniel Andrews play? Oh, that's right, jump on the bandwagon.”

Medact, a United Kingdom-based ICAN partner, reminds the world that ICAN has a long way to go in achieving its objective to ban all nuclear weapons:

ICAN [35] concurs. Though it was founded in Melbourne, it shifted its global headquarters to Geneva, Switzerland since 2011 to be in close proximity to where the United Nations coordinates its disarmament talks.