Art Exhibitions Fall Into the Crosshairs of Brazilian Conservatives 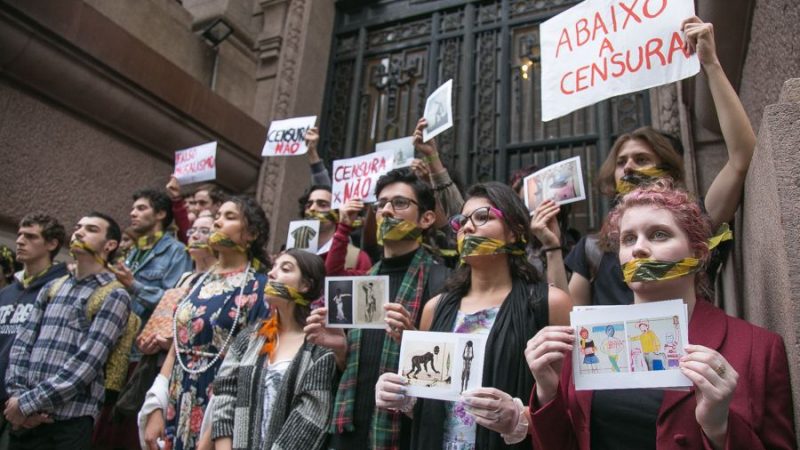 Activists protest against censorship in front of Santander Cultural, after it caved in to pressure from conservatives and cancelled the exhibition about sexual diversity. Photo: Sul 21, published with permission.

Two art exhibitions were the target of conservative groups’ anger in September in Brazil, sparking a heated debate on social media over artistic freedom and censorship.

First, the exhibition “Queermuseum – Mapping Difference in Brazilian Art”, about gender and sexual diversity, was cancelled abruptly on 10 September after pressure from right-wing groups which accused the artists of promoting paedophilia, bestiality, pornography and blasphemy against religious symbols.

The groups organized protests at Santander bank's cultural centre in Porto Alegre, where the exhibition  was held. Bank branches were also graffitied and pelted with stones.

Weeks later, the criticisms turned to the Museum of Modern Art in São Paulo after a video of the performance “La Bête” went viral, in which choreographer Wagner Schwartz let the public manipulate his naked body. The images show a child and mother playing with the hands and feet of the artist.

A crowd of people protested in front of the Museum of Modern Art on 29 and 30 September, and there were reports of attacks against employees and visitors of the museum which, in contrast to Santander in Porto Alegre, did not cancel the exhibition “Brasil em Multiplicação” – Schwartz’s performance was held during its opening on 26 September.

The campaigns targeting both exhibitions were headed by websites and Facebook pages linked to religious and conservative movements, in particular Movimento Brasil Livre (Free Brazil Movement), which was at the forefront of the demonstrations in 2015 calling for the impeachment of ex-President Dilma Rousseff.

Despite having described itself as a liberal movement – which in Latin America mainly means defending minimal government – MBL has consistently taken conservative stances, for example positioning itself against the legalization of abortion or education policies regarding gender in school.

Santander released an official statement justifying the cancellation of the Queermuseum exhibition:

[…] we listened to the demonstrations and understood that some of the works of the Queermuseum exhibition disrespected symbols, beliefs and people, which is not in line with our worldview. When art is not able to generate inclusion and positive reflection, it loses its primary purpose, which is to elevate the human condition. 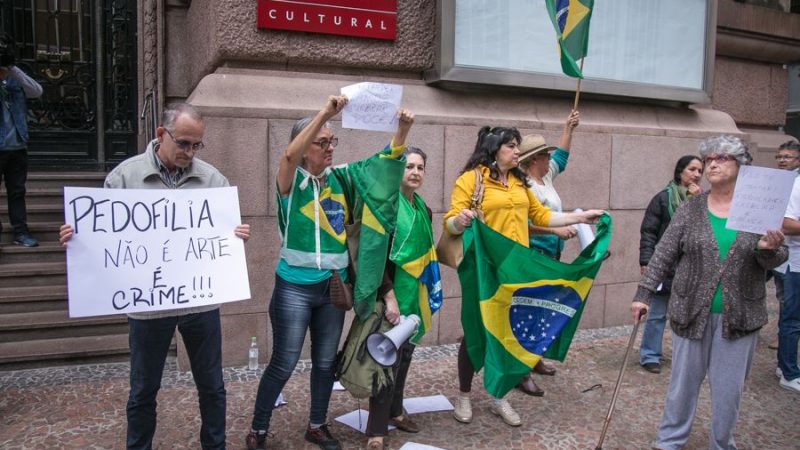 According to the Museum of Modern Art's official statement, the performance “La Bête” took place in a labeled room, indicating the presence of artistic nudity:

The museum reiterates that the child appearing in the video posted by others was a visitor and was accompanied and supervised by their mother and that the references to inadequacies in the situation are the result of disinformation, misrepresentation of the context and of the work’s meaning.

The debate reached such a scale that right-wing politicians also decided to support a boycott – such as the mayor of São Paulo, João Dória, elected in 2016 with support from the Free Brazil Movement, who in a video called the performance “libidinous”.

In the country's capital Brasilia on 3 October, members of the Chamber of Deputies expressed their views on the controversy, with some openly defending the idea of torturing Schwartz. A deputy from the Republican Party, Laerte Bessa, who is a former police marshal, stated in the assembly:

I wonder if he is aware of human rights? Human rights are a beating stick of guatambu wood that people used for many years in police stations. If he knows “tatu’s tails” [used for whipping prisoners], which we also used in the good old days in police stations. If that hobo was going to hold that exhibition […] he would have to take such a beating that he would not want to be an artist anymore and would never again bathe naked.

The situation has given progressives in Brazil reason to worry; they see support for their side waning against the rise of conservative forces on social media, in the streets and in formal politics. 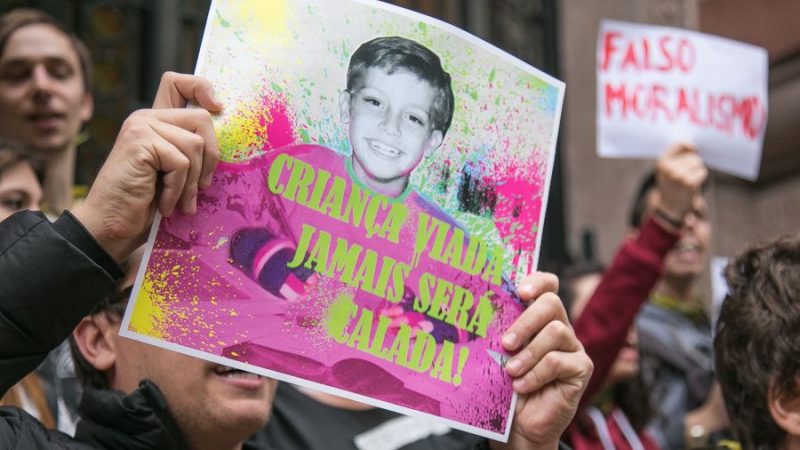 Sign referring to the work “Criança Viada”, one of the most attacked by those opposed to the exhibition “Queermuseu”. Photo: Sul21, published with permission.

Among the 263 works of the Queermuseum exhibition, running since 24 August, were the creations of contemporary artists Adriana Varejão and Bia Leite, who are regularly attacked online.

Varejão’s painting “Scenes from the Inside II”, done in 1994, portrays different sex scenes between Japanese characters, black and white men, and a goat. In an interview with the newspaper Zero Hour, the artist stated:

The artwork of Bia Leite, which was accused of inciting paedophilia, was inspired by “Criança Viada“, a Tumblr page that was hugely popular in Brazil between 2012 and 2014 where internet users were invited to send photos from their own childhood in which they adopted queer gestures.

In the same story, the artist defended her work:

We, LGBT people, were children. This fact is difficult for some because we never became LGBT, we always were. Everybody must care for children, and not repress their identity or way of being in the world. This is very serious. I am totally against paedophilia and the psychological abuse of children. The objective of the work is exactly the opposite, it is so that these children have their existences respected.

In interview with Vice Brazil, Queermuseum curator Gaudêncio Fidélis said the Free Brazil Movement (MBL), which has around 2.4 million Facebook followers, played a decisive role in its cancellation:

MBL and, then, all the factions of the extreme-right and radical conservatives which are taking on this crusade against the exhibition, now enter the world of art in a very specific and focused way. It could become a routine in our lives from now on.

And in an interview with local news site Sul 21, Fidélis spoke about the unusual character of the cancellation:

It is important to remember the seriousness of what we are experiencing. For the first time, in the history of Brazilian art and of exhibitions of fine arts, we have an exhibition closed. Not even in the period of the dictatorship was an exhibition with 263 works by 85 artists closed.

Artist Vitz Vika, who was at the exhibition's inauguration on 15 August, wrote a Facebook post in support of it:

The cancellation of this incredible exhibition #QueerMuseum only show us how revolutionary it was, even if it was short-lived. This prejudiced and conservative resistance, which we saw in recent days, is the proof of this in our hypocritical and ignorant society. It will make us stronger. We will be more united. And we will continue our battle for respect. #LGBTArt #DesordremeRegresso [#DisorderAndRegress, a play on the words “order and progress” on Brazil's flag]

Pablo Ortellado, a professor at the University of São Paulo, stated in a column in the newspaper Folha de S. Paulo:

The right took advantage of the great disconnect of the public from fine art – who do not understand the paths of the formal development of the language – to take the work out of its context and transform an innocuous performance into a deceitful apology of paedophilia. […] These political actors are not champions of family morality – they are using the sensitivity of Brazilians about the sexual abuse of children to make a campaign against the left, which would open space for its hidden agenda of diminishing the state and reducing funding of schools and hospitals.

Artists, curators and gallery owners rallied in front of the Museum of Modern Art (MAM) on 2 October and also published a public letter in support of the exhibition. On social media, others showed solidarity using the hashtag #SomosTodosMAM (#WeAreAllMAM).

In Porto Alegre, LGBT activists also protested against the closing of Queermuseum exhibition, defending it as a way to increase the visibility of gender minorities and respect for diversity. People in favour of the cancellation also protested their side.

In São Paulo, the public prosecutor opened an investigation to find if there had been a violation of the Statute of the Child and the Adolescent (ECA) by the Museum of Modern Art, the artist or the child’s mother. In Porto Alegre, on the other hand, the accusation of paedophilia was rejected by authorities.