To Fight Against Smog, China Bans Coal in 28 Cities 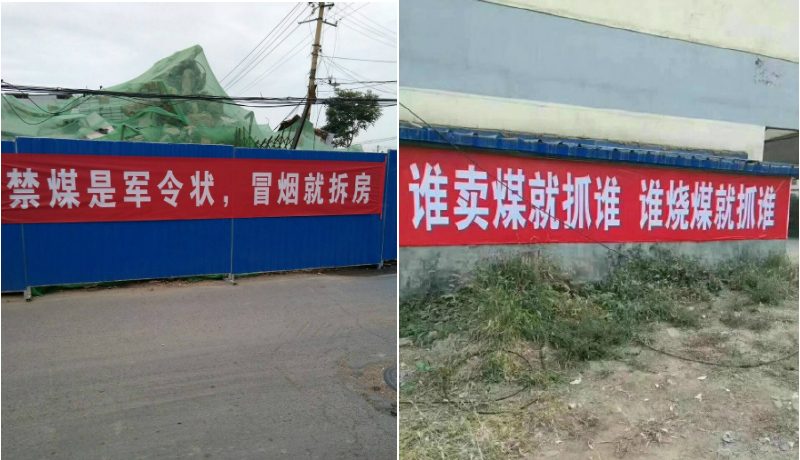 The slogans say: “Coal Ban is military order, see the smoke and the house will be torn down” and “Arrest whoever sells coal”. From Weibo.

As winter approaches, Beijing is gearing up to fight against smog, and a large number of cities in northern China have issued a ban on coal.

Different from the previous efforts coordinated by the Ministry of Environmental Protection in past years, the Coal Ban, as it is being called, has become an economic policy supervised by a coalition of top authorities. Concrete targets on air quality level — and the number of coal-free districts — have been handed down to 28 cities in northern China.

In the past few years, China has been seriously affected by air pollution — especially in winter — with major cities in northern China recording pollutants, or PM 2.5, in the air from 300 to 1,000 micrograms per cubic meter (µg/m³). Such high levels of pollutants are hazardous to human health and can cause lung disease, emphysema, lung cancer, or premature death in people with existing heart or lung conditions.

Last week, Taiyuan, the capital of Shanxi province — the heart of China’s coal production — was one of the areas to issue the Coal Ban. The announcement is considered a symbolic act of showing Beijing’s determination in cutting coal consumption.

Soon after the 28 cities were listed, the Coal Ban turned into a campaign, with banners and slogans strategically positioned for people to see.

Street and village committees from the coal-free districts mobilized themselves in order to ensure that residents have shifted to clean energy sources.

While people love blue sky, many are also worried that those who cannot afford clean energy would freeze to death this winter. In Weibo, some urged the authorities to slow down in the implementation of the Coal Ban:

[Chen Anshi: the Coal Ban policy in Handan city [of Hebei province] is good, but please take it steadily] To tackle the problem of air pollution, Handan city in Hebei has decided to ban coal in most parts of the city. This is a good policy in alignment with the pollution law and people’s expectation for blue sky and clean water. But the implementation is a bit hasty. The wish of the leaders to transform the backward and highly polluted production is good, but it can’t be changed overnight. For example, currently the use of coal for electricity is the main source of energy, without alternative clean energy source, can you even product enough electricity supply? On the other hand, if we ban ordinary people from using coal, [people would ask] why don’t you ban coal-generated electricity?

Recently, in order to meet the environmental target, Xingtai city [of Hebei province] started the Coal Ban campaign. It is a good move. But in villages, there are still many elderly people who live by themselves and they don’t know how to use natural gas or electric devices for cooking. Accidents may happen [if we force them to use these alternatives]. What should we do? I hope the authorities of Xingtai can consider the practical problem and be human-oriented in the implementation of the policy so as to protect the interest of marginal social groups, like the elderly in the village.

The idea of coal-free districts was initially introduced in 2011 targeted at cutting coal consumption in the capital, Beijing. A more concrete and comprehensive action plan was put forward in 2013, which identified Beijing-Tianjin-Hebei as the most stringently targeted region for air quality control. It set the target that Beijing’s annual average concentration of hazardous particles, PM2.5 (Particulate Matter, 2.5 micrometers or less), should be controlled at a level of 60ug/m3 (microgram/cubic meter).

As anticipated, the plan has met with resistance, as Hebei is China’s steel hub and heavy industry relies mainly on coal as an energy source.

In August 2017, the Ministry of Environmental Protection geared up its action plan and published a battle plan against smog. In addition to Beijing and Tianjin, 26 other cities in the provinces of Hebei, Shanxi, Shandong and Henan, were listed for setting up coal-free districts. But the ministry also admitted difficulties in meeting the 2017 target.

However, the cutting of coal consumption is not just an environmental campaign; it has also become an economic development and planning issue.

In September 2017, a top-level policy coalition of the Ministry of Housing and Urban Development, National Development and Reform Committee, Ministry of Finance and Energy published a supervision guideline demanding that the leader of the 28 cities speed up the establishment of coal-free districts to adhere to the 2017 air quality standard.

Taiyuan, China’s coal hub, has taken action in banning coal accordingly. As the richest city in Shanxi, Taiyuan would not suffer too much from the Coal Ban, but other coal-mining cities in Shanxi — including Jincheng, where the majority of residents rely on coal for warming their homes — reacted to the ban with greater resentment. In a Jincheng chatroom, people said:

Those residents who don't have gas warming systems at home have to move to the city government buildings in winter. The government would have to take care of them. If they don't, they want people to be frozen to death.

It is good to freeze the poor to death. The remaining rich ones would become the officials and they can build an advanced rich country with the capitalists.

Although some local governments have provided subsidies for the residents to shift to clean energy, some are skeptical:

An electric heater costs RMB 7,000 [US $1052] and the government subsidies the manufacturer RMB 5,000 [US $751]; the household has to pay RMB 2,000 [US $301]. The government will subsidy three months’ electricity fee; whether the subsidies will continue next year is unclear…