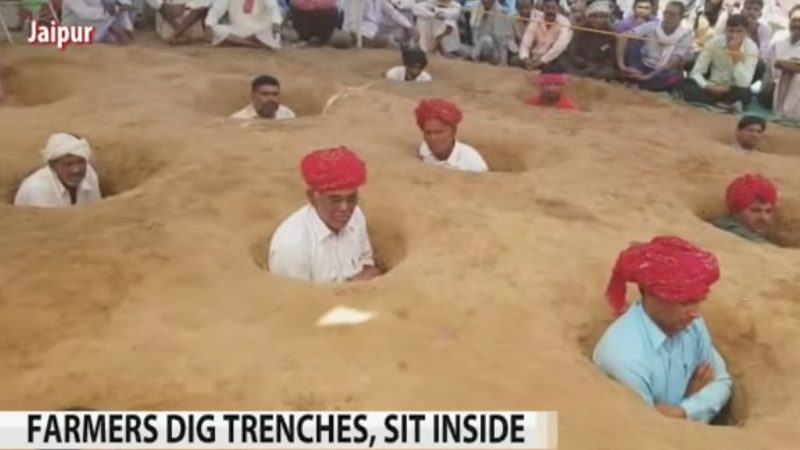 Since October 2, 2017, more than 50 farmers in Jaipur, in the northwestern Indian state of Rajasthan, have launched an innovative protest, taking turns to sit in pits buried up to their waist in mud.

The protesters accuse the state government of forcibly acquiring their land, after providing them inadequate compensation. They want the current acquisition to be stopped, a fresh survey conducted and the compensation and acquisition be set as per the new Land Acquisition Act 2013 promulgated on 01 January 2014.

Before undertaking the current “dirty” protest, which they call the “Zameen Samadhi Satyagraha” (burial satyagraha, a form of non-violent resistance), the farmers had staged a sit-in for 14 days, but received no response from the government.

They have holed up 40 pits and a few trenches. Among the 54 individuals from all age groups shuffling to sit in the pits, several are women including 90-year-old Nanthi Bai.

The land in dispute is in Nindar village near Jaipur, which is part of the 330 hectares (1,300 bigha) the state government had earmarked in 2010 for the Ninder project consisting of 10,000 houses. The houses will be available for lower-income groups, “economically weaker sections,” and the middle-class group.

Since acquisitions of the land for the project began in 2010, Jaipur locals have been protesting in various ways. So far, the Jaipur Development Authority, which is implementing the project, has acquired 150 hectares from the village; the farmers want to block acquisition of the rest. The Jaipur Development Authority has deposited 600 million Indian rupees (9.2 million US dollars) in a local court for some of the lands. The protesting farmers claim that the rates date back to 2010 as compensation and the current market price is much higher. Approximately 5,000 families, including farmers, will be affected by the acquisition.

The government should acquire land of farmers as per new Land Acquisition, Rehabilitation, and Resettlement Act. It's clearly mentioned, that government cannot acquire land if consent from 80% farmers is not given.

In India, 1.3 billion people live with a population density of 445 persons per square kilometer. So land is the scarcest resource in the country. India's British colonial era Land Acquisition Act, 1894 did not give enough protection to the victims of land acquisition. The new land acquisition act 2013 promises:

1) Increased compensation for farmers – market prices are updated
2) Expanded coverage – non-owners facing loss of livelihood are compensated
3) Rehabilitation and resettlement made compulsory
4) Taking informed consent of land-losers – 80% for private projects
5) The requirement of social impact assessments to determine a project's impact on people's lands and livelihoods; more specifically, to identify all affected people.

Raj Kumar, deputy commissioner of the Jaipur Development Authority, however, has told media that the land acquisition process was started in 2010 and the deal was finalized after proper compensation in May 2013. The government has even said that people with “vested interests” are behind the agitation.

The farmers say that their plights are not heard. Indian expat Kazim Ahmed expressed his dissatisfaction on Facebook that the Indian media is not doing enough to highlight the victims plights:

This has been an international news, what has Indian media done other than just reporting? No national television debates, rather we are being deflected by other minor issues!

For whatever it's worth, former chief minister of Rajasthan Ashok Gehlot tweeted about the case:

It is agonising to see how #farmers in #Ninder are agitating burying their bodies,inside the mud. #Rajasthan pic.twitter.com/cbtmC0MeJ2

These #farmers are not begging for favours or asking for alms, they are demanding what is their genuine right. #Rajasthan

Farmers & their families in Rajasthan burying themselves in mud protesting against govt acquisition of their land. 17th day today. pic.twitter.com/f1T7aE7PUs

It remains to be seen if this protest brings the attention that the participants are hoping for.