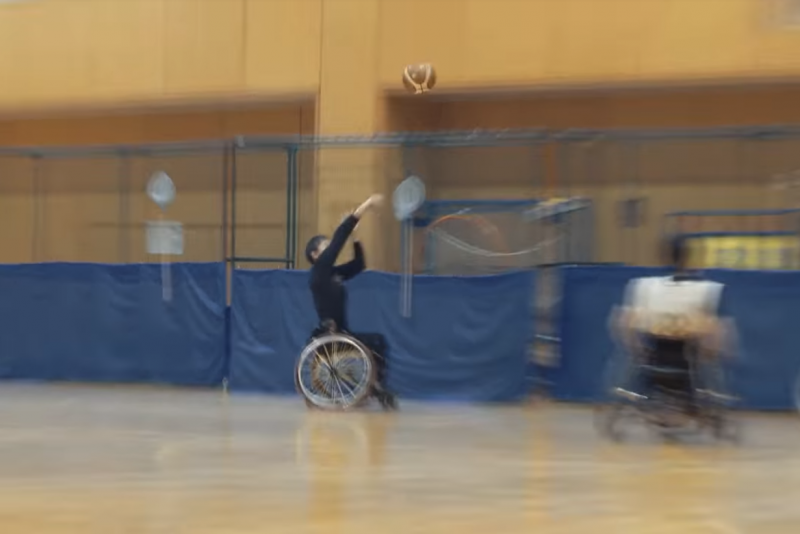 “Ryuga Akaishi, 15, is a Wheelchair Basketball Player from Japan, the youngest member of the Saitama Lions sitting basketball team in Tokyo.” Screencap from Olympic Channel [1] (YouTube).

Last year I commented on Japan’s poor showing [2] at the Rio de Janeiro Paralympics. While the Japanese Paralympic team won 10 silver and 14 bronze, which is no small feat, Rio 2016 was the first time since the Paralympics were officially recognized as a sporting event in 1960 that the Japanese Paralympic Team did not win a single gold medal. So, the pressure is on for Tokyo 2020. Speaking last year, Tokyo Governor Yuriko Koike remarked [3] that, “barrier-free facilities are by all means important, but I believe that a barrier-free mind is equally vital.”

Well, fast forward to September 1, 2017—exactly three years before the start of the Tokyo Paralympics—and it turns out barrier-free facilities are indeed vital as Japan attempts to build accessible venues. The Musashino Forest Sports Center [4]in the western Tokyo district of Chofu, the venue for wheelchair basketball, badminton and fencing in the modern pentathlon, has yet to be made accessible. According to [5] The Japan News, “[T]he facility failed to meet a preliminary version of accessibility guidelines compiled in January 2016 by the Tokyo Organizing Committee of the Olympic and Paralympic Games. The guidelines, based on rules set out by the International Paralympic Committee, stipulate tangible standards to ensure barrier-free access, such as the proportion of a venue’s seating that should be set aside for people in wheelchairs and the size of elevators.”

This may have been a case of the government’s left hand not knowing what the right hand is doing, as in mid-August 2017, the Infrastructure ministry reported that it was seeking to strengthen a 2006 law that promoted a “barrier-free” society. Most of the statute was concerned with employment, but also access to government and commercial buildings open to the public at large. As Jiji Press reported, “The ministry is discussing ways to encourage municipal governments to make it a priority to map out plans to develop barrier-free infrastructure in areas that host government offices and commercial facilities used regularly by such people…The agency plans to reflect the results of the discussions in a bill to revise the law. The bill will be submitted to the Diet next year at the earliest, the sources said.”

With only three years to go until the Tokyo 2020 Paralympics, the Japanese government will have to work quickly. The Mainichi reported [6] in April that 80% of the proposed Paralympic venues did not meet the barrier-free standards set by the government, stating that “the number of wheelchair spaces in most existing Olympic venues with permanent seating is below target. Furthermore, all venues that will be used for the Paralympics have failed in this area too.”

Facilities such as train stations will have to be upgraded as well. In a piece for Accessible Japan [7], Kelly Frost, who runs the Adapating Japan [8] blog, quoted her son Dominick, whose brother Xander has spina bifida:

“My time in Japan was overall very fun and interesting, however one main part was not, train stations. It amazed me how hard it was to find the elevator in some stations, with the Paralympics just around the corner. Some stations didn’t even have them. Luckily my brother could walk, so the stations without elevators were not too difficult, but for a person who couldn’t walk at all, some stations would be impossible. It was just amazing how different it was when I was on the trains without my brother: not trying to find an elevator, as stairs were often closer, easily available, and more well marked in English. I hope that when the Paralympics roll around that more stations are accessible.”

Concerns about the Paralympics are shared by others in Japan. Grace Ohashi [9], who was a member of the US judo Olympic team before being diagnosed with multiple sclerosis, and who now lives in Japan, expressed both delight and concern about the Paralympics in a recent television appearance on the NHK Barrier Free Variety Show.

“As a former judoka and disabled person,” Grace said, “being able to welcome the Paralympic Games in Tokyo is a like a dream… I am worried that Tokyo can truly hold the Paralympics. For wheelchair users, it is still difficult to watch such games, wheelchair users are refused access, or the number of wheelchairs are restricted….”

Grace also responded to concerns about the cost of the Olympics and Paralympics, saying, “It's true the Olympics are wonderful, but they cost a lot of money as well. At the same time, I feel that the Paralympic Games are of equal value, too!”

For example, Grace says, whenever a paralympian breaks some sort of record, it represents four years of hopes, dreams and careful preparation—the achievements of paralympians also deserve recognition.

Here’s hoping that the 2020 Paralympics will, with investment from the Japanese government, be truly of “equal value” to the 2020 Olympics.