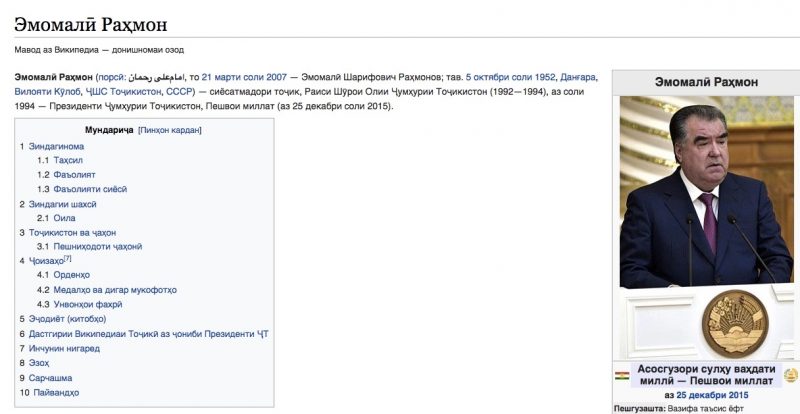 Tajikistan's leader Emomali Rakhmon is looking to grow a reputation as a fastidious man who likes his house in order, so it might not come as a surprise that the authoritarian Central Asian country's language committee has blasted Wikipedia over spelling mistakes on its Tajik language entries. That government officials either do not realise that they can correct the mistakes themselves, or are too lazy to do so, might also not surprise.

#Tajikistan urges Wikipedia to correct Tajik content – apparently unaware it could do it itself v @RFERL https://t.co/sATv38xSs4

Tajikistan's most memorable battle with new media came in 2012 when a top-ranking official summoned Facebook's Mark Zuckerberg to meet him “during office hours”. The government had blocked Facebook over “lies and slander” spread by opposition groups at the time.

Now, once again, Tajik authorities are shooting the messenger, this time because of spelling errors allegedly made by contributors to the online encyclopedia. Language committee official Saodatsho Matrobiyon said on October 2 that the mistakes “must be corrected” or Wikipedia might be challenged under Tajik law.

Ibrohimjon Rustamov, a US-based Tajik who is an active curator and editor of Wikipedia called the statement “senseless” in an interview with RFE/RL:

[Wikipedia] is free and public, it's edited by the world community, sometimes anonymously. It's senseless to demand editing from a source that can be edited by anyone, including by Tajikistan's language-committee specialists.

The language committee has, in the past, warned hundreds of businesses and institutions across the country to correct or change their names according to Tajikistan's state-language law. Dozens of “offenders” have been subject to administrative punishments, including fines.

According to the latest statistics, there are close to 70,000 Wikipedia articles in Tajik. This is the result of hard-working activists such as Rustamov, who have been credited in the past by Rakhmon and other Tajik officials. It is not clear — other than a few misspells — what might have caused the volt-face.

But the committee's protest is consistent with a trend towards petty policy-making in the republic of 8.5 million people. Last month the government issued instructions banning traditional “loud crying” and black clothing among other things at local funerals, while female officials, teachers and students were effectively forced to wear national dress for a month earlier this year.

Such regulations cutting to the core of everyday life have come as Tajikistan suffers under a deep economic crisis linked to low domestic productivity and a dip in migrant remittances sent by over a million citizens working in Russia.

These more important problems — compounded by strident, systemic corruption and nepotism — are apparently problems that the government has no answer for at all.