Seelan Palay was standing in front of the Parliament House while staging a performance piece when he was arrested by the police for “unlawful assembly” . Screenshot of video by The Online Citizen.

Artist and political activist Seelan Palay was arrested by the Singapore police on October 1, 2017 for conducting “unlawful assembly” in front of the Parliament House.

Seelan was standing alone before the Parliament House, holding a mirror as an act of performance art. He was led away by the police and detained until he posted bail the next day.

Although he had obtained a permit to stage the event in Singapore's Hong Lim Park, he was not permitted to do so in front of the Parliament building. A special area of the park, known as “Speakers Corner”, is the only place in Singapore where citizens can legally hold protests — within certain limits. Seelan began his performance there, but then proceeded to the Parliament building.

A communications manager with media NGO Engage Media and contributor to Global Voices, Seelan's performance, entitled “32 Years: The Interrogation of a Mirror”, honored former Parliament member Chia Thye Poh who was detained for a total of 32 years without being charged in court. He spent 23 of these years were behind bars and the other nine under house arrest. Chia was arrested in 1966 for allegedly leading pro-communist activities in the country and had become the longest-held political prisoner in the world upon his release in 1998. Chia was also a critic of the ruling party which has been in power since the 1960s.

During his performance, Seelan questioned the detention without trial of an elected official for 32 years. He asked: 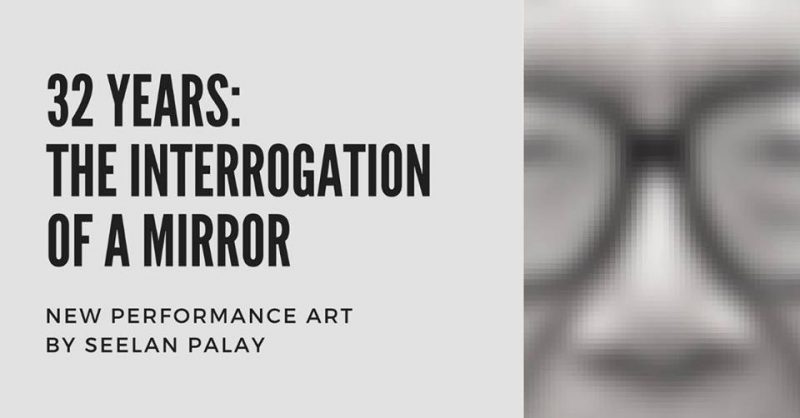 Seelan's performance art at the Hong Lim Park was announced on Facebook.

After beginning his performance piece in Hong Lim Park, Seelan walked a two-kilometer distance to the National Gallery and finally to the Parliament House, all the while holding a mirror with a drawing that represented Chia Thye Poh's 32 years in detention. After 30 minutes, about 12 members of the police arrested Seelan for “unlawful assembly”, despite the fact that no other person was participating in the performance.

Under Singapore’s strict Public Order Act, a single person can be held liable for participating in an illegal assembly.

The photos below show that Seelan was alone before he was arrested by the police.

Nevertheless, under Singapore’s strict Public Order Act, a single person can be held liable for participating in an illegal assembly.

Seelan was released on October 2. He posted this message on his Facebook page:

Thank you all for your kind words of support. Art is unstoppable!

The incident has triggered criticism from social media users and civil society, particularly in the wake of other recent arrests of people engaging in public art and demonstrations. In June, police investigated activists who participated in a creative demonstration on a city metro train, calling attention to a series of detentions by the Internal Security Administration that took place in 1987.

Following Seelan's detention, some criticized the ruling People's Action Party (PAP) for being intolerant of dissent:

PAP's biggest threat comes from defiance and mass protest. So insecure they are that even a protest by a single person is heavily handled.

What we witnessed and experienced yesterday confirm beyond a doubt that Singapore is a police state and state terrorism is rampant. Freedom of assembly, speech and expression are merely empty promises of the government. When police officers threaten arrests for everything and believe that they have such power, where is the rule of law that our government and judges keep boasting to the world?