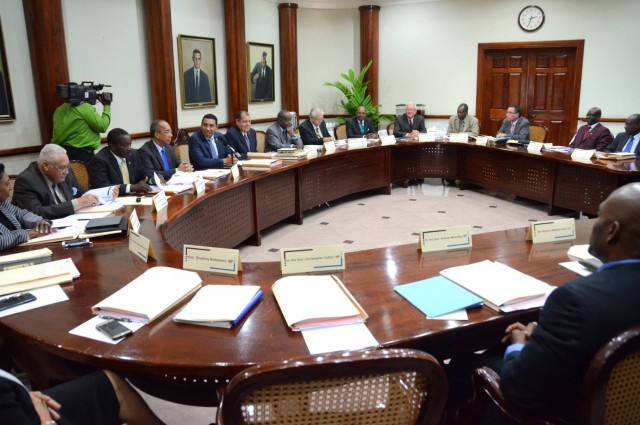 Jackson Miller referred to concerns expressed by Political Ombudsman Donna Parchment Brown over a J $600 million road project (about US $4,644,000), scheduled to happen in a rural constituency with a pending, hotly contested by-election. The seat had fallen vacant after the sudden passing of Opposition Member of Parliament Winston Green, who won by a mere five votes in the 2016 general elections.

Questioned about the curious timing, the prime minister, who was expected to announce the dates of the by-election on October 1, 2017 and had repeatedly denied any connection between the works and the upcoming elections, responded: “I would say [the Ombudsman's concerns] are not valid.” He noted a “general concern about how public resources are spent, particularly closer to an election, for partisan benefit” and said he was willing to discuss the matter further at planned bipartisan talks with the opposition.

It is difficult for anyone to shrug off Dionne Jackson Miller. She hosts two popular current affairs programs on Radio Jamaica (RJR) and Television Jamaica (TVJ), and is also president of the Press Association of Jamaica (PAJ). Her employers are the powerful RJR/Gleaner Communications Group (the two media houses merged in 2015).

Pressed again therefore, Prime Minister Holness mentioned two government agencies without referring to the ombudsman — the Office of the Contractor General (OCG) and the National Contracts Commission (NCC) — explaining that he answers to them in matters like these. The OCG is already monitoring the project after strong objections from the opposition People's National Party (PNP).

Holness denied that his administration was using state resources to boost his party's chances in the by-election, adding, “There is no basis for anyone to lodge any complaints for political abuse of public resources”.

Two days later, a front page headline — “Not You, Madam! — in the Gleaner newspaper raised some hackles in political circles, and sparked social media discussions, as well as strong criticism from another media house, since it was not a direct quote from the prime minister.

A letter from Holness’ director of communications titled “Misleading NOT YOU MADAM! Reportage” was soon posted on Twitter:

The letter objected to the “substance, tone and tenor” of the article, concluding:

The misleading reportage has created a negative perception among some members of the public that the Prime Minister has disrespected the Office of the Political Ombudsman. This is not so.

Seeing that there is no media complaints council, as was supported by you in March 2015…and that the relevant questions were asked by you, we seek your intervention as PAJ President and a leading member of the RJR/Gleaner Communications Group to provide clarity to the public…

We also invite you as PAJ President, senior journalist and lawyer to offer your experienced guidance to colleagues who may have breached the principles of fairness which should attend upon good journalism.

Jackson Miller wasted no time in responding, and tweeted a sharp retort in letter form a few hours later:

Since you have worked in media, I am quite sure you understand editorial processes, and how newsrooms work. I am therefore at a complete loss as to why you would think it appropriate to call on me to ‘clarify’ an article I neither wrote nor edited, and that was not carried on either of the programmes which I produce and present…

You state that the questions to which the Prime Minister responded were asked by me, and then make the completely illogical and astonishing leap to suggest that this should, at least in part, form the basis for my intervention to ‘clarify’ a story I had absolutely nothing to do with.

I have no idea why you felt it necessary to mention the fact that I am a lawyer. If you believe there are legal issues involved here, surely you should be corresponding with the legal counsel of the RJR Gleaner Communications Group (who is not me).

Thank you for your kind invitation for me to offer guidance to my colleagues. I would like to assure you that this type of discourse takes place regularly in the media community.

You are, of course, quite within your right to share any concerns you have about any article or publication by any media house. The right of freedom of expression surely belongs to those who wish to criticize the press, as much as to anyone else.

The newly appointed head of the Media Association of Jamaica, Christopher Barnes, who works at the same media house as Jackson Miller, defended the PAJ's stance in a radio interview.

The response raised some eyebrows:

I was taught that when you are upset never respond in writing nor speech. What a piece of ‘tracing’ from the learned lady?!

During an interview with talk show host Cliff Hughes on a rival radio station, Jackson Miller refused to comment, as Press Association head, on whether the article — or the headline — was fair, saying Jamaicans should make up their own minds. She noted that kind of criticism is the role of a media complaints council – a mandate the PAJ does not have, although it supports the creation of such a body. She added that the Office of the Prime Minister should have responded directly to the media house.

When the media gets it wrong, as with @JamaicaGleaner & this story re Ombudsman & the PM, media needs to retract & apologize. https://t.co/NrEYF9NBtS

He also suggested that egos were at play in the debate:

The Gleaner itself stoutly defended its headline and story in two editorials on September 24 and September 27, even tweeting an excerpt from the second one:

I am disappointed with the structure of this response. The bottom line is that the PM didn't utter the words in the headline. #justsaythat

A letter to the Jamaica Observer newspaper commented on the oft-discussed media complaints council — an idea that has apparently been shelved — urging:

Now, step up to the plate, get moving in constituting an oversight body and ensure it is free to function effectively.
After all, you would require no less from others.

What about political responsibility?

Despite all of this, there were questions on the other side. Returning to the original bone of contention, commentator and attorney-at-law Linton Gordon referred to the prime minister as “aloof, arrogant and high-handed” and urged him to spend money on the road works after the elections.

@djmillerJA why the office holder cant be a “voluntary” one in service to country for and for terms limit? 22mil for what?!!! Kmt

No wonder we are in the state we are in. U know how much 22mil could do to security, health or education?

At this point, the two sides appear to be at stalemate (or perhaps there is a truce), but Jamaicans on the sidelines have had plenty to say, as usual, on media-related topics. This discussion took on several dimensions — beyond the headlines — which, funny enough, is the name of Jackson Miller's radio show.