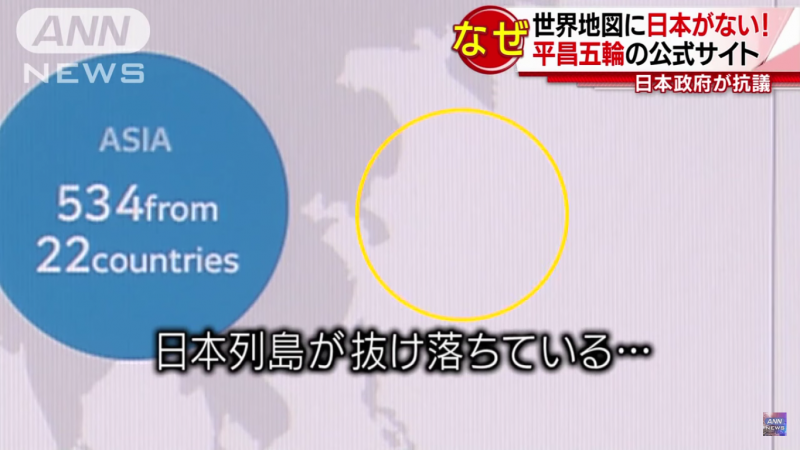 The omission of Japan from a map on the official web page of the upcoming 2018 Winter Olympics in PyeongChang, South Korea has provoked outrage in Japan, and exposed deep resentment against its neighbor.

On Wednesday, September 27, 2017, the Japan Sports Agency, which supports Japan's Olympic athlete program, reportedly noticed a map uploaded by the PyeongChang 2018 Winter Olympics organizing committee had omitted the Japanese archipelago. It already lodged a complaint via the South Korean Embassy in Tokyo, according to the Associated Press.

Since the February 2018 Winter Olympics will be held in neighboring South Korea, Japan's omission from the map was quite noticeable.

While the Pyeongchang organizing committee reportedly explained the omission of Japan on the map was a “simple mistake” caused by changes in image files when organizers updated the Olympic website in February, the gaffe went viral in Japan, resulting in television coverage and a hashtag on Twitter, #PyeongChang2018HomePage (‘#平昌五輪HP’).

There was also a highly visible protest by the Japanese Cabinet itself which officially rebuked the PyeongChang Olympic organizing committee.

While the map was quickly fixed, it did not stop online resentments from seething on social media. Manuronald, a member of the online blogging site Naver Matome, collected some of the tweets in a post that has been viewed nearly 250,000 times. Most of the comments Manuronald collected expressed deep cynicism on whether the omission of Japan was merely a simple mistake.

After people noticed Japan wasn't on the map on the PyeongChang Olympic website they fixed it, lolololol

Other tweets suggested that Japan simply refrain from participating in the Winter Games in February 2018.

While it would be totally unfair to the athletes who have trained so hard (for the Olympics), if this sort of thing happens it's unlikely the judges are going to be impartial. It's pretty easy to imagine ways in which Japanese athletes could be slighted (at the Games), so I think it would be better if Japan just do not participate.

One Twitter user suggested that the ongoing tensions on the Korean Peninsula as the North Korean regime tests ballistic missiles and nuclear devices may end up affecting the games anyway.

While I don't want to see a war and don't want to see people die, maybe the North Korean military, which is located just across the border, will “pause” those games. Maybe they could reschedule the games another year for a post-Olympics, to give the athletes a chance. I don't hate Koreans, but I detest the South and North Korean governments.

There is also another ongoing dispute between Japan and South Korea over what the body of water commonly referred to as the Sea of Japan should be named. South Korea insists it should be called the ‘East Sea.’

On one of the pages on the site, Takeshima in Shimane prefecture is called “DOKDO”, while the Sea of Japan is called the “East Sea.”

For now, with Japan re-added to the map, the controversy has died down, but some Japanese netizens continue to harbor resentment and often outright hatred towards South Korea.