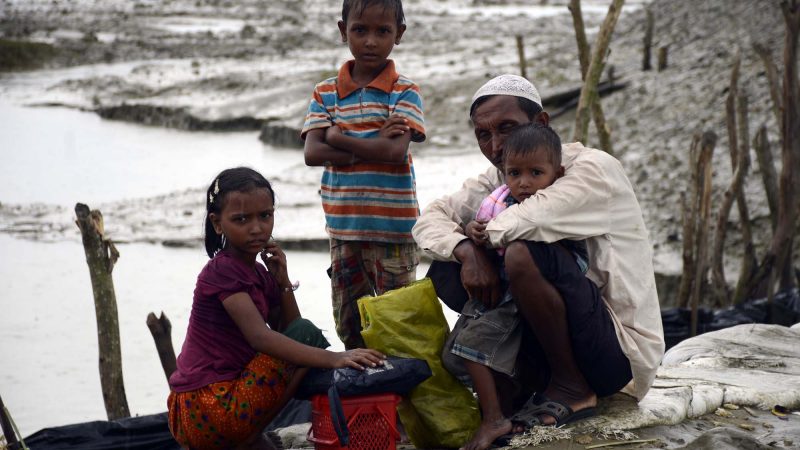 Rohingya refugees escaped to Bangladesh after the recent crackdown in Myanmar. Image by Syed Rajowan (এস রেজওয়ান). Used with permission.

The monks allegedly threatened a group of 31 Rohingya refugees including 16 children and 7 women, calling them terrorists. Authorities quickly escorted the refugees into protective custody and relocated them to a safer place.

31 Rohingya refugees at Mt. Lavinia to be taken to Boossa detention camp by Police for their safety after a mob stormed their UN safe house.

Sri Lanka has mostly stayed silent regarding the recent Rohingya crisis in Myanmar. Only a few days ago Sri Lankan Prime Minister Ranil Wickremesinghe announced the country will not accept any Rohingyas as refugees and existing refugees will eventually be resettled in a different country.

Only a few hundred Rohingya refugees currently stay in Sri Lanka and the majority came to Sri Lanka by boat and air following the disturbances in Myanmar in 2012. Others were rescued by the Sri Lankan navy last May from Sri Lanka's northern shores and kept in a UN safe house in Mount Lavinia until their resettlement.

According to international reports, the hardline nationalist group Sinhale Jathika Balamuluwa showed the attack live on their Facebook page with over 30,000 followers. The video showed the monks and a few civilians entering the safe house chanting “do not allow terrorists into this country.”

Several others uploaded footage of the Buddhist monk-led attack against Rohingya refugees on Youtube by users such as sonakar.com:

All the refugees escaped the attack without injury, but two police officers were wounded and admitted to hospital.

The government of Buddhist-majority Myanmar does not recognize the Rohingya people among the country’s ethnic groups and denies them citizenship. They are often described as the “most persecuted minority group in Asia.” Authorities and Buddhist nationalists consider Rohingya as illegal immigrants from Bangladesh, even though they have roots in the Rakhine state that go back centuries.

Since August 2017, about 400,000 Rohingyas have fled to Bangladesh after Myanmar's military crackdown on insurgents belonging to the Arakan Rohingya Salvation Army (ARSA). ARSA was accused of attacking several police and military outposts which then led to the burning of Rohingya villages and attacks on civilians.

Some Sri Lankan Buddhist monks share similar extremist views with their ultra-nationalist counterparts in Myanmar when it comes to minority Muslims and created a Facebook page to express those views. Sri Lankans also offered sympathy to Myanmar on the Rohingya issue specifically:

Srilanka stand for #Myanmar regarding #Rohingya crisis in #Rakhine pic.twitter.com/vQY9LWxiqj

However, the attacks were strongly condemned by the Sri Lankan government. Cabinet spokesman Rajitha Senaratne said:

“This is not what the Buddha taught. We have to show compassion to these refugees. These monks who carried out the attacks are actually not monks, but animals.”

And via a tweet by Azzam Ameen, the minister also lamented:

“2 million Sri Lankan's went to other countries as refugees, ashamed that we can't even look after 30 people temporarily” Minister Rajitha

The minister committed to taking disciplinary action against officers who failed to control the mob. Other government officials expressed condemnation but the President and Prime Minister have yet to issue a statement:

Statement in English by the Minister of Finance and Media @MangalaLK on the #Rohingya #Refugees in #SriLanka pic.twitter.com/musVZnBeTI

“I condemn these actions as a Buddhist who is very proud of the fact that Buddhism is a religion of non violence & Compassion”. My statement on Rohingya refugees in #SriLanka . #UNHCR https://t.co/TxOQuk6Mnd pic.twitter.com/l26oTZHAl4

WHO is in charge of #lka law & order? @SagalaRatnayaka or saffron-robed thugs who attack #Rohingya refugees with impunity? @UNHumanRights https://t.co/46Gi18HoSh

Sri Lanka and its Foreign Ministry had never failed to promptly condemn explosions and bombings in far-away Western capitals but terrorizing a half million men, women and children into fleeing their generational places of birth, closer home in our Asian neighborhood, has not struck the conscience of good governance, the professionals, the academics, the civil society and women’s organizations in Sri Lanka.

Sam Kosai, of Yangon, Myanmar expressed his frustration with the irony of a violent Buddhist attack against Rohingya refugees in Sri Lanka:

Our brothers in Sri Lanka joined Burma to give Buddhism shame and a bad name. Bravo! Well done! Being Facist alone is no fun. The more the merrier.